Ray and I had a beautiful experience Monday afternoon and evening. I mentioned yesterday that we had somewhere to go that day that would be difficult for Mother. That somewhere was an outdoor wedding at 4:00 in the afternoon at Standing Stone State Park about half an hour from our house.

As it turned out, I was right. All the rocks and roots and steps we walked on that evening would have been a challenge for Mother, but, oh, I am so thankful that Ray and I were there.

It would have taken a whole lot for me to miss it, because I had a very special role to play at this wedding. I have played just about every other role imaginable already. I’ve already been a flower girl.

Clara was beautiful and adorable, and she dropped her petals just right. And, when the ceremony was over, she jumped off the stage in the fun way that the bride and groom and each pair of bridesmaids and groomsmen had done.

Actually, I did have a somewhat official role. Just before the ceremony, Mary Evelyn (who was serving as the wedding coordinator for her friend the bride) asked me to sit on one side of the front row, so that Clara could come to sit with me after her flower girl duties were finished. Ray and I were happy to oblige and we sat down where were were told.

The wedding setting was just beautiful. A small, rustic wooden stage sat at the bottom of a hill which was reached by 49 steps — I know because Mary Evelyn told me so. In front of the stage were about ten rows of wooden benches. Behind that was a semi-circular tarp where people sat on the ground. Behind that people stood.

Well, almost as soon as Ray and I sat down, and before the ceremony began, a young man came to the front of the benches and announced that they were only for pregnant women, people with several children, or old people. I kept my spot–convinced I did not fit into ANY of THOSE categories.

It turned out to be just the spot where Ray and I needed to be because, when little Clara whispered to her designated bridesmaid that she needed to go potty right in the middle of the ceremony, I got a wonderful picture of her before grabbing her up and starting up the 49 steps. Mary Evelyn met us and took care of the situation right away, while I returned to my seat in the pregnant-many children-old folks section. Clara was back on duty well before the ceremony was finished and in plenty of time to jump off the stage as directed.

Alia the bride and Timothy the groom met at an English country dance party at our house on the 4th of July a few years ago. Our family has known Alia and her sister Elizabeth since they began performing in Mary Evelyn’s plays when Alia was about eleven years old. Their mother became our friend. When she died unexpectedly almost exactly two years ago, the girls asked Ray to perform the funeral.

Ray and I were surprised when we heard that the outdoor wedding was planned for 4:00 on a Monday afternoon in March. We wondered how many people could make it then and how it would all turn out. Our questions were all answered on Monday. The crowd was large. The weather was perfect–the 20% chance of rain that was predicted held off until the happy couple drove away for their honeymoon. In fact, the wedding and the reception were perfect in every way that I could see. 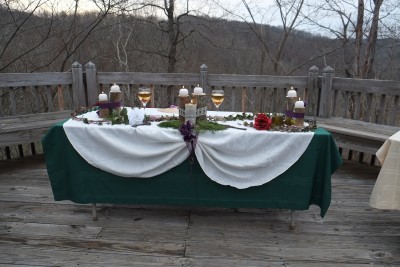 I cried only once, and that was when I read these words from Alia on the program, words that explained exactly why the wedding was on this particular day:

About two years ago I was talking with my mother about her upcoming birthday. After much discussion she said, “Let’s not do much this year. We can have a big party for my 50th.” Now she is in a better place. But help us to make this a “big party” anyway.

We did just that. 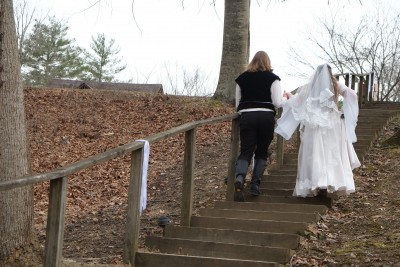 He who finds a wife finds a good thing
And obtains favor from the Lord.
Proverbs 18:22