Meeting homeschooling New Englanders at the MassHOPE convention last weekend was a blessing to Ray and me. Between the two of us, Ray and I met homeschoolers from every New England state: Connecticut, Maine, Massachusetts, New Hampshire, Rhode Island, and Vermont. I was impressed by the self-sacrifice of those who serve in leadership roles with MassHOPE and in other states.

I was particularly blessed by meeting some of you blog readers. Thank you very much for stopping by and chatting with me. Your faith and your commitment to your children encouraged me and I loved your stories.

I have to confess that I was apprehensive about this convention. I was afraid that when I opened by Southern mouth, I would sound like a country bumpkin to these New Englanders; but they were so welcoming and gracious that I felt quite at home and can’t wait to come back.

Enjoying history as we do, Ray and I took advantage of the opportunity of being in the Boston area to do some sightseeing. We arrived in Boston last Wednesday night and left the train station on foot to find our hotel two blocks away. We pulled and tugged our compact, but heavy, luggage along the sidewalk, and with only one trip back inside the station for one more attempt to find good directions, we made it. We got up early to pick up our rental car in the parking garage around the corner and off we went into the infamous Boston traffic to find the Massachusetts State House.

Finding it turned out to be easier than finding a parking space. As we inched along on that quest, we drove past Boston Common, which is the expanse of green behind this fence. 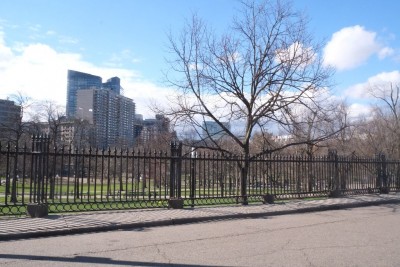 A monument beside the Commons caught my eye. This is a close-up of its inscription:

It begins with quotes from the early colonists John Winthrop, a Puritan, and William Bradford, a Pilgrim Separatist. Puritans wanted to purify the Church of England while Separatists wanted to separate from it. Both came to America in the pursuit of religious freedom.

Here are their words in their original spellings and punctuation (or lack thereof) as they appear in the inscription:

THUS OUT OF SMALLE BEGININGS GREATER THINGS HAUE BEEN PRODUCED BY HIS HAND THAT MADE ALL THINGS OF NOTHING . . . AND AS ONE SMALLE CANDLE MAY LIGHT A THOUSAND SO THE LIGHT HERE KINDLED HATH SHONE TO MANY YEA IN SOME SORTE TO OUR WHOLE NATION — WILLIAM BRADFORD AT CHARLES-TOWNE 1630

Following these quotes are these words:

IN GRATITUDE TO GOD FOR THE BLESSINGS ENJOYED UNDER A FREE GOVERNMENT THE CITY OF BOSTON HAS ERECTED THIS MEMORIAL ON THE THREE HUNDREDTH ANNIVERSARY OF ITS FOUNDING — SEPTEMBER 17, 1630 –1930

My experience at MassHOPE assured me that homeschooling parents in New England are rearing children to be cities set on a hill. Every time I go to a homeschool convention, I feel hope for a world in darkness. You are doing very important work every day. You are building cities to be set on a hill; you are lighting lights for the world. I pray that God will prosper you in that work and that your family and mine will continually be those cities set on a hill throughout every generation. As Jesus told us:

You are the light of the world.
A city set on a hill cannot be hidden;
nor does anyone light a lamp and put it under a basket,
but on the lampstand,
and it gives light to all who are in the house.
Let your light shine before men in such a way
that they may see your good works,
and glorify your Father who is in heaven.
Matthew 5:14-16