God provides everything we need. Among the many resources God has supplied us are the minerals He has placed beneath the ground. Man has been using those minerals since the beginning. By the fourth chapter of Genesis, Tubal-Cain was forging instruments out of bronze and iron.

For thus says the Lord,
who created the heavens
(He is the God who formed the earth and made it,
He established it and did not create it a waste place,
but formed it to be inhabited),
“I am the Lord, and there is none else.”
Isaiah 45:18

When God led the Israelites to the Promised Land, He promised to provide for them.

For the Lord your God is bringing you
into a good land,
a land of brooks of water,
of fountains and springs,
flowing forth in valleys and hills;
a land of wheat and barley,
of vines and fig trees and pomegranates,
a land of olive oil and honey;
a land where you will eat food without scarcity,
in which you will not lack anything;
a land whose stones are iron,
and out of whose hills you can dig copper.
Deuteronomy 8:7-9

One of the resources God has placed underground is coal. Mining of coal goes back 250 years on Cape Breton in Nova Scotia. During our recent trip, a fourth generation coal miner led our tour into a real coal mine under the Miners’ Museum at Glace Bay.

If you have ever heard the coal mining song, “Sixteen Tons,” by Tennessee Ernie Ford, you know that a coal miner once felt: “I owe my soul to the company store.” Sadly, abuses of coal miners by coal companies happened not only in America, but in Canada, too. Our guide told us about the coal company owning the workplace, the houses, the company store — everything except the families, the churches, and the love of friends and neighbors. Most, if not all, men owed more to the company store than they earned in the mines.

Signs warned of the dangers miners faced in the mines. 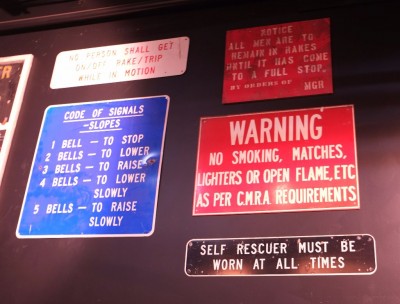 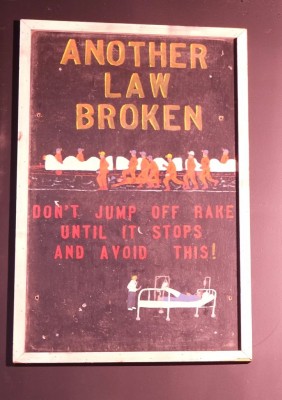 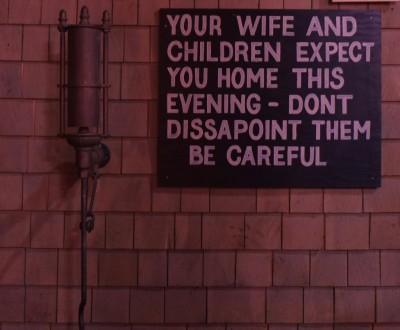 The ceiling was high when we first stepped inside. 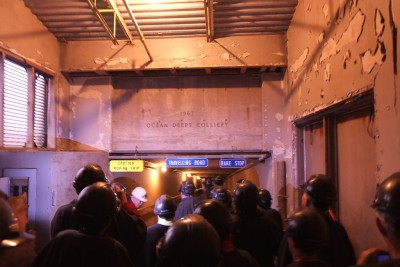 Later we entered an area where the ceiling was only four and a half feet tall.

The coal mine at the Miners’ Museum is no longer in operation. 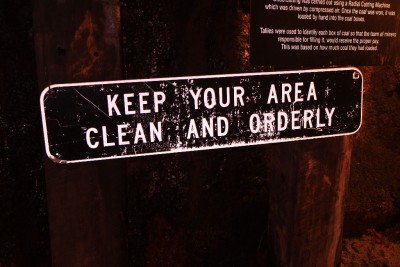 Boys began working in the mines as young as eight years old. One job that a boy performed was opening and closing this door, which was crucial for making sure that the air inside the mine remained breathable. 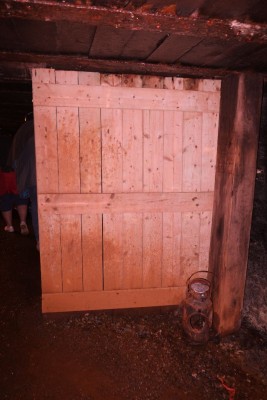 Though our guide told us about the hard realities of working in a coal mine and being part of a miner’s family, he did so with joy and made the experience fascinating. 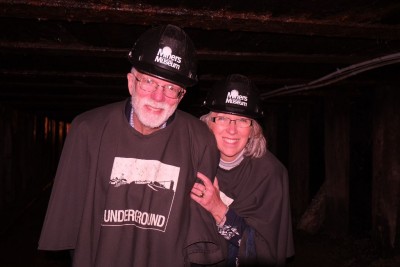 And when our tour was over, as I told you recently, he made sure we got to bring home the music of voices who, like him, once spent their days in the deep. 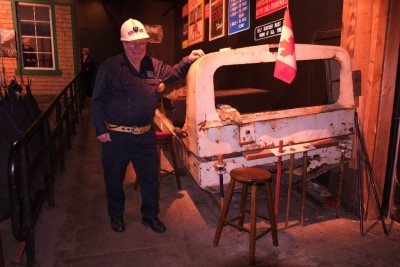 For the Lord is a great God
And a great King above all gods,
In whose hand are the depths of the earth,
The peaks of the mountains are His also.
The sea is His, for it was He who made it,
And His hands formed the dry land.
Psalm 95:3-5