The Homeschool Dramatic Society’s run of Street Robber closed Saturday night after its closing performance to HDS’s first-ever sold out crowd! Afterwards, Mary Evelyn and I continued one of our longtime traditions of getting a mama-daughter photo. 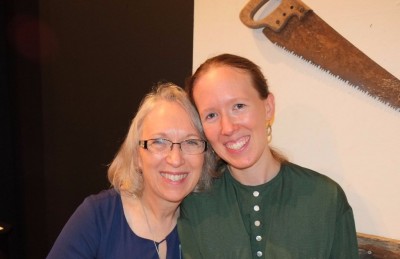 I met a mama whom I had never met before. She told me that her fifteen-year-old daughter who has Downs Syndrome watches DVDs of past HDS productions. She enjoys acting out scenes and performing the dances.

This year she and her husband decided to make the three-hour drive from north Alabama to bring their daughter to see Saturday night’s performance in person. When they came near the theater, she called the theater staff to find out where to park. At first, the ticket seller told her that the performance was sold out. Then, he told her that someone had just turned in three tickets and that they could have those seats! I’m so grateful that they didn’t drive all that way just to have their plans thwarted near the entrance.

I floated for the rest of the evening with the joy of that story. At church yesterday, a new Christian talked to me with tears in her eyes about her reactions to the play. She also told me that her daughter-in-law and two grandchildren had intended to be there with her but they had experienced a glitch and weren’t able to come after all. When my friend went to the box office to turn in their three extra tickets, the ticket seller was on the phone with someone and had offered them the tickets!

Mary Evelyn and I are sad that for the first time, some people were turned away on Saturday night, but we are grateful it was not that family from north Alabama!

Part of the HDS arrangement with the performing arts center is that all the sets and props (and the miscellaneous items 109 children and their families and the backstage crew have left lying around after two weeks) be removed from the facility immediately after the performance. About 1:00 a.m. Sunday morning that job was complete, the cast party was over, and Mary Evelyn was almost home. When we chatted briefly then, she was already planning a Saturday afternoon matinee so more people can see next year’s play!

Two aspects of this story make me think of you.

As a mama, you are living a tiring, rewarding, challenging, uplifting adventure every day. I’m thankful that you aren’t missing the priceless encounters along the way!

“Again, the kingdom of heaven
is like a merchant seeking fine pearls,
and upon finding one pearl of great value,
he went and sold all that he had
and bought it.”
Matthew 13:45-46