Ray and I woke up in one of our favorite places this morning. Last year we got pushed out of town on our anniversary because all our plumbing had to be flushed to kill ecoli! This year we decided to end our trip to see John and his family in Missouri with a four-day-late anniversary gift to each other–New Year’s Eve at the New Harmony Inn in New Harmony, Indiana.

When I had been out of college for four weeks and Ray and I had been married for three, I found a job in my college major. It was a good thing; I don’t know how we would have made it on Ray’s $270 a month graduate school stipend.

I digress. My first planning assignment was for an Indiana county that included the port town of Mount Vernon along the Ohio River. Within the county was a teeny town called New Harmony. New Harmony had been the home of two separate utopian experiments during the 19th century. Developers had recently begun to restore some of the old buildings and had constructed the New Harmony Inn to house visitors.

I needed to go to Posey County to do research and my boss let me plan the trip during Ray’s spring break. We stayed in the New Harmony Inn. We were babies really. Ray was 22 and I was 21. I looked so young that on another project a state government employee in Frankfort, Kentucky, asked me if I was doing a report for high school.

Ray took me back eighteen years later for my 39th birthday and now we try to get back every few years. One time in the late 1990s, we took John, Bethany, and Mary Evelyn, too. Here is a photo from 2011, taken in one of New Harmony’s pretty gardens. 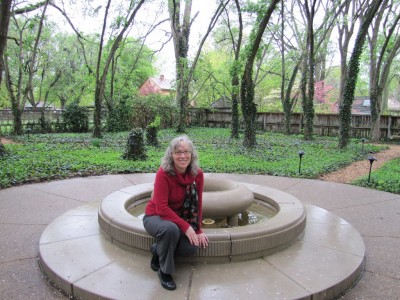 The two utopian experiments in New Harmony could hardly have been more different. George Rapp led his German religious sect called Harmonists to 20,000 acres of land along the Wabash River in 1814. The Harmonists believed in Christ’s imminent return. Rapp’s 800 followers worked together to build a thriving economy and traded goods as far away as New Orleans and even overseas. Together they built the town of Harmonie, including 180 structures. Among the several buildings that still stand are the granary. . . 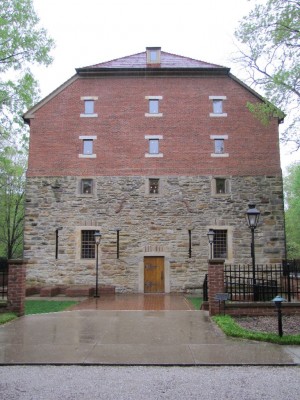 . . .  and this building which served as one of the men’s dormitories.

Many people through the centuries have tried to create utopia on earth. It is tempting to think we can scurry away to a beautiful place with people who think like we do and build utopia. The idea even surfaces from time to time among homeschooling families.

Ray and I have visited utopian communities in Amana, Iowa; Rugby, Tennessee; Hilham, Tennessee; Shakertown, Kentucky; and New Harmony. None has lasted. It seems to me that the closest thing we get to utopia on earth is when Christ becomes our Lord and the kingdom of God reigns in our hearts.