Our family has been celebrating the life and writings of Laura Ingalls Wilder this year, the 150th anniversary of her birth. We have published a video about her life, plus several videos about places she lived. You and your family can watch those free videos, as well as other history videos, here.

When Ray and I realized that Almanzo’s boyhood home near Malone, New York, was only a couple of hours from Boucherville, Quebec, we decided to make a visit. While we were there, we filmed footage for one more Laura video for homeschooling families. We don’t have that video scheduled yet, but I expect us to publish it before the end of the year. Meanwhile I thought you would enjoy hearing about Almanzo’s home and seeing some pictures.

The Wilder home outside of Malone is the only original Little House home that is still in its original location.

The Almanzo & Laura Ingalls Wilder Association of Malone owns most of the original farm of about 80 acres and has reconstructed the barns, using the drawings that Almanzo made for Laura while she was writing Farmer Boy.

The association has also constructed this visitor center and museum. During our visit, we saw the young woman who worked in the gift shop taking a break outside. She was reading one of the Little House books!

The museum has fascinating displays for Laura fans, including:

The Almanzo & Laura Ingalls Wilder Association has posted passages from the books and illustrations by Garth Williams beside artifacts in the museum, the barn, and the house. Near these examples of milking stools . . .

. . . is an illustration of Almanzo milking Blossom.

. . . is an illustration of Almanzo with his oxen Star and Bright.

The hands-on opportunities are fun. The pump was in need of repair the day we visited, but . . .

What a thrill it was to step across the threshold into Almanzo’s childhood home — to stand in the kitchen where his mother cooked such great quantities of delicious homemade food . . . 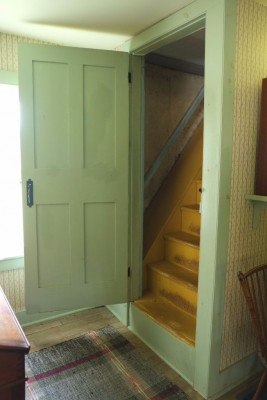 . . . to the attic where Almanzo and his father made shingles on a shaving bench . . . 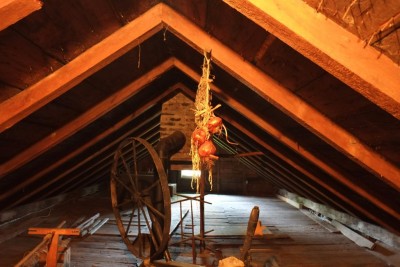 . . . and to learn that restorers found a black spot under the wallpaper on the wall. Was this where the blacking brush landed that frightening day when Almanzo threw it at his sister Eliza Jane and hit the wall and she repaired the paper so he wouldn’t get in trouble?

After touring and filming all afternoon, Ray and I walked down to the beautiful stream where Almanzo and his father went fishing on rainy days. 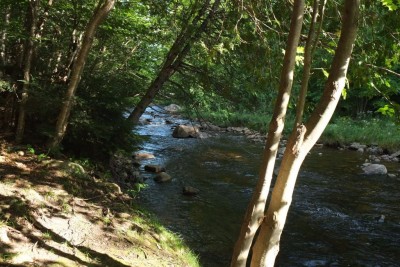 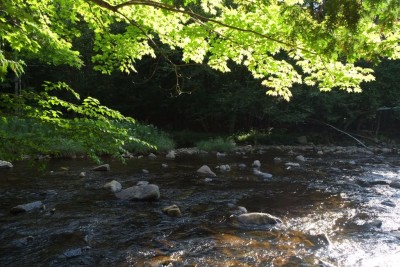 The New York Library Association has honored the work of Laura Ingalls Wilder by placing a Literary Landmarks plaque at Almanzo’s childhood home. It tells that Almanzo lived and worked on this farm from his birth in 1857 until 1875 when his family moved to Minnesota. 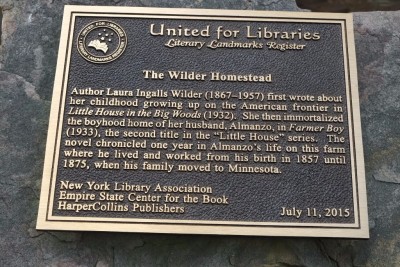 Her children rise up and bless her;
Her husband also, and he praises her, saying:
“Many daughters have done nobly,
But you excel them all.”
Proverbs 31:28-29