Malone, New York, had already been incorporated for 55 years when Almanzo Wilder was born in 1857. Today Malone has almost 6,000 residents. Ray and I spent the night there the night before we visited Almanzo’s childhood home.

On our way to the homestead, we passed the county fairgrounds in Malone, which is in Franklin County. 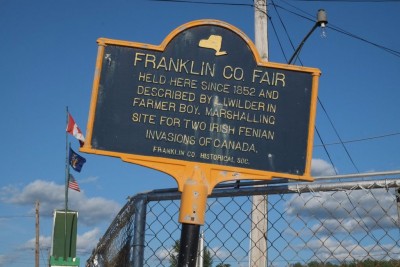 The flags of the United States, New York state, and nearby Canada flew above the entrance.

Yesterday morning when I sat down to begin this post, I read once again the “County Fair” chapter in Laura Ingalls Wilder’s Farmer Boy, and once again I was reminded why I love these books. Many years ago my friend Arlene told our young Bethany not to let her childhood go by without reading Little Women. With the same feelings Arlene had for Bethany, I encourage you not to let your homeschooling years go by without reading Farmer Boy (and the other Laura books, too) aloud to your children.

The Wilder homestead is a good little piece from the village of Malone. According to Farmer Boy, on one frosty morning the Wilder Family dressed in their Sunday best (except for Mother who was going to help with the church dinner and wore her second-best) and drove in their buggy that good little piece to the county fair.

In the buggy were the canned goods and embroidery Almanzo’s sisters were entering in the fair. Mr. Wilder had taken Almanzo’s milk-raised pumpkin in the wagon the day before because the pumpkin was too big for the buggy.

When the Wilders arrived at the fair, it was bustling with buggies, wagons, and people, also dressed in their Sunday best. While Royal joined his friends and Mother and the girls headed to the church’s fairgrounds kitchen, Almanzo and his dad explored the fair together.

These scenes from the “County Fair” chapter in Farmer Boy are good examples for modern mamas and daddies.

But when Jesus saw this,
He was indignant and said to them,
“Permit the children to come to Me;
do not hinder them;
for the kingdom of God belongs to such as these.
Truly I say to you,
whoever does not receive the kingdom of God like a child
will not enter it at all.”
And He took them in His arms and began blessing them,
laying His hands on them.
Mark 10:14-16