When Ray and I want to get to 4446 Tookeykoochey Way in Bald Bend, Kentucky, or some such (I just made that up; don’t try to find it!), we do it the new fashioned way. We look it up on a navigation app on our phone. It’s not fail proof, but that lady who tells us when to turn left, turn right, and merge usually gets us where we want to go.

But, when we have a chance to be on an adventure, Ray makes sure to tuck our ratty Rand McNally Road Atlas between the console and the passenger seat. Navigation devices are fine when you want to know how to get where you know you want to go, but you can’t beat a road atlas to find out how to get where you didn’t know you wanted to go until you spotted it in those tiny letters in a Rand McNally Road Atlas.

I don’t guess we would have ever heard of the Vesterheim Norwegian American Museum in Decorah, Iowa, if we hadn’t been looking at a Rand McNally in between a couple of homeschool conventions a few years back. We had a sweet visit there, and I can’t tell you how many times that museum pops into my head. It happened again yesterday.

Here’s a field trip idea for you. If you are going between some point a and point b sometime soon, get an old fashioned copy of Rand McNally and let your kids read the small print near the route.

Then maybe you can google it, find the exact address, and navigate there the new fashioned way. Don’t just drive past it; plan to stop in and see what you can learn. If you don’t have any point a to point b plans anytime soon, you can let your kids read the Rand McNally small print near your home to find some place right under you nose where you have never been. 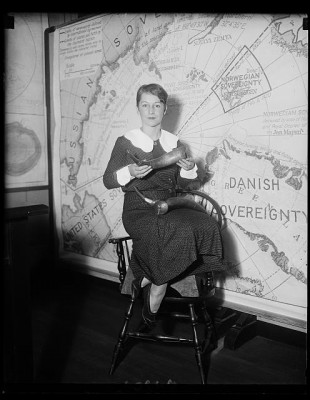 I found this 1930 image on the Library of Congress website last night. The caption reads: “The old and new in maps. Quite a contrast between the modern map in the background and the powder horn map being held by Miss Betty Jones at the Library of Congress.” Powder horn maps were popular during America’s frontier days. It was a multi-function device. Folks could carry their essential black powder for ammunition inside and read the map carved into the outside. As to the modernity of the the map behind Miss Jones . . . Well, it was 1930.

God has always wanted us to have a guide to where we are going — so much so that He gave us His word . . .

Jesus said to him,
“I am the way,
and the truth,
and the life;
no one comes to the Father
but through Me.
John 14:6