The opportunity to experience a small taste of port cities again and again was a delight to us Tennesseans. Though most of our ports were in Canada, we were able to experience cultures from many places because ports, of course, are places where people and goods come together.

Just inside the door of Market Square was a bulletin board. Two of its notices revealed one thing Americans and Canadians have in common and one that we don’t.

Inside Market Square were shops, a library, and a museum — a great combination under one roof. Stained glass windows inside the library illustrated history and poetry.

Ray collects bookmarks. When he asked if the library had one, the clerk gave him a Saint John public library library card instead!

In America the Beautiful, we have an American landmark lesson entitled “Carnegie Libraries.” When Andrew Carnegie was a boy, he benefited from the generosity of a Colonel James Anderson who opened his personal library every Saturday to any working boy who wanted to borrow a book. Young Carnegie decided that if he ever became wealthy he would provide similar opportunities to others. When he did become wealthy, he kept this commitment, helping to build libraries in hundreds of cities. Near the stained glass windows in Market Square’s public library was a portrait of Andrew Carnegie, whose gift of $50,000 helped build the first permanent home for the Saint John public library.

From Market Square, we walked through Saint John skywalks to its City Market. 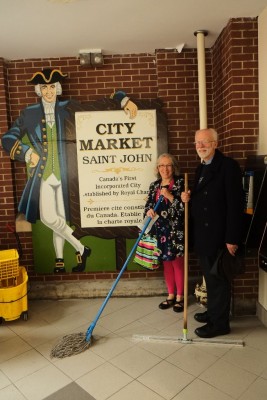 Naturally, since Saint John is a port city, we saw products from far and wide.

Ray and I had a very English lunch of fish and chips, before we took a city bus to Reversing Falls, where the Saint John River flows into the Bay of Fundy. Evidently we missed the most sensational moment when the tide comes in and the water churns dramatically, but we enjoyed watching, waiting, and visiting with the other tourists.

As we rode the bus back into town, a lady named Louanna began visiting with us. When Garth asked about a steeple we had seen towering over the town, she told us that it was across from her apartment building and that she would show it to us. When we came to her stop, she called the bus driver by his first name. When he questioned whether we cruise ship tourists should get off yet, she explained to “Danny” why we were getting off.

Louanna told us that Queen Elizabeth had once visited her apartment house (which was then a grand hotel), while on a royal visit to Canada. Soon she was unlocking the security door to the building to take us into the lobby to see a display about the Queen’s visit.

Our hostess told us that her mother took her older brother to see the Queen. As they stood in the crowd watching the royals, Queen Elizabeth’s husband Prince Philip noticed that her brother’s hat had fallen to the ground. In her apartment, Louanna has a local newspaper article from the time which reported on the kind and attentive Prince stopping to tell our hostess’ mother that her son’s hat had fallen off.

When we finished in the lobby, our bus mate took us next door to an historic theater and then across the street to see the church, before we said goodbye to this native of New Brunswick, who reached out in hospitality to four traveling Americans.

Before we sailed away from Saint John, this bagpiper stood on shore to say farewell to our ship. 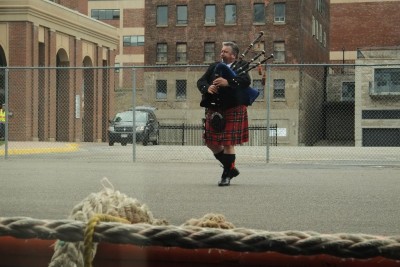 Be hospitable to one another without complaint.
1 Peter 4:9