As we continued “On the Traces of Pierre Boucher,” we visited the city of Trois-Rivières, also along the St. Lawrence River. The stop at Trois-Rivières was the main reason I wanted to go on the four-day bus tour after the Boucherville 350 festival; it was in Trois-Rivières that Pierre Boucher became a leader in New France. It was for his service there that he was ennobled and was therefore able to found Boucherville.

Our volunteer Trois-Rivières tour guide praised Pierre profusely. He took us to Pierre Boucher Plaza, which stands on top of the cliff where the town was first established. Nearby the plaza are this sign, all in French . . . 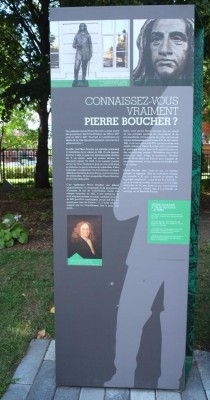 . . . and this monument in French and in English.

Born in France, Pierre Boucher, later Sieur de Grosbois, came to Canada about 1635. He spent time in Huronia and at Quebec before becoming successively, interpreter (1644), commander (1651), and governor (1654) at Trois-Rivières. A royal judge and king’s councillor, he represented the colony in France in 1661-1662. His Histoire veritable et naturelle . . . de la Nouvelle France, written on his return, had a profound influence on the colony, and is still a valuable historical source. One of the dominant figures of New France, he founded Bouchervile in 1668 and was its seigneur until his death.

Pierre Boucher’s home was across the street from where the monument stands now. Pierre trained the local militia behind his home. Our guide said that Samuel de Champlain founded New France, but that Pierre Boucher saved it. He spoke of Pierre’s courage and said that if not for what Pierre did at Trois-Rivières, Quebec City would have fallen, too.

The steps below lead up the cliff to Pierre Boucher Plaza. Carved into the steps’ risers is a timeline of the history of Trois-Rivières. Step 14 tells that Pierre Boucher became the town’s governor.

The life of Pierre Boucher teaches us about the impact that can come from an unconventional education. Pierre was educated by the Jesuits because his father served them as a carpenter. Later Pierre went with the Jesuits to work among the Huron native people at Huronia. Because of Pierre’s extensive understanding and respect for native peoples, he was able to diffuse a dangerous situation at Trois-Rivières.

On August 23, 1653, an army of 600 Iroquois surrounded Trois-Rivières. Inside the fort were about 40 men, mostly teenagers and the elderly, who fought bravely under Pierre Boucher’s leadership. After trying to take the fort for nine days, the Iroquois called for peace negotiations. Pierre went outside the fort alone to meet with the Iroquois. He didn’t want his “soldiers” to face a surprise attack and he didn’t want the Iroquois to see what a small army he had.

At the end of the negotiations, Pierre had convinced the Iroquois to release to him all the prisoners they had with them and to go back to bring any other prisoners within 40 days. He also told the Iroquois to go to Quebec City and take presents to the governor of New France.

I have to confess that I feel uncomfortable about having an ancestor who fought against native people who were, after all, here before the French came to North America. However, I do know that the French were co-existing peacefully with other tribes at that same time, that native people and the French were both benefiting from the trade going on between them, and that the Iroquois were a warring people who were fighting not only with the French but also with other First Nations people.

An unconventional education prepared Pierre Boucher to do what he believed he must do. When the time was right, he was able to take what he had learned and use it in a powerful way.

As you homeschool, you are preparing your children for the future when it will be their turn to do what they believe they must do. Like Queen Esther, they may be at the right place at the right time to do the right thing.

Then Mordecai told them to reply to Esther,
“Do not imagine that you in the king’s palace
can escape any more than all the Jews.
For if you remain silent at this time,
relief and deliverance will arise for the Jews from another place
and you and your father’s house will perish.
And who knows whether you have not attained royalty
for such a time as this?”
Esther 4:13-14