Our family loves to visit factory museums and visitor centers and to go on factory tours. They make great field trips; most of the ones we have visited have been free. Among those we have enjoyed are the Hershey’s Chocolate Tour in Hershey, Pennsylvania; . . . 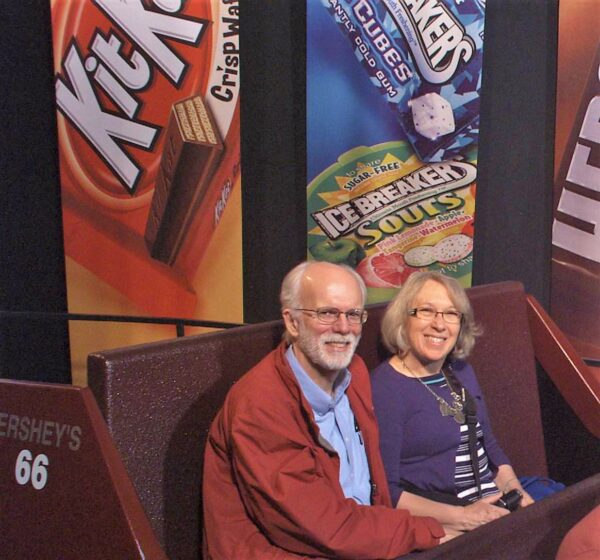 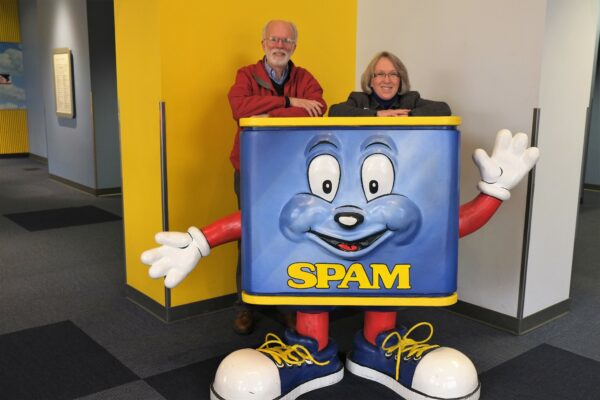 and Mayfield Dairy in Athens, Tennessee. 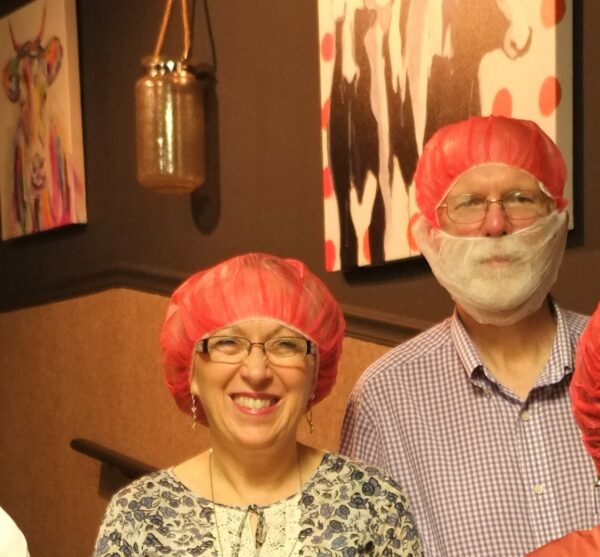 As you can see, at Mayfield Dairy you actually get to watch milk and ice cream go into containers—thus the mandatory hair nets and beard nets.

During our recent trip to the Smoky Mountains, we visited the BUSH’s® Beans visitor center in tiny, unincorporated Chestnut Hill, Tennessee. 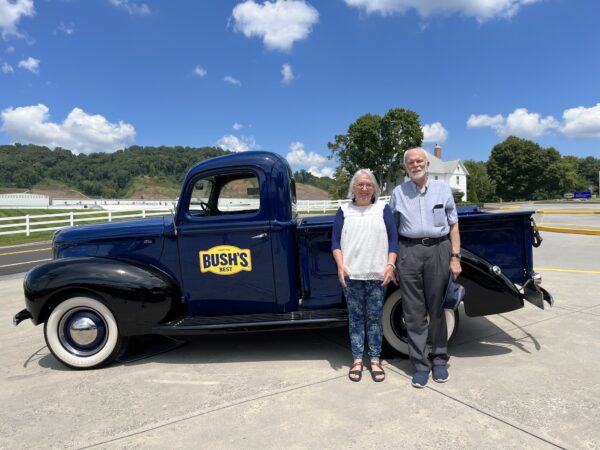 Of course, we stopped for photo ops before we went inside. 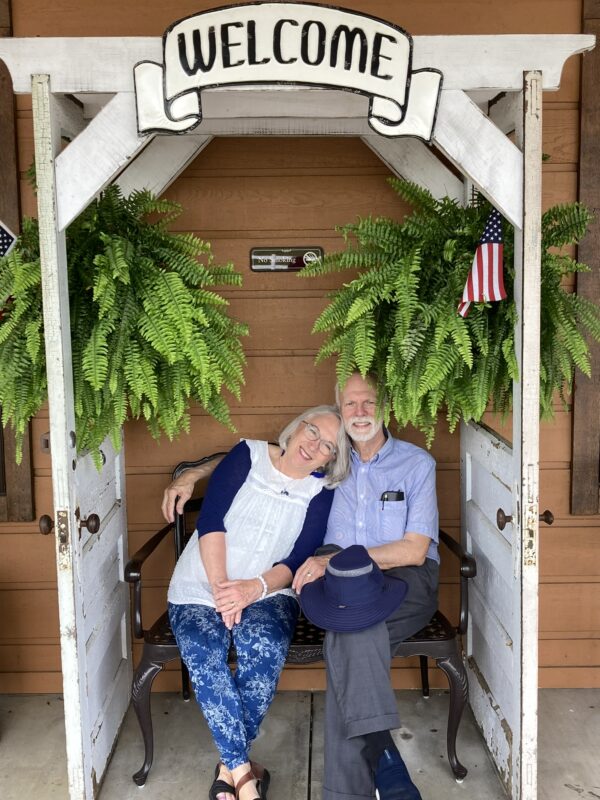 It has been so long since we have watched broadcast television that we weren’t familiar with BUSH’s popular television commercials, featuring Jay (the man below) or Duke (the dog), but we rarely pass up an opportunity to stick our heads into one of those photo op thingies. 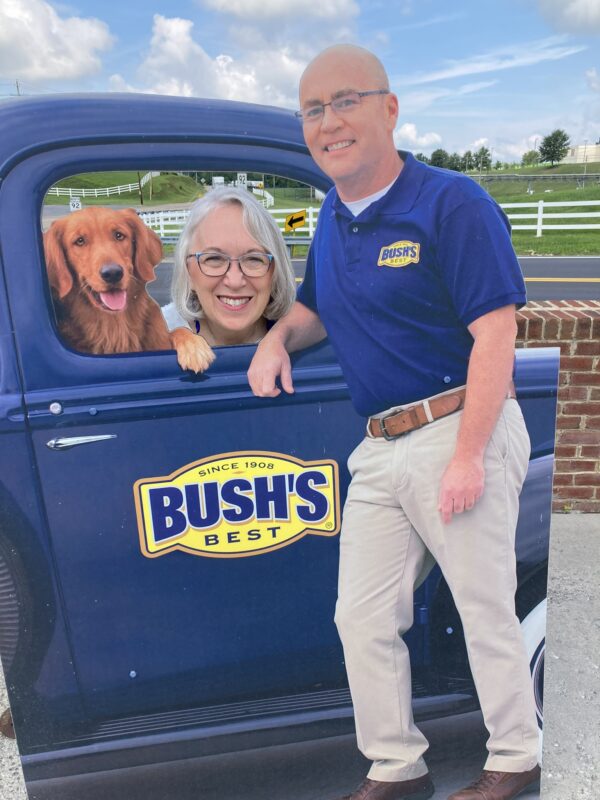 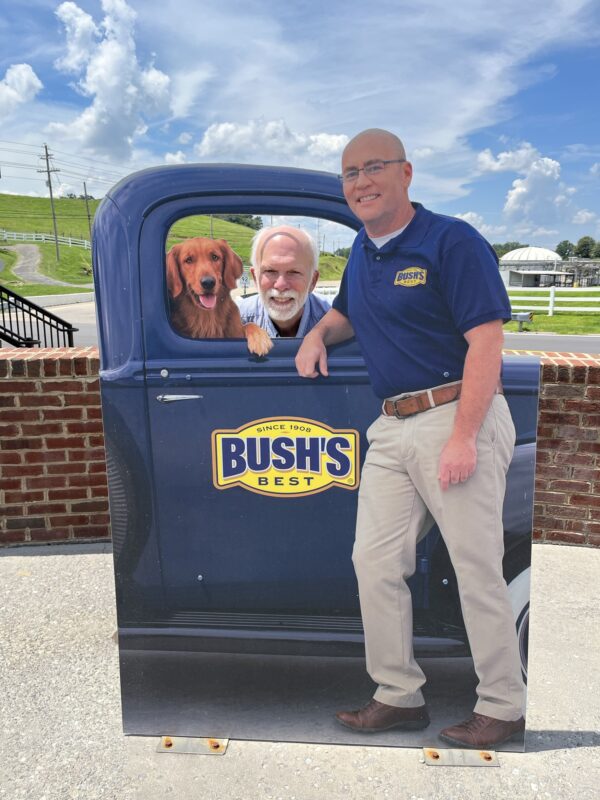 Inside we learned that Duke the dog is the only one who knows the secret recipe of BUSH’s baked beans.

We had lunch at BUSH’s Family Café. No chips and salsa or fresh bread while you wait for your meal here. Instead we enjoyed samples of the BUSH’s baked beans variety of the day. I enjoyed the daily special of cowboy nachos. One of the toppings was baked beans, of course. For dessert, we and our friends shared one slice of pecan pie. It was tasty, and we came home with a free recipe which includes—you guessed it—3/4 cup of BUSH’s Pinto Beans!

Ray and I were inspired by the stories of this family business that is more than a century old. In 1908 A. J. Bush realized that his sons would someday be forced to leave the area to find employment. He decided to found a canning operation along with his sons, Fred and Claude. A. J. named the company BUSH Brothers in honor of his boys (the official company name continues to be BUSH Brothers and Company).

Economic and political conditions have forced BUSH’s to reinvent itself several times. In their early years, they canned tomatoes for the nearby Stokley’s® factory. When Stokley’s left the area, Mr. Bush bought their equipment.

When the Tennessee Valley Authority (TVA) built dams in the area, thereby flooding area farmland, the company had to purchase vegetables from other parts of the country.

Wanting to be able to can vegetables year-round, in 1952 BUSH’s began to create products from dried beans which can be canned all year-round. In 1953 they introduced Showboat® Pork ‘n Beans. I was impressed to learn that they purchase all of their dried beans from the United States and Canada.

In 1969 a member of the family came up with the idea of using an old family recipe to can baked beans. That’s the secret recipe that was known only to Duke the dog, according to the popular Sam and Duke commercials.

I can certainly see why A. J. Bush wanted to live in Chestnut Hill. The setting is beautiful though it was surprising to come upon this huge operation by the side of a curvy country road. BUSH’s once had eight factories around the country, but today the company manufactures all of their products in this plant in Chestnut Hill and in another plant in Wisconsin. When we mentioned our visit to Clayton, our newest Notgrass History team member, his face lit up in recognition. I asked if he had been to the visitors center. No, he hadn’t been there, he told us, but he remembered those country roads well from his former employment as a truck driver who sometimes drove on them in an 18-wheeler when he made deliveries there. 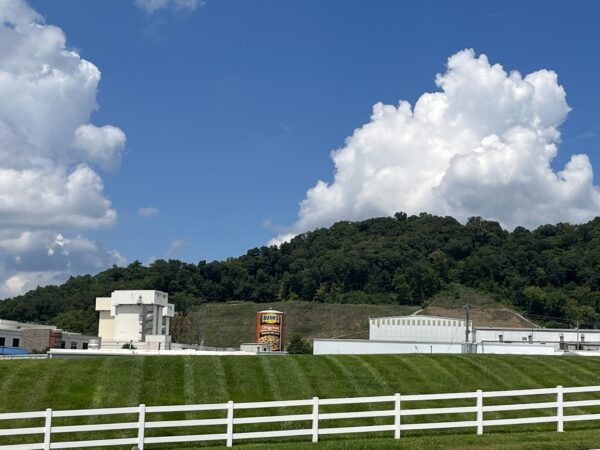 In this next view of the plant, you can imagine the scents of canned vegetables that once wafted into the windows of Mr. and Mrs. A. J. Bush’s home (at far right) and into their children’s bedrooms. One of A. J.’s descendants mentioned those smells in one of the videos in the museum. 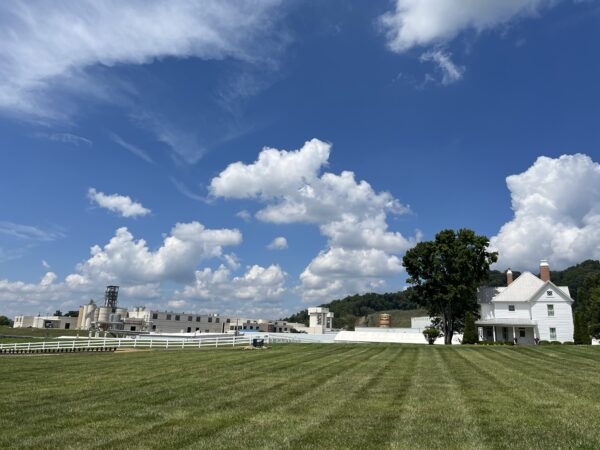 I heard two touching stories in the museum. One day, when A. J.’s employees came to him for their paychecks, he paid them and told them that he was out of money. He told them that if they would keep working without pay, he would make sure they would get paid when the money came in. Every employee stuck with A. J. and when the money came in, they got paid.

When A. J. was running his general store, he kept a box of cash there. He told his employees that if any child came in without adequate shoes to go to school, they were to provide the shoes with money from that box of cash.

A. J. made sure that those children had what they needed to get an education. Thank you for doing what you need to do to make sure that your children get one.

He who oppresses the poor taunts his Maker,
But he who is gracious to the needy honors Him.
Proverbs 14:31