On Saturday morning several members of our family went to a park to walk and play. Squirrels and a chipmunk played in the wooded area between the walkway and the river’s edge. In the water near the bank, I spotted two dark shapes. As I got closer, I could see that one shape was driftwood and the other was two Canada geese. 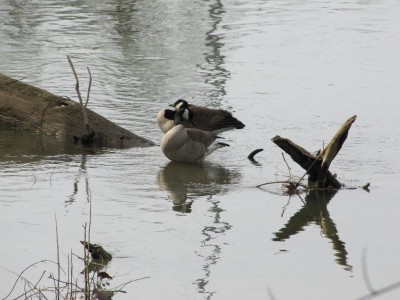 The two birds enjoying that almost-spring day stuck close together the whole time I watched them. They were probably mates. 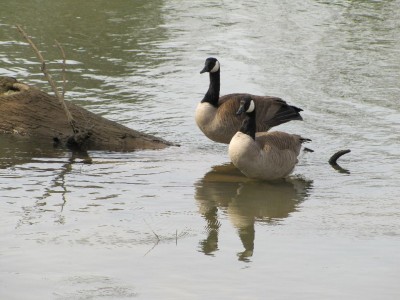 Later Saturday night I enjoyed reading about Canada geese. I was surprised to learn that they were once so popular with hunters that they came close to extinction in the 1940s. The U.S. Fish and Wildlife Service and other government agencies then began working to protect them. The most common subspecies is the giant Canada goose, now seen so often in both urban and rural areas around the United States. This subspecies was considered extinct until a biologist discovered some in 1965.

The Canada goose mates for life. The female selects nesting sites. She also constructs the nest using plants, such as dry grass, lichens, and moss. After she lays her first egg, she also adds down and other feathers. The female is responsible for incubating the eggs, while her husband carefully guards his mate and the eggs. After the eggs hatch, the goslings stick close to their mother and father.

Not all Canada geese migrate, but those that do often travel in family groups. When they form their distinctive V-shape, experienced geese take turns as leader.

After a while, the twosome that I was watching began swimming upriver in our direction. 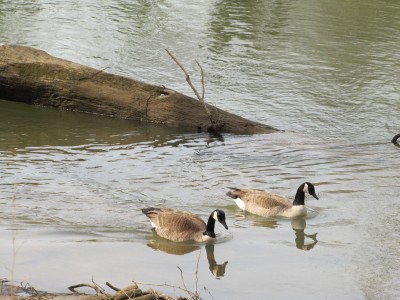 Homeschoolers and Canada geese are birds of a feather. For one thing, both Canada geese and homeschoolers know how to travel upstream! For another, both were once common, later became”rare birds,” and today their numbers are increasing rapidly.

According to the Great Plains Nature Center in Wichita, Kansas, the number of Canada geese wintering in Wichita was 1,600 in 1983 and more than 21,000 in 2007. I don’t think homeschooling is growing that fast, but it certainly is growing!

My pair of Canada geese on Saturday kept on swimming upstream. 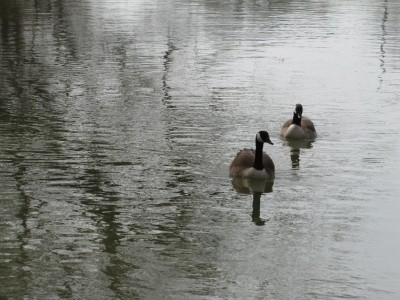 Stick to your mate for life. Build your nest carefully while your husband protects it. Keep your goslings close to both their father and their mother. Be strong and courageous as you swim upstream.

Praise the Lord from the earth . . .
Beasts and all cattle;
Creeping things and winged fowl;
Kings of the earth and all peoples;
Princes and all judges of the earth;
Both young men and virgins;
Old men and children.
Let them praise the name of the Lord,
For His name alone is exalted;
His glory is above earth and heaven.
Psalm 148:7, 10-13