Last Saturday night Mother, Ray, and I went to Granville with Mike, our bathroom remodeler extraordinaire, and his wife Jenny. (Our two-week bathroom project has morphed into four. It is fun having Mike and Jenny here and we’re going to miss them when it’s finished).

Granville is a tiny village a few miles away from our little town of Gainesboro. Both places are on the banks the Cumberland River. They were once thriving riverboat towns, sending steamboats along their way all the way to the Mississippi. Not long after we moved to town, John, Bethany, and Mary Evelyn became close friends with Jack, an elderly man whose father had been a captain on one of those boats–Captain Bob they called him.

When first the railroad and then Interstate 40 bypassed Gainesboro and Granville and when the Tennessee Valley Authority flooded the countryside around Granville to build a lake, both towns declined to a shadow of what they used to be.

Gainesboro, with a population of just under 1,000, is on the National Register of Historic Places and has a rich history which includes the Civil War and the War of 1812. It is currently experiencing an exciting revitalization.

Though Granville is much smaller, its revitalization began several years ago when a couple from out of town purchased its 1880-vintage Sutton General Store and began to restore it. When the couple experienced poor health, they gave the store to the city of Granville with the stipulation that it always be a venue for bluegrass music.

Granville has kept up its end of the bargain. Each Saturday night Sutton General Store is the home of the Sutton Ole Time Music Hour. 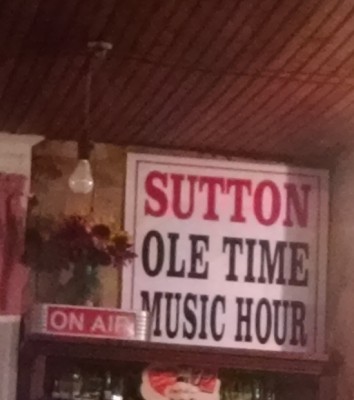 The evening begins with a delicious dinner at 5, followed by a practice session for the evening’s bluegrass band. The show is at 7. Each Saturday evening the show is recorded for re-broadcast on several radio stations and on Internet stations.  Fans from England and  France who have heard the show online have traveled to Granville to experience the Music Hour.

Before the show began last Saturday night, the announcer had us all practice applauding on cue so that we would sound good on the broadcast. He said we did a good job. I think he liked the show as much as we did. 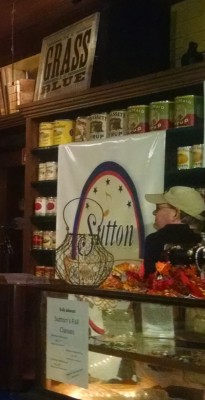 We enjoyed introducing Mike and Jenny to the Tennessee culture I knew as a child. It was very different from what they knew in Minnesota.

I was too cool to admit to liking my Daddy’s country music when I was a teenager, but now that I don’t have to be cool, I love how it takes me back to my childhood. I know that country and bluegrass can have some pretty awful lyrics sometimes, but the music on Saturday night was so wholesome that I could sing all those songs to my grandchildren. The gospel songs included in the program were beautiful, especially the one that talked about how wonderful it would be if everyone could experience a nightly habit of Daddy reading from the family Bible.

Though this was our first time to attend the Sutton Ole Time Music Hour, Ray and I have attended special events at Granville many times. In fact, Mary Evelyn, Clara, Wesley, and I enjoyed a crisp and bright Saturday there earlier this month when they had their fall festival.

Last Saturday we got to Granville in time to stroll down one of its four short streets, stopping at the antique store and the gift shop. We got to the general store in plenty of time for dinner. Someone rang the dinner bell at 5 and we guests walked into the dining room and sat down at our assigned tables where we were served family style. Before the meal began, our host for the evening welcomed us all and told us the history of the store and the music hour.

He ended with, “Prayer is illegal in Tennessee schools but we can pray here” and then asked the dinner guests who would like to ask the blessing. A man at the table next to us volunteered.

Now He was telling them a parable
to show that at all times
they ought to pray and not to lose heart.
Luke 18:1