Perhaps the most popular of Aesop’s fables is the tortoise and the hare, from which we learn the adage, “Slow and steady wins the race.” As the tortoise walked slowly, purposefully, and steadily toward the finish line, he moved closer to his goal of completing the race he had begun.

Atlanta Constitution columnist Frank Lebby Stanton (1857-1927), wrote the poem,”Keep A-Goin’!” On Wikipedia I found this version from Frank Lebby Stanton: Georgia’s First Poet Laureate, published by the Georgia Department of Education in 1938. Stanton was well-known in his own day, and an Atlanta elementary school is named for him. I found one mention of him at the Library of Congress (just a list of Georgia’s poet laureates), but was unable to find out much more about him online. That’s sad, because I think this poem is profound. 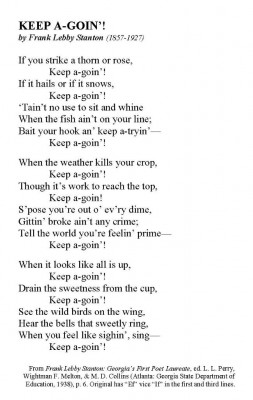 I think the tortoise would agree: “Keep a-Goin’!” By this time of the homeschool year, you may need a little reminder from the tortoise or from Mr. Stanton to keep a-goin’! When you do keep a-goin, you are being a good example for your children. Perseverance and endurance are traits they will need for all of their lives. Every time you help a child keep folding laundry until the last sock is folded or keep washing dishes until the last dish is in the drainer or keep working on a math lesson until the last problem is finished, you are training your child to persevere. 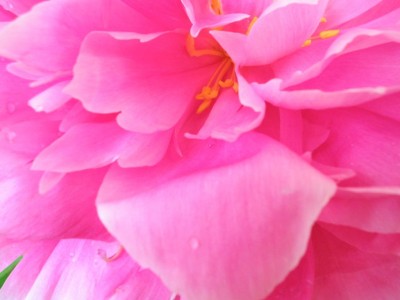 Let us run with endurance the race that is set before us,
fixing our eyes on Jesus, the author and perfecter of faith,
who for the joy set before Him endured the cross, despising the shame,
and has sat down at the right hand of the throne of God.
Hebrews 12:1-2, NASB