Act II opens with George Müller at his desk in the new Orphan House. A Bristol seamstress visits him to see how she might find a home for the street robber Charlie, whom the constable is constantly chasing about town. George gives her an application. To her great surprise, she learns that the Orphan House has no fees but is completely free. 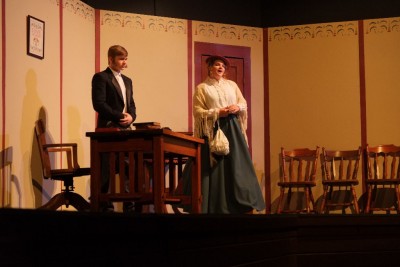 When George sits back down at his desk, two of the Orphan House workers enter. 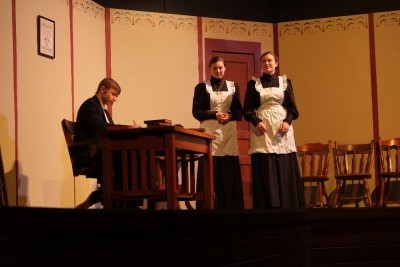 Jenny says that it is almost time for breakfast.

“The children know to come to the table when they hear the bell,” George replies.

Jenny hesitates as she says, “But there isn’t anything for them to eat.”

George says, “God will provide,” as he continues his work.

Hattie and Jenny look at each other in bewilderment before Jenny says, “But, sir, there is no food in the house.” Hattie adds, “And there is no money to buy food.”

Then, he kneels in prayer, asking for a nourishing breakfast for the children and that God will nourish their souls as well.

Following his prayer, he sings the theme song of the play. The lyrics are words found in George Müller’s diary:

I believe God answers prayer,
Answers always, everywhere;
I may cast my anxious care,
Burdens I could never bear,
On the God who answers prayer.
Never need my soul despair
Since He bids me boldly dare
To the secret place repair,
There to prove He answers prayer.

The dinner bell rings and George exits his office with the words, “Time to eat!” Again bewildered, Hattie and Jenny follow him.

The children enter the dining hall (which was based on the actual Orphan House dining hall), singing “O How Kindly Hast Thou Led Me,” before stopping at their seats to say their blessing, “We thank Thee, Lord, for these tokens of Thy love.” 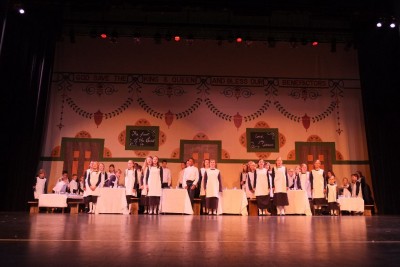 George and his wife Mary stand at the front of the dining hall, conversing happily. 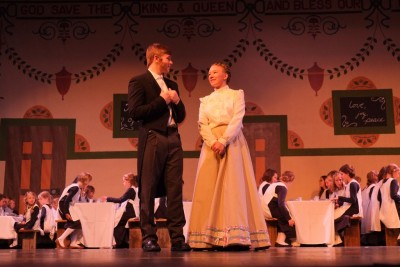 “Oh, you just wait and see what God has for you today,” she says cheerily. 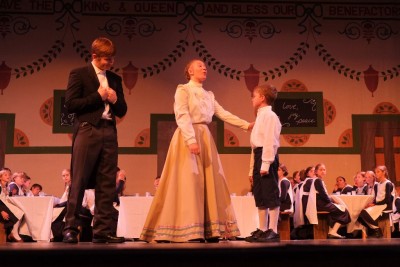 Soon Hattie and Jenny enter with a local baker, who tells Mr. Müller that God woke him up and told him to go to his bakery and make bread for the orphans. When Hattie says, “Can you believe it?” George replies, “Of course, I can believe it! I had no cause to be anxious because I believe in God.”

The curtain closes as Hattie, Jenny, and another worker distribute bread to the orphans. 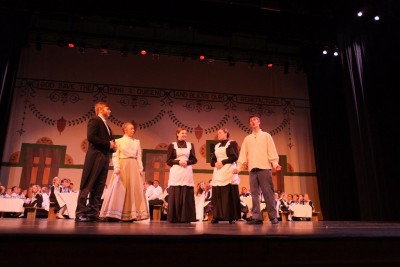 As a milkman crosses the “street” outside the Orphan House, his milk cart breaks down. 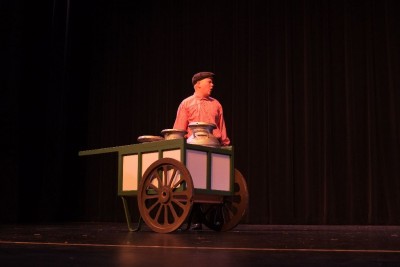 As he fumes, complains (“Of all times!!”), and kicks the cart, Mr. Müller’s co-worker Henry Craik comes along and offers to help him. As they leave to get tools from behind the Orphan House, the milkman realizes that his milk will either be stolen or spoil, so he asks if the orphans could use it! 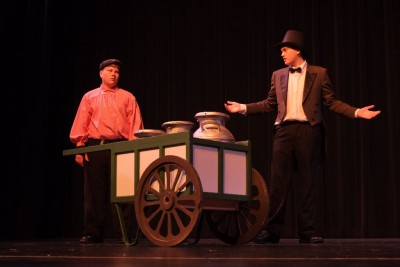 Henry thanks him and then lifts his hands heavenward and says, “And thank You!” 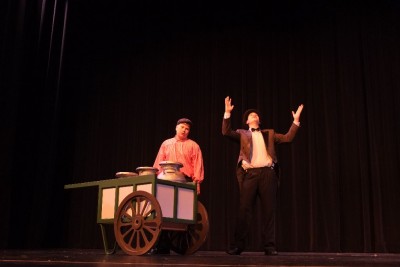 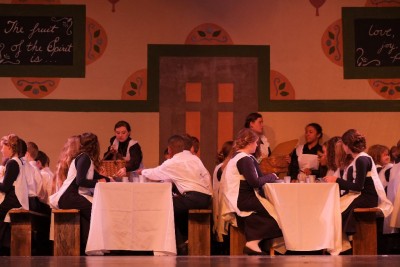 . . . when Mr. Craik and the milkman enter with cans of milk for their breakfast. 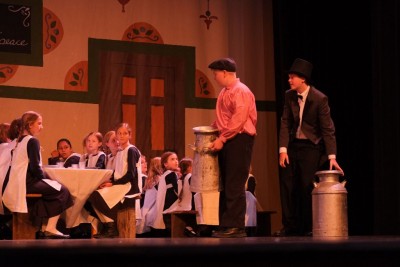 Later that morning, Müller’s wife and staff gather in his office where they discuss the one pence that is in the Orphan House coffers. 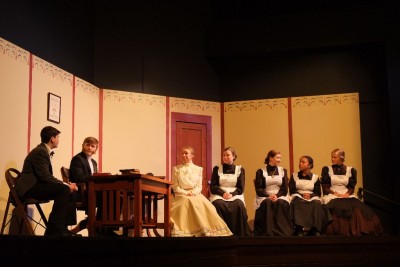 While they pray, Hattie answers a knock on the door and then lays an envelope on the desk. 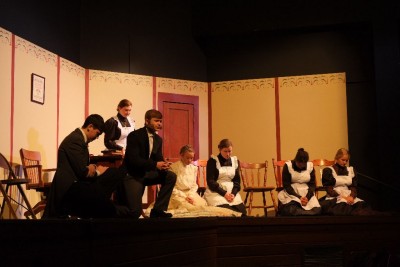 Then, George and Mary discover the envelope handed to Hattie through the door during the prayer. It contains ten pounds! 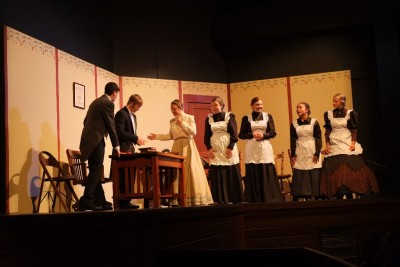 After the staff leaves, the seamstress enters to enroll Charlie in the Orphan House. The only way she could get Charlie there was by the help of the constable. 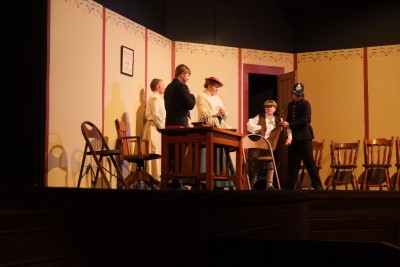 Charlie announces emphatically that he doesn’t want to be there. 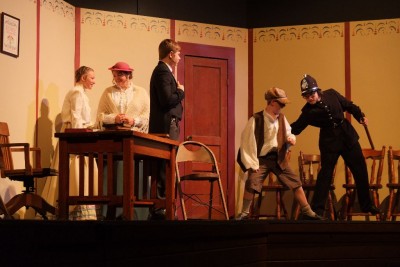 Soon staff member Mr. Andrews enters with Arthur, another new boy who does not want to be there. 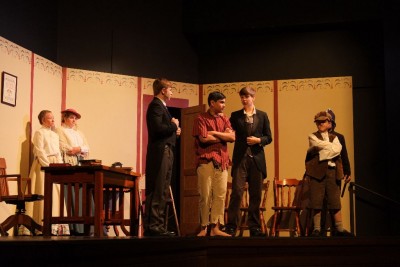 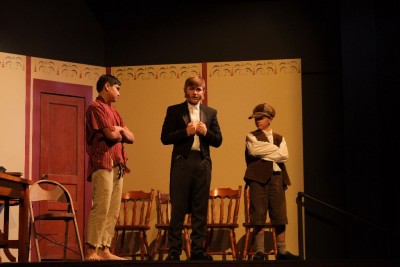 This is the same kind of choice that God told Moses to give to the Israelites just before they entered the Promised Land:

“I call heaven and earth to witness against you today,
that I have set before you life and death,
the blessing and the curse.
So choose life in order that you may live,
you and your descendants,
by loving the Lord your God,
by obeying His voice, and by holding fast to Him;
for this is your life and the length of your days,
that you may live in the land
which the Lord swore to your fathers,
to Abraham, Isaac, and Jacob, to give them.”
Deuteronomy 30:19-20

Story and photos from Street Robber: The Story of George Müller and His Orphans by Mary Evelyn McCurdy, performed by the Homeschool Dramatic Society at the Cookeville Performing Arts Center, Cookeville, Tennessee, September 15-17.