When Charles Francis Adams was 28 years old, he wrote this in his diary: “I have the misfortune of being the descendant of two great men and must do something to avoid the charge of utter degeneracy.”

Charles Francis Adams served in the legislature of his home state of Massachusetts before becoming owner and editor of the Boston Daily Whig. He was serving as a member of the U.S. House of Representatives as the country headed toward the Civil War.

Both his father John Adams and grandfather John Quincy Adams had served their country as U.S. ambassadors to the Court of St. James in England. Charles Francis became the third generation in the Adams family to serve in this position when President Abraham Lincoln asked him to go to England to persuade the British not to give aid to the Confederacy. Charles Frances served the Union well and was able to persuade the British, even though their mills desperately wanted cotton from the southern states who had seceded.

Charles Francis Adams built this stone library beside the family home of Peace field. The 3,000 books collected by his grandfather John Adams had been given to the Boston Public Library. In this stone library are the 8,000 volumes of books collected by Charles Francis’ father John Quincy
Adams. It includes a card catalog handwritten by John Quincy Adams himself. Adams, who read many languages, including Latin, Greek, Hebrew, Russian, and Spanish, wrote each card in the language in which the book was written. 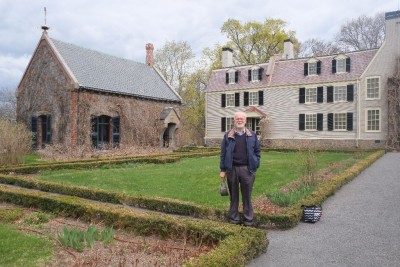 In this library Charles Frances did our country a great service by organizing his family’s papers. He published three books based on them. The Adams family papers now reside with the Massachusetts Historical Society. They include correspondence, records, and writings from John and Abigail, John Quincy, Charles Francis Adams, and their extended families. Included are items from 1639 to 1889.

The Adams library is set in an English garden. I was excited to see this rose tree Abigail Adams brought home from England and planted at Peace Field. 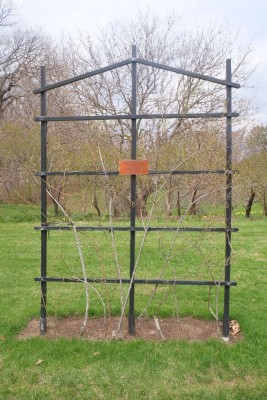 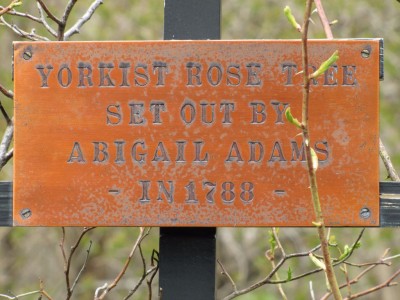 Charles Francis Adams took his connections to his prominent father and grandfather seriously. Jesus invites us all to be connected in the most important way possible. He offers us a connection to Himself.

I am the vine, you are the branches;
he who abides in Me and I in him,
he bears much fruit,
for apart from Me you can do nothing.
John 15:5