Our daughter and her family and Ray and I enjoyed our visit to the West Virginia state capitol on our way home from our recent trip to Pittsburgh. The capitol sits beside the Kanawha River. Its ornate gilded dome is one of the most beautiful capitol domes we have seen. It stands four feet higher than the U.S. Capitol. We arrived about 8:00 a.m. This was our early morning view. 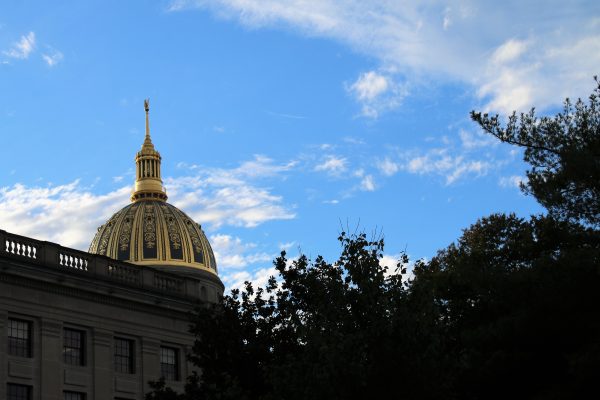 We have deer, bald eagles, and herons near our home, but surprisingly, we rarely see a squirrel. We were excited to see this black one on the capitol grounds. 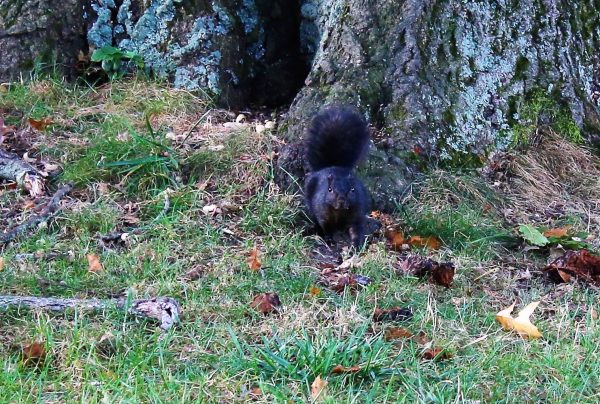 He later climbed up a tree and hung out near his distant cousin. Can you find them? 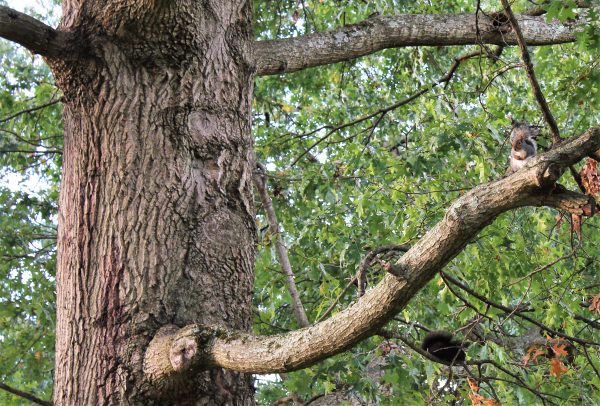 I don’t know a great deal about West Virginia history, but let me introduce you to the state’s first governor, Arthur Ingram Boreman. He became governor in 1863 after West Virginia seceded from Virginia during the Civil War. 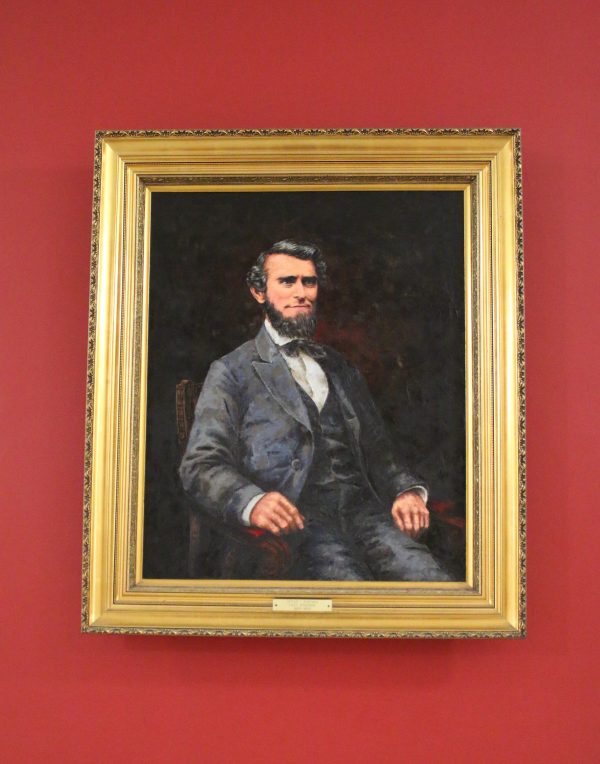 This plaque gives the story of the state’s founding. 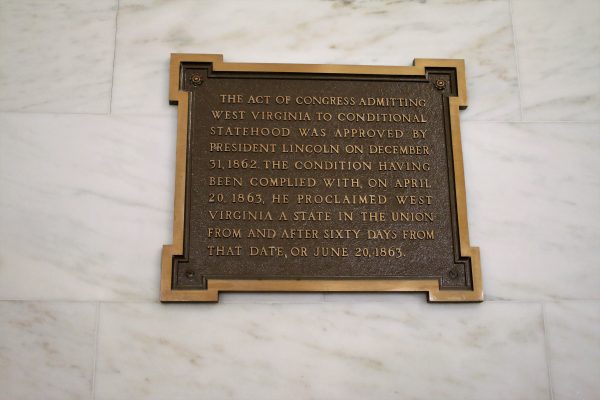 This unusual statue of Abraham Lincoln stands in front of the capitol and looks out over the river. 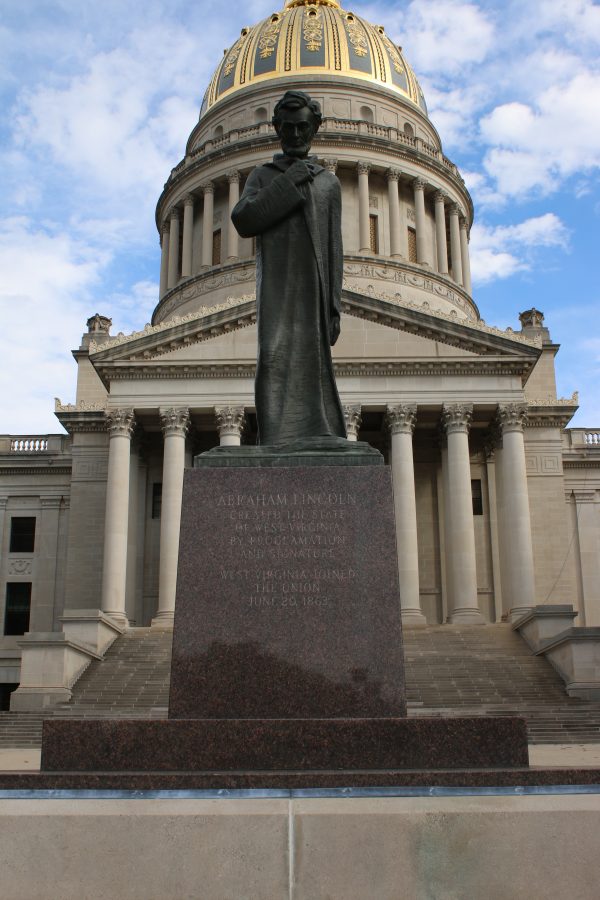 The interior of the capitol is as beautiful as the exterior. It is decorated with literally tons of marble, including some from Tennessee. 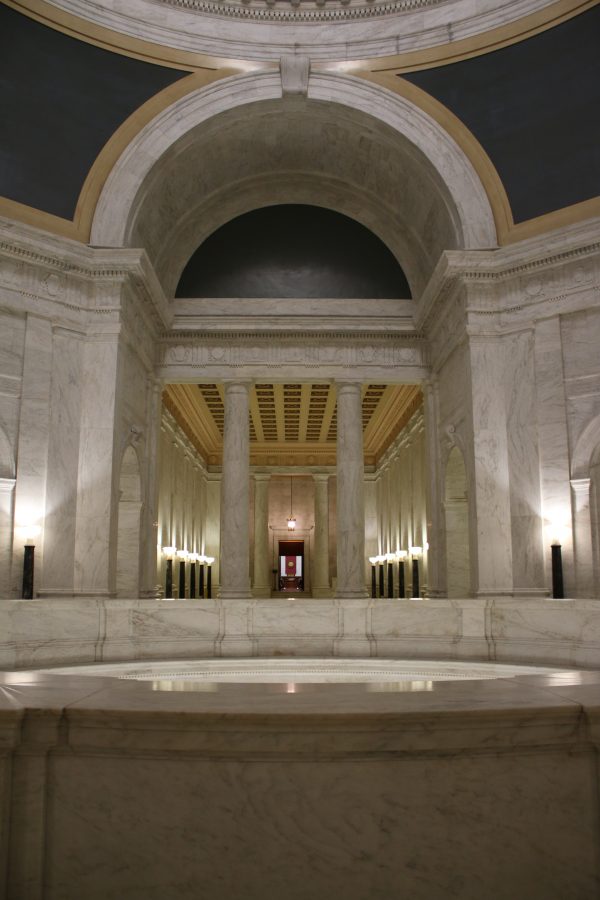 I was particularly impressed with the majestic column lamps that decorate many places in the building, including this foyer. Italian alabaster bowls sit above pedestals made of black and gold Belgian marble. 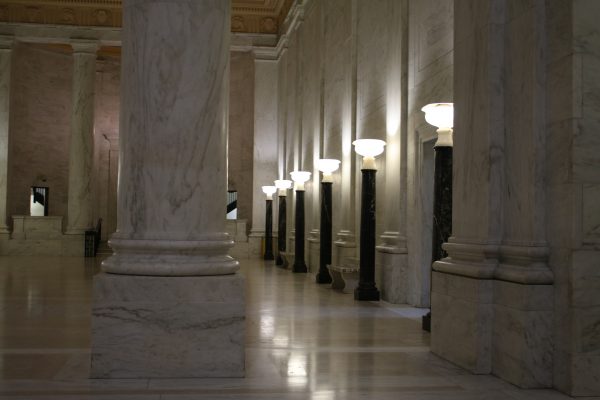 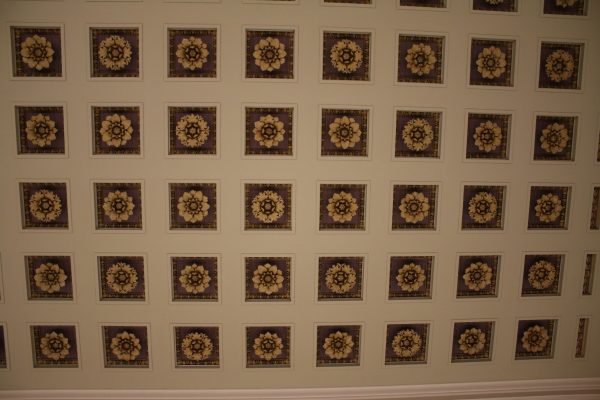 The state legislature had finished its session the week before we visited, . . . 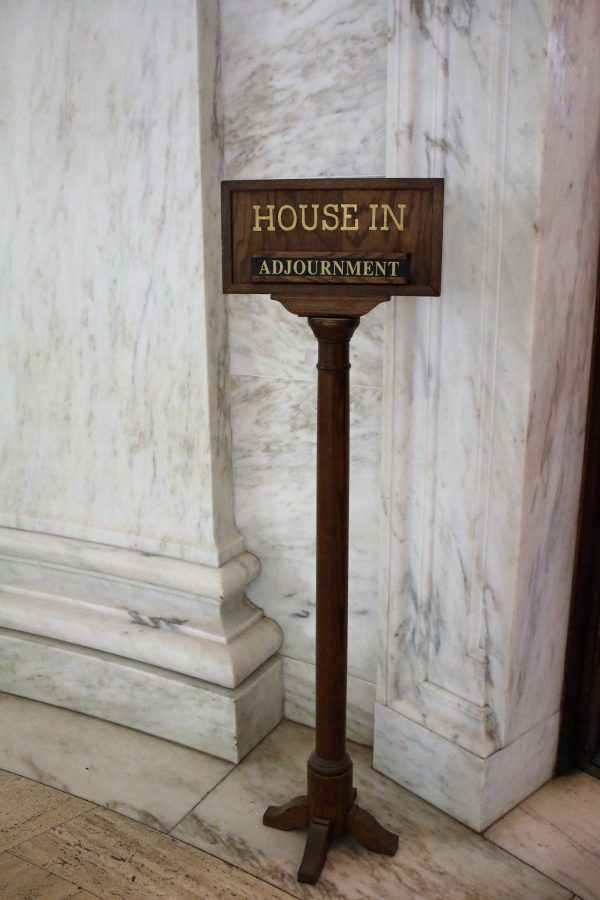 . . . so we were able to go inside the chamber of the West Virginia House of Delegates . . . 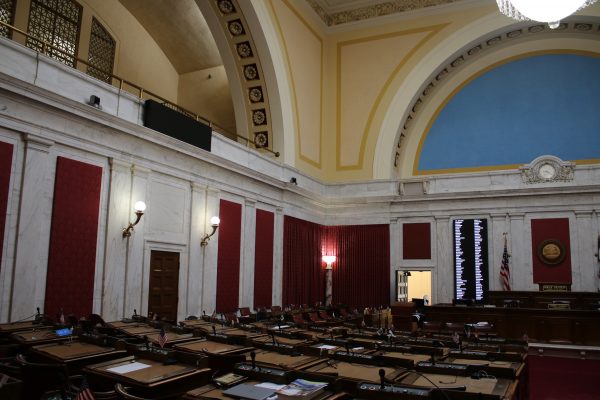 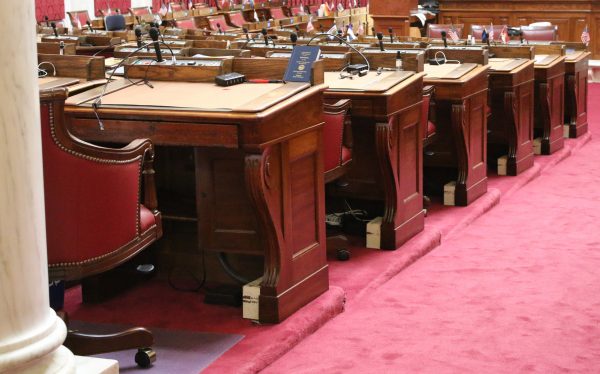 The West Virginia senate chamber has virtual seals that are projected on either side of the senate president’s stand. 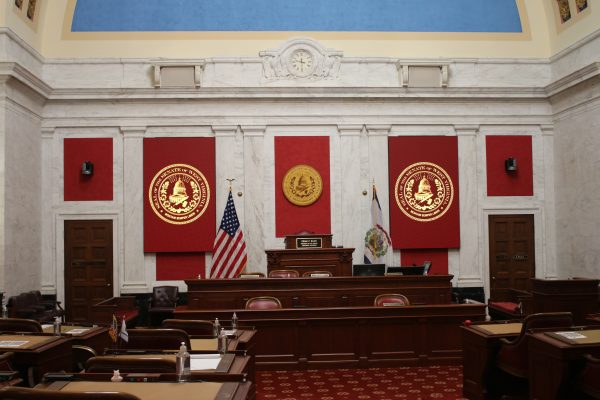 If you look closely, you can see that the virtual seals rotated. 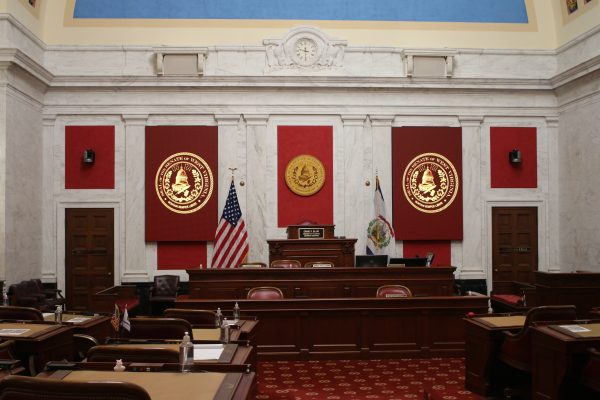 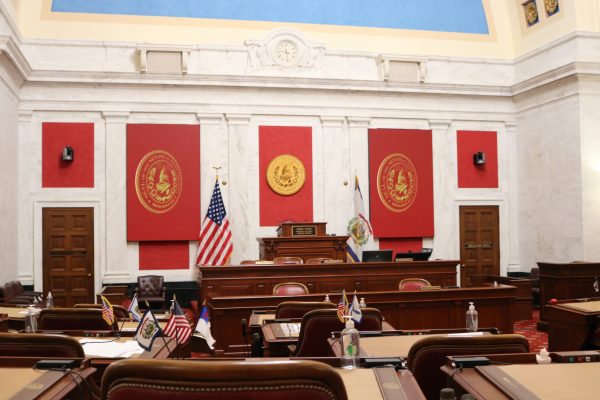 A dome topped the senate chamber. 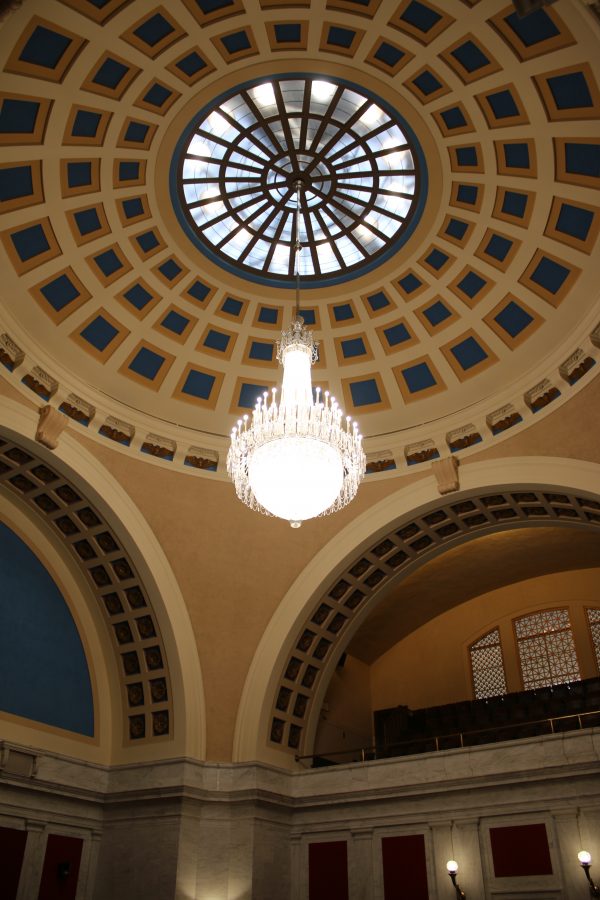 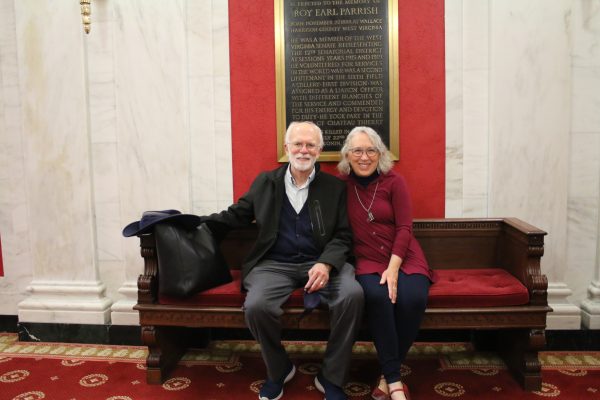 Ray and I waited in the Grand Foyer outside the senate chamber while our daughter and her family went to another part of the building. While there, we met Lee Cassis, who serves as the senate clerk. While we were visiting with him, I noticed a couple looking around inside the senate chamber. When they came out, we realized with great astonishment that they were good friends of ours from home! Our daughter was then in a nearby staircase and could hear the sound of my excited voice in the large echoing Grand Foyer. Then she joined in our excitement at seeing each other. Our son-in-law and grandchildren soon returned. Mr. Cassis invited us all to go past the visitors’ rope in the senate chamber. He took photos of our whole group standing behind the president’s podium. What a grand surprise! 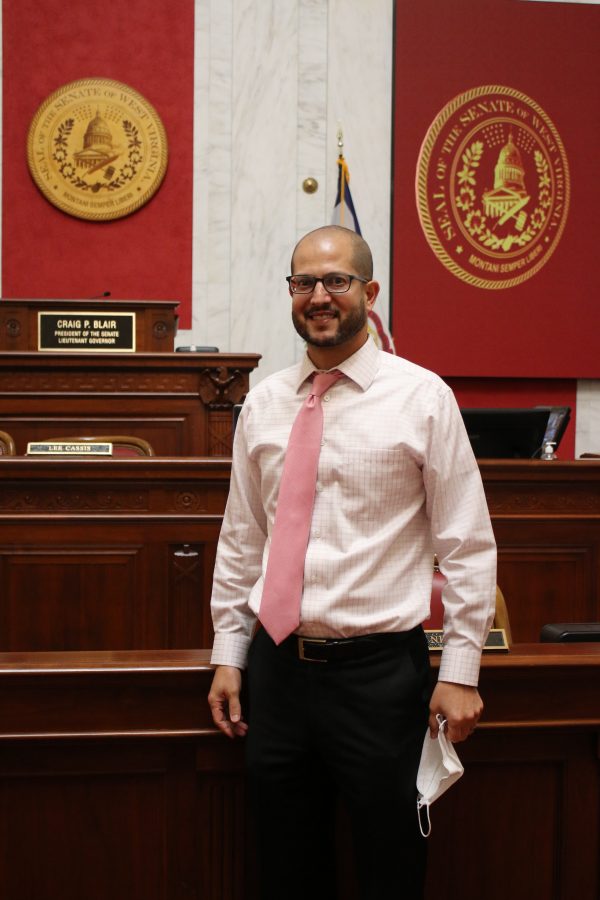 We said goodbye to our friends. Then Ray and I enjoyed getting to see inside Mr. Cassis’ office. 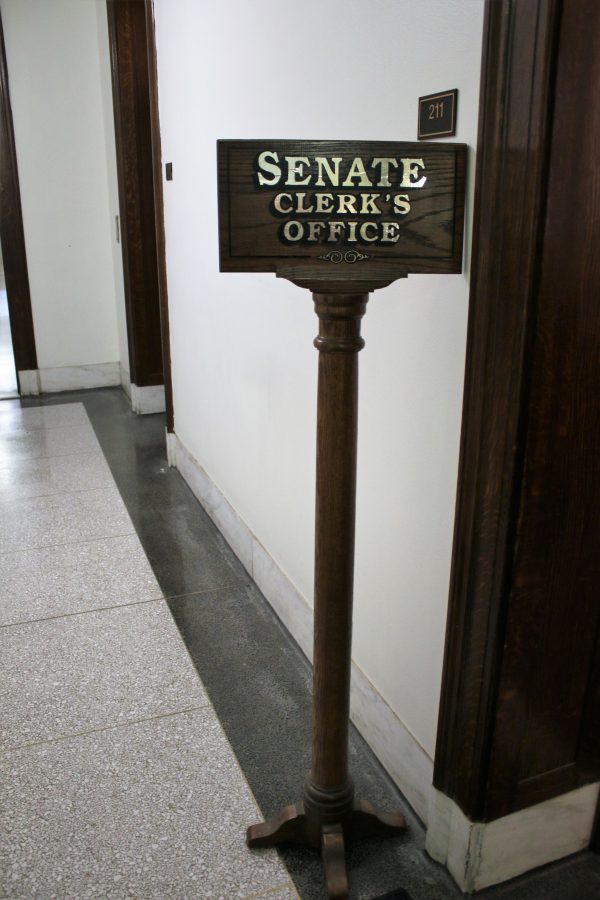 He told us that he has his dream job. 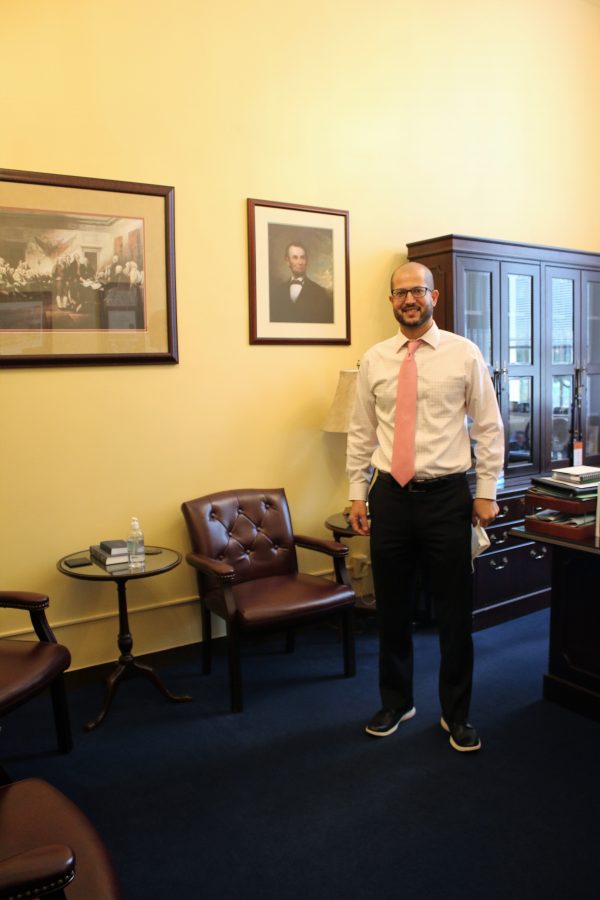 You have my dream job—homeschooling your beloved children day after day.

Whatever you do, do your work heartily,
as for the Lord and not for people,
knowing that it is from the Lord that you will receive
the reward of the inheritance.
It is the Lord Christ whom you serve.
Colossians 3:23 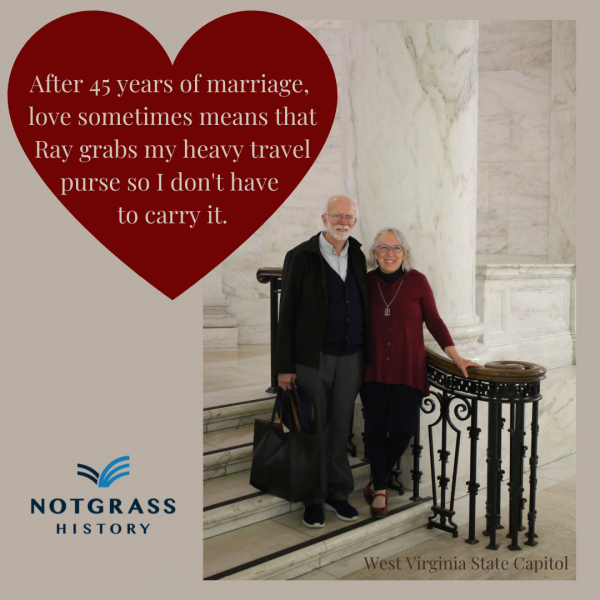