America the Beautiful has five types of lessons in each unit. These are Our American Story, American Biography, American Landmark, Daily Life, and God’s Wonder. Since the curriculum has 30 units, it has 30 lessons in each of these categories. One of the American Landmark lessons is Carnegie Libraries. Since several of the first Carnegie Libraries were built in Pittsburgh, I asked our family to include one of those on our itinerary.

This is how our lesson on Carnegie Libraries begins:

Andrew Carnegie was born in 1835 in Dunfermline, Scotland. Andrew’s father William was a weaver. However, the weaving business in Dunfermline suffered when a factory with steam-powered looms opened there in 1847. The Carnegie family emigrated to America.

Andrew and his father found work in a cotton factory. Andrew, who was 13 years old, began as a bobbin boy. He later became a messenger at the Pittsburgh telegraph office. Andrew hungered for knowledge. When he delivered messages to theaters, he made the deliveries at night so that he could watch plays by Shakespeare and other playwrights.

As a child in Scotland, Andrew had listened to men read aloud and discuss books they borrowed from the library. While working at the telegraph office in Pittsburgh, Andrew met Colonel James Anderson. Anderson opened his personal library every Saturday to any working boy in the city who wanted to borrow a book. Carnegie decided that if he ever became wealthy, he would provide opportunities like this for others.

Carnegie did become fabulously wealthy. He believed that wealthy men should not live extravagant lives. He believed that they should provide a good living for their families and give the rest of their riches away. Carnegie chose to use his money to spread knowledge and promote world peace. He donated money to many causes, but he said that a library was the best gift to give a community because it gave people a chance to improve themselves. He believed that even though those who went to libraries were a small number of the entire population, they were the ones who would help their communities the most.

Carnegie and his charities helped to build 2,509 libraries. Of these, 1,679 were in the United States. He funded others in Great Britain, Canada, Australia, New Zealand, South Africa, the West Indies, and other countries. After Carnegie began giving money for libraries, it gave him great joy to learn that his father had joined with other weavers to create the Tradesmen’s Subscription Library in Dunfermline.

By the time Carnegie died in 1919 at age 83, he had given away almost 90 percent of his wealth.  Thirteen charitable trusts and institutions continue the philanthropy of Andrew Carnegie.

Carnegie helped to build libraries in communities that would agree to continue their operation. He expected those communities to be responsible for them and did not provide for their ongoing operation. I understand and agree with this philosophy because people do appreciate things more when they have “ownership.”

I read about various Carnegie Libraries in the Pittsburgh area, hoping we could visit one that had not changed much since it had opened. I was sad to learn that some had changed a great deal. I was also sad as I read about some of the reasoning behind the changes. I understand adding spaces for technology and updating plumbing and electrical service and such. I do not understand removing beautiful architectural features.

I finally chose the main Carnegie Library of Pittsburgh as the one I wanted to visit. 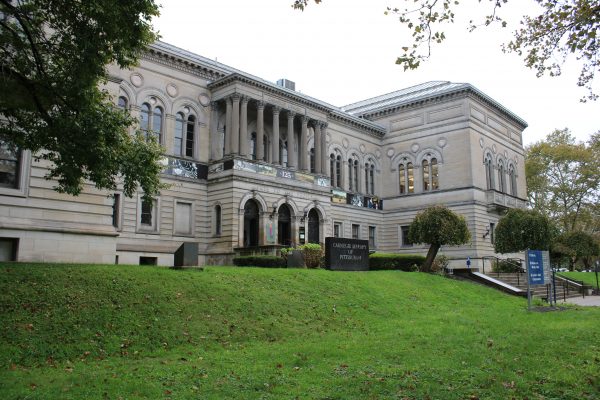 Andrew Carnegie was directly involved in planning this library. He dedicated it on November 5, 1895. In this photo from 1900, high school students visit an art gallery once housed in the building. 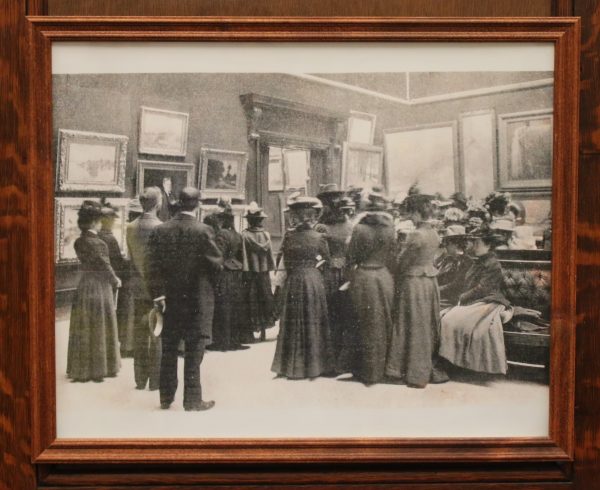 The library is currently celebrating its 125th anniversary. 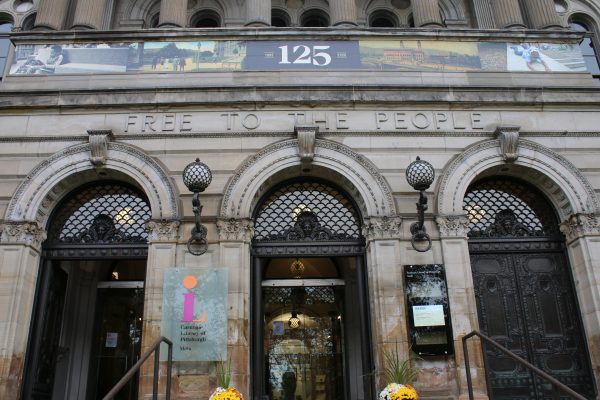 I was grateful for the beautiful features still present in the building, such as these beautiful green glass panels which allow light to pass through them and serve as both floor and ceiling. The spaces between the glass and the stacks are open. It was fun to peek through to other floors. 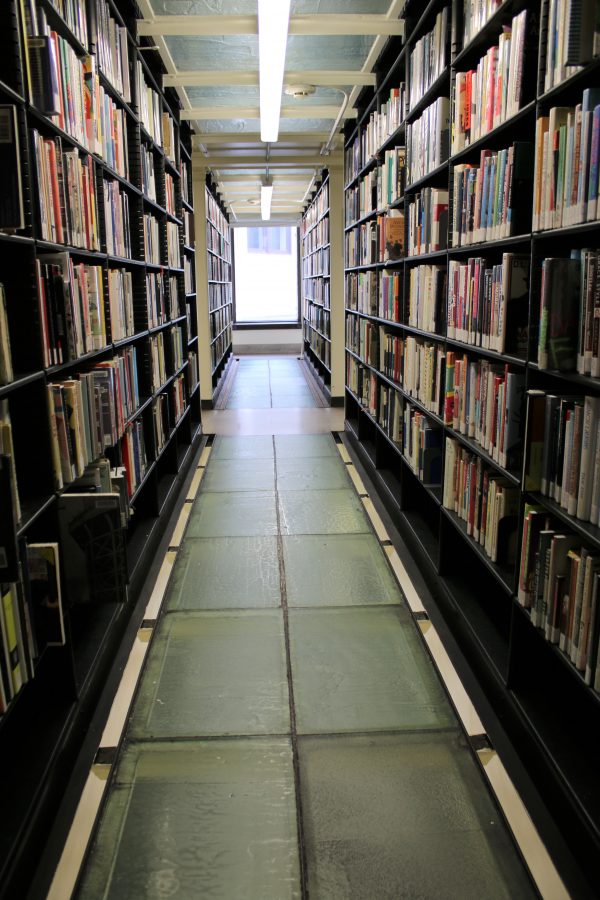 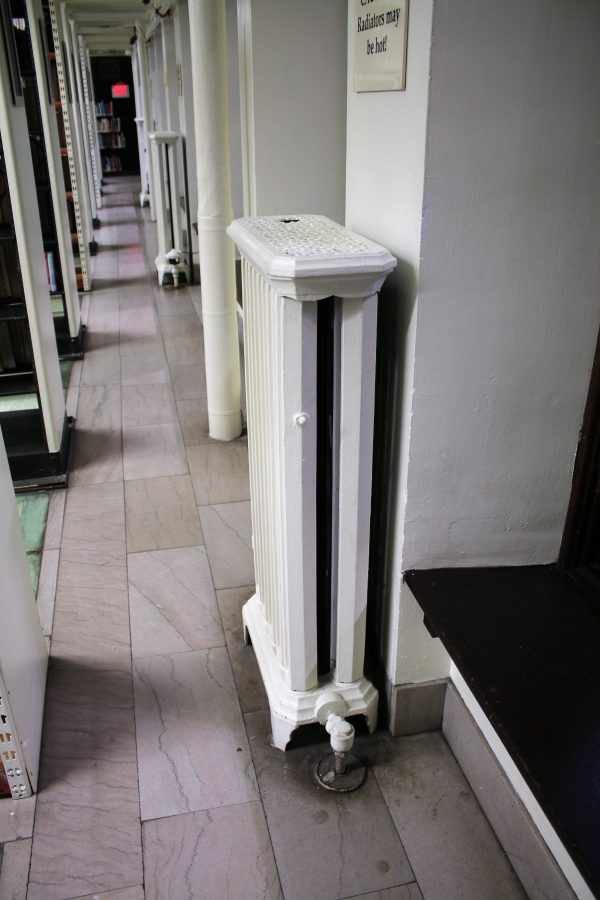 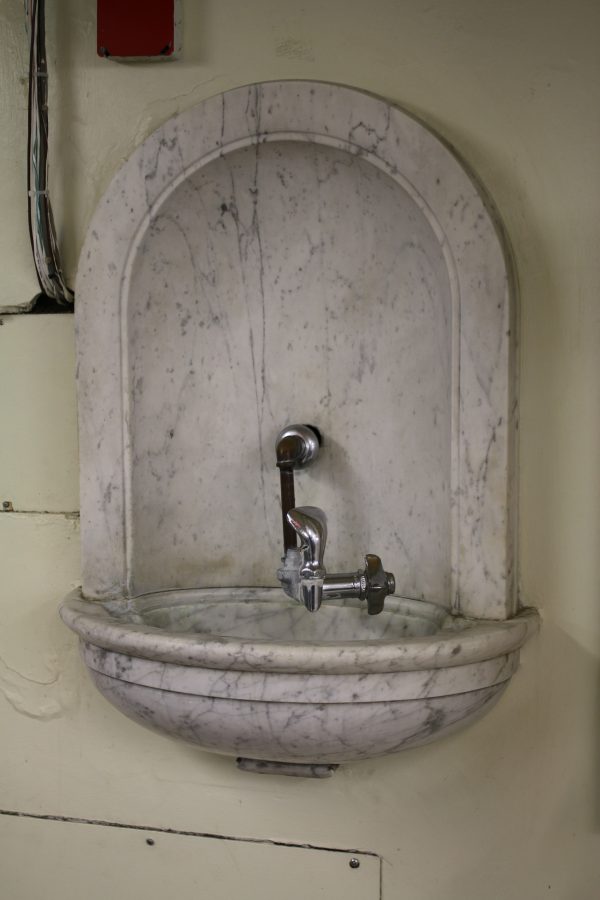 . . . and these beautiful architectural features. 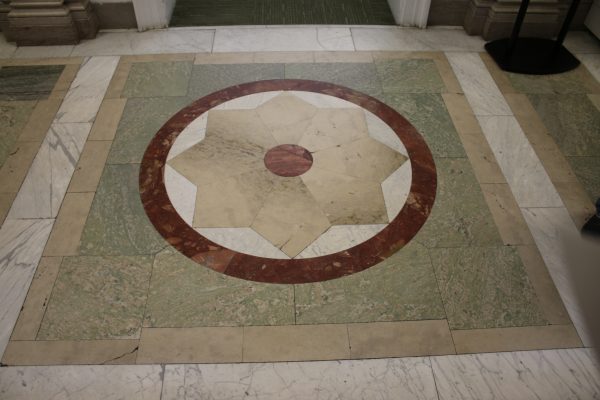 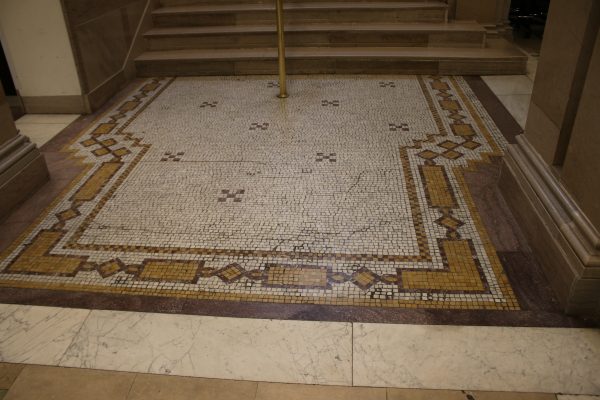 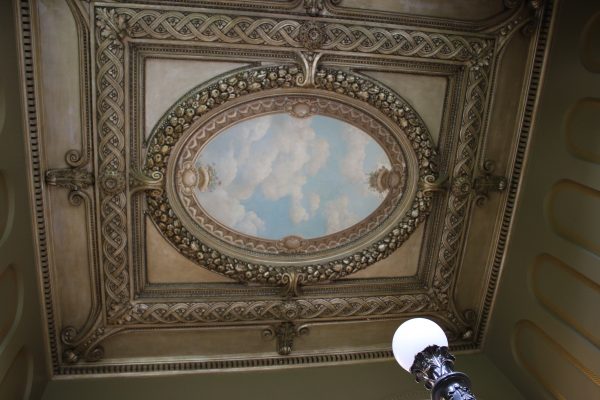 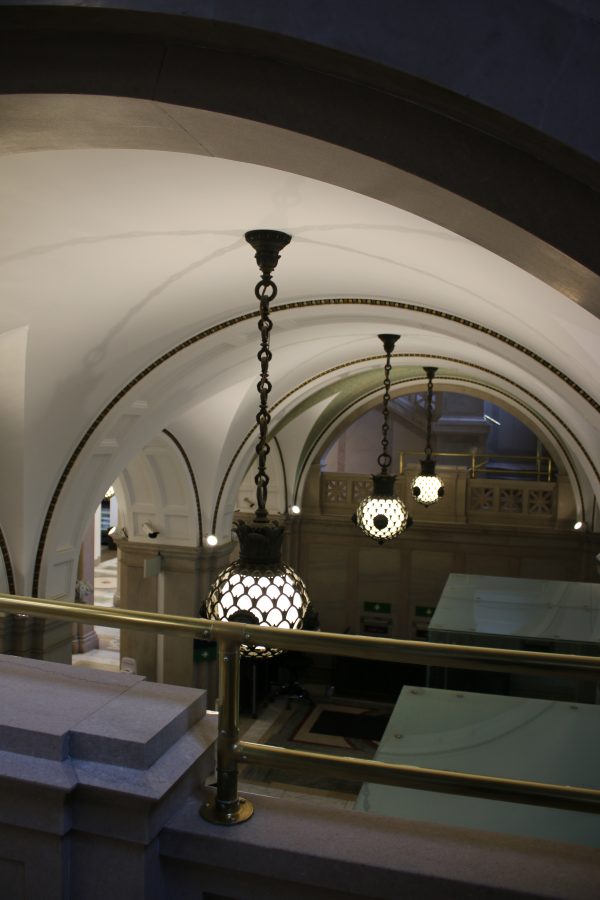 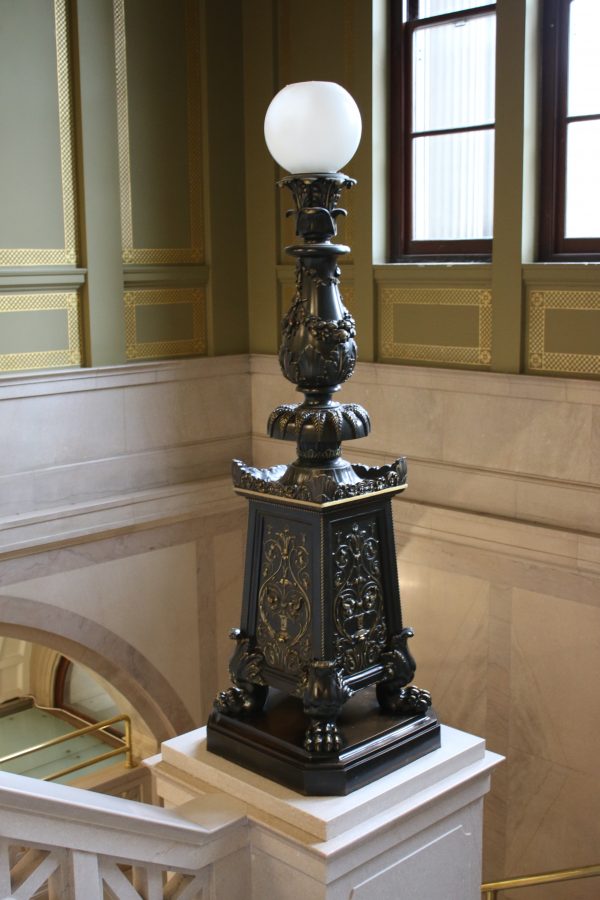 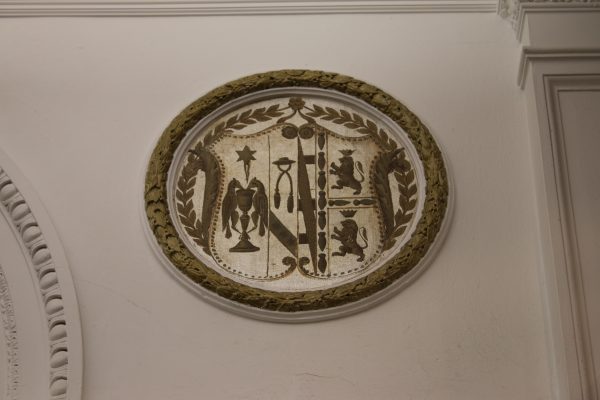 This was one of my favorite rooms. 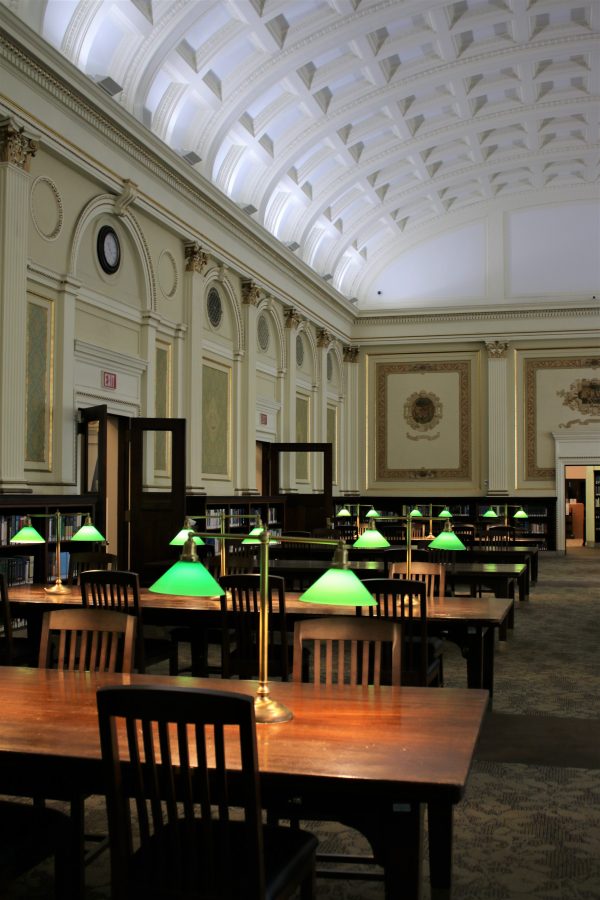 This meeting room had recently been restored. 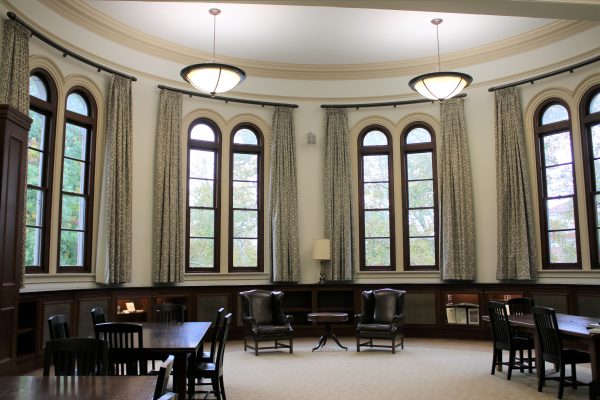 While this grand structure is a treasure, I was also sad that the staff seemed to know so little about the history of this wonderful building. I left not really knowing what was original and what had been altered during various makeovers. While talking to staff members, I again heard about changing needs as justification for alterations.

As we stood outside the building after our visit, I thought about change. People should think hard about changing what people thought was important in the past. Before deciding to make changes, we should stop and remember the values of those who built or created what we are wanting to change. What were their purposes? Is the change that we propose really better or will we be losing something of great value? Sometimes it would be better to restore the values and adapt ourselves to those values rather than changing what people once thought was important for what is in vogue now.

This is what the Lord says:
“Stand by the ways and see and ask for the ancient paths,
Where the good way is, and walk in it;
Then you will find a resting place for your souls.”
Jeremiah 6:16a 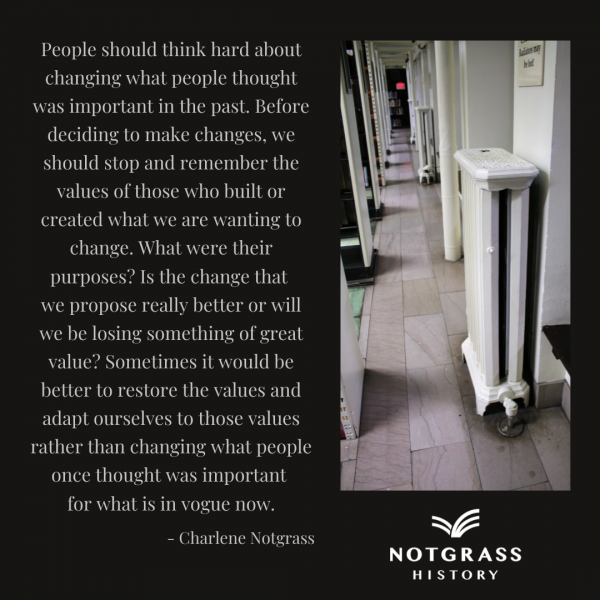