I never collected Beanie Babies, but I do have two: a camel and a hippo. in our home I display the camel beside the piece of olive wood and replica of a Dead Sea Scroll that Ray’s daddy brought us back from Israel in 1977. The hippo sits beside my computer. While our grandson Wesley was playing at my feet the other day, he asked for the hippo. Of course, I handed it to him. That was when it occurred to me that I could share the story of the hippo with you.

John, Bethany, and Mary Evelyn brought the hippo to me in the hospital in 2000.

I had been very, very tired that fall. On a hike to the top of Cumberland Gap with Ray, John, Bethany, Mary Evelyn, and my parents, I was the one who was most exhausted. I remember lying flat on the ground when we got to the top.

I was almost 48 and pre-menopausal. My monthly cycle was on overdrive. I was drained — literally.

Mary Evelyn wrote and directed her second play, Faith Is the Victory: Life in America During World War II, 1940s, that fall. Here’s our cast. Mary Evelyn is the tallest girl on the back row. The boy in the denim shirt in the center of the photograph (no tie) is Ethan, who is now a husband, father, and the number one shipper here at Notgrass Company. His mother has become a dear friend. 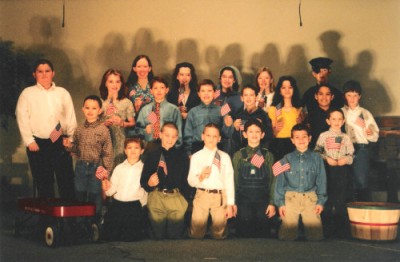 Back then we only had one performance. When it was over, I did the same thing I did at Cumberland Gap. I lay flat on the front of stage. As we say around here, I was past tired.

Something was different this time though. Our family doctor was the homeschooling dad of three of the little boys in the cast. When he saw me there, he asked me how I was doing. I said, “Well, to be honest, Chet, I’ve been really tired.” He said, “Come to my office tomorrow.”

I obeyed. A staff member checked my blood for anemia and then Chet came in to talk to me. He said that I was going straight to the hospital and they were going to give me blood. Scared to the gills (as we say around here) of getting blood, I asked him if he would do the same thing if it were his wife. He said, “You are at risk of a heart attack or a stroke if you don’t.”

His staff told me to sit down in a wheelchair and they wheeled me down the sidewalk to the hospital next door. That night I lay in a hospital bed while I received one pint of blood after another until I had received four. As each pint was started, I prayed fervently that the blood would be clean. It was.

When John, Bethany, and Mary Evelyn came to see me that night, they brought me the hippo. He sits by my computer to remind me that God gave me a second chance at life.

Every day is a gift.

This is the day which the Lord has made;
Let us rejoice and be glad in it.
Psalm 118:24