The lights come up dimly at the beginning of Act II of Free at Last, revealing slaves laboring in a field. While they work they sing a song with a double meaning: 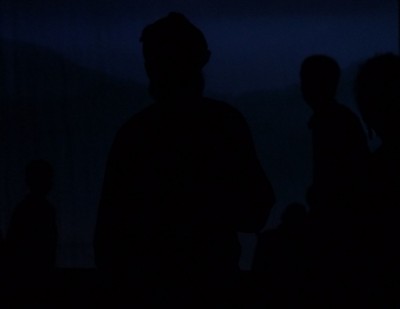 Mariah enters singing, “Steal Away,” while Elizabeth Collins stands reading by her front porch. Mariah asks her what she is reading about and expresses her desire to have a book to read. 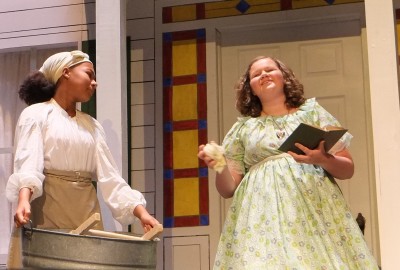 Mrs. Collins comes on stage, telling George to hang a bunting for their Fourth of July party. She tells Elizabeth to make sure he gets it straight. As George works, Elizabeth tells him that he doesn’t look like a slave and asks him why he is one. George tells her that his great-grandmother was a slave, so he is, too. Elizabeth tells George that she wishes her father didn’t own anyone. 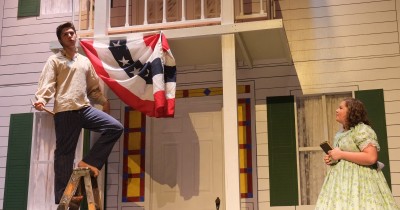 Guests arrive for the Fourth of July party, which begins with the youngest guests singing, “Turkey in the Straw.” 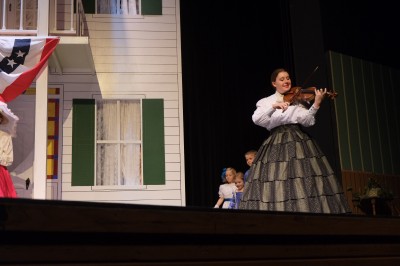 The young party guests are adorable, so enjoy these photos of several of them. 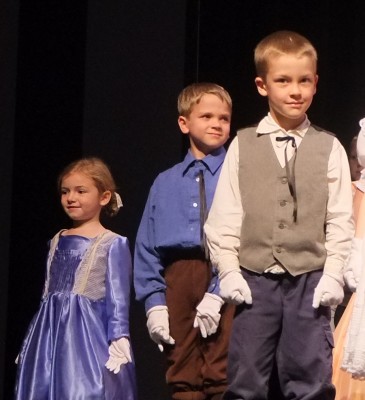 After the children sing, Mr. Collins asks them questions about the meaning of Independence Day.

Various children tell facts about the American Revolution, before two little girls discuss why slaves are not free. Mr. Collins explains with a little too much firmness in his voice that Independence Day is about American citizens which slaves are not!

Mrs. Collins tries to change the subject by calling on a child to do a recitation. She recites a portion of the Declaration of Independence.

The party ends with Mr. and Mrs. Collins and guests dancing the Virginia Reel.

After the party, slaves walk stealthily in the darkness, singing “Steal Away.” As they gather, they discuss the dangers of their secret meeting, while acknowledging that they feel a little bit of freedom when they “steal away” sometimes.

When all have gathered, a slave asks Granny Ann why she has called them together. She tells them that since the white folks had a party, she wanted them to all have a party, too. The slaves talk about when they will all be free, confident that either on earth or in Heaven, they will someday be free. Together they sing, “Free at Last.”

After the others leave, George tells Granny Ann that the party at the big house made him sick. He says slaves have no life, no liberty, and no happiness. He and Bobby are running away to look for all three. Granny Ann tells them that Mr. Fairbanks gave an astronomy lesson so that he could tell her things she could pass on if she ever needed to.

Granny Ann tells George and Bobby the directions Mr. Fairbanks told her and also where to find a hidden boat which can take them across the Ohio River. She promises to pray for them and begins to pray while George and Bobby sing, “Oh, Freedom.” 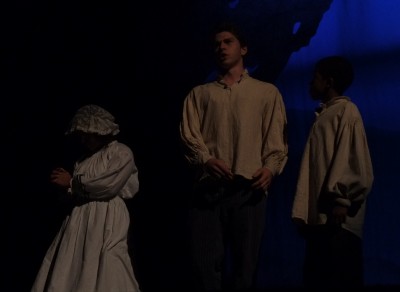 The next day Mr. Fairbanks teaches the Collins children a geometry lesson, but Elizabeth asks him to change to a reading lesson. She asks him how to teach someone to read. Mr. Fairbanks tells her that he would first make sure the student knows he was a valuable and intelligent person. He offers to loan her a book in case she ever wants to practice or pretend she has a student who doesn’t know how to read.

Overseer Matthew Harris runs onstage and bursts into the house looking for Mr. Collins. Mrs. Collins protests that Mr. Collins does not like to be disturbed. Harris tells her that he would want to know that he has lost valuable property. 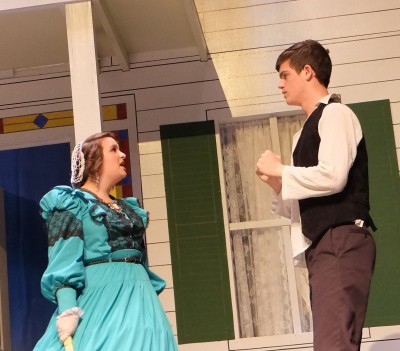 Hearing the ruckus, Mr. Collins comes out the front door and learns that George and Bobby have run away.

Later, in Cincinnati, abolitionist women mend clothing for runaways and discuss what has happened to people they have helped, including Phillis and Essie. The girls are now enrolled in the only school in Michigan that will take black students.

As they work, the women sing, “I Am An Abolitionist.”

In God’s great name do I demand
To all be freedom given,
That peace and joy may fill the land,
And songs go up to Heaven. 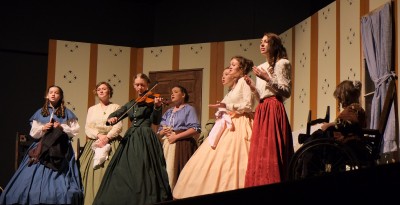 When Mrs. Miller answers a knock at her door, she finds George carrying a tow sack. George asks if the quilt hanging on her line is out so that someone who needs it might see it. Recognizing the import of his question, she excitedly tells him that it is indeed.

George opens his sack and the ladies (and audience) laugh when out comes Bobby! Charlotte gives him a mended shirt. 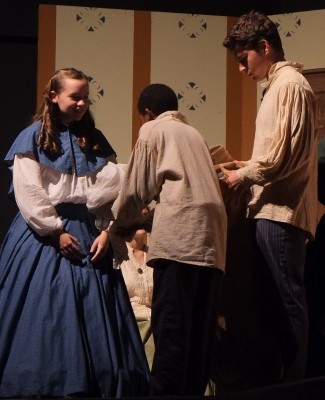 Another abolitionist gives a shirt to George, calling him, “Sir.” George tells her that he has said that word to white folks all his life, but that it has never been said to him.

When Mr. Miller comes in, he tells George and Bobby that they are expecting other passengers that night, so another agent will take them to the next safe house. Adelaide Walker hurries in to get them. She sees Bobby, but wonders where the other slave is. George replies: “I am de second. My great-grandmother was a slave, so I am, too. Leastways, I was. I ain’t nobody’s slave no more. Come on Bobby. Back in de sack.”

As they leave, Bobby shouts, “Bye,” from inside his sack.

I was impressed with the acting of every member of the cast. George and Bobby were good sports. Bobby learned how to get in and out of that sack that was none too big and George learned how to carry a very heavy parcel–no small feat for either one. They poured themselves into their roles and were very convincing. Saying “Bye” from inside the sack wasn’t in the script. When Bobby ad libbed it one day, we loved it and it became a fun part of the play. The audience loved it, too.

Children have great ideas. I’m glad that your children are learning in an environment where they are free to express their great ideas and where they don’t have to be slaves to a system with no room for their own personal wonderfulness!

Train up a child in the way he should go,
Even when he is old he will not depart from it. [italics mine]
Proverbs 22:6, NASB

As you can see, we are tweaking the blog site. Don’t be surprised if the blog looks different every day for a few days as we adjust to a different way of doing it. Thanks for your patience.