When Ray’s daddy Wes was a twenty-eight-year-old American soldier waiting in Bristol, England, for General Dwight D. Eisenhower to give the orders for the First Army to cross the English Channel to help liberate Europe from Nazi Germany, he met a girl at church, Joan — age sixteen. She lived in a townhouse with her father, her sister Audrey, her step-mother (her mother’s sister whom her father had married after her mother died of cancer when the girls were eight and ten), her half-brother Geoffrey, and her grandfather. Older half-brother Bernard was away serving with the Merchant Marine.

At night German planes were bombing Bristol, as they were many English cities. Bombings were heavy in Bristol because a Rolls Royce factory there had been converted to produce planes for the Royal Air Force. The English welcomed American soldiers who had come to help them fight off their Nazi enemies.

When Joan and Wes began courting, he visited their townhouse often. When he came, her grandfather asked, “Is this one of our gallant defenders?”

Eisenhower’s order finally came in June of 1944. Many American soldiers left England on D-Day. Wes received his orders for the day after D-Day, which is known as D Plus 1. He left England from Plymouth, as the Pilgrims had done hundreds of years before, but his destination was not North America, but the beaches of France.

In spring of 1945, when Wesley was thirty, Joan was eighteen, and the Allied forces, which included the United States, France, the Soviet Union, Australia, Belgium, Brazil, Canada, China, Denmark, Greece, the Netherlands, New Zealand, Norway, Poland, South Africa, and Yugoslavia, were close to victory, Wesley received permission to return briefly to England. There he and Joan were married.

When the war was over, Wesley returned to America. A few months later, Joan was able to join him, too. She made the trip by ship, just as he had, but her ship included many, many other girls from Europe who had also married American soldiers. Wes went to New York City to rejoin his bride and bring her home.

At home in Columbia, Tennessee, where Wesley had grown up as the only child of Earl Eugene and Maggie Pearl Henley Notgrass, Joan and other women who had also married American soldiers joined together to form the Allied Friendship Club. When Ray and I married, some of Joan’s friends from the club gave me a wedding shower.

When Ray and I attended his high school reunion at the first of September, we saw Caren the daughter of one of Ray’s mother’s fellow club members. Caren’s mother had been from Sweden. Ray’s classmate and her sister have been looking through an old scrapbook of their mother’s. She said she would send Ray some copies.

Yesterday Ray received a clipping from the Columbia Daily Herald. I decided to take a break from telling you the story of the play to share the clipping with you. A newspaper photographer had gone to the home of the host of a meeting of the Allied Friendship Club to snap this photograph. Notice how dressed up the ladies are for a meeting in one of their homes on a Friday evening. Above the photo is the statement: “These European Beauties Now Call Columbia Home.” 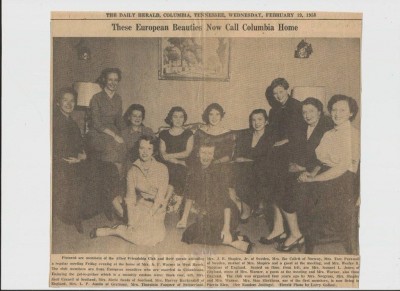 The “European Beauty” at far right is Ray’s mother. Nations represented in the photo include Scotland, Germany, Switzerland, Sweden, and Norway. The lady to the left of Ray’s mother in the photo was a visitor that evening. She was the mother of Caren’s mother and therefore the grandmother of Ray’s classmate. This family must be close, because the sisters have been delayed in getting clippings to Ray because Swedish relatives were here in September.

Allied friends. That’s what we all need. Friends. Allies. That’s exactly what Jesus wants us to be.

By this all men will know
that you are My disciples,
if you have love for one another.
John 13:35