When I was eighteen, a college friend asked me to be the maid of honor at her wedding. On the big day, I got dressed in a pretty yellow lace dress, picked up my bouquet, and stood in the back of the church ready to go down the aisle. When my turn came, the photographer snapped my picture a few steps from the back of the church. The picture is terrible; the expression on my face is awful. Maybe other people thought I was embarrassed or shy. Only I knew the real reason. I knew my friend was making a terrible mistake. I had tried to tell her, but she was too awestruck to listen. The marriage lasted about ten years. Then it was over.

But it didn’t have to be. People can change for better or worse — and there is not a single person breathing today who doesn’t need to change — for the better. I have probably shared this before but it is too powerful not to repeat. When I was a young wife, I was sitting in a Sunday School class when our godly and wise teacher instructed us in something which I have forgotten. I do remember the response of a young man in the class though. He said, “That’s just the way I am.” Our teacher replied to him, “There is only one I am.” Then he told the young man that the rest of us are in the business of changing.

That young man and his wife are not married today either. Perhaps he wanted to stay, in his words: “. . . just the way I am.”

On Saturday Ray and I, along with one of our daughters and her two children, drove to Kentucky for a wedding where I felt very different from the way I felt in 1972. This was one of those beautiful weddings where you know that two children of God are making a real, lifelong, total commitment to be one with the other until death do they part. I love those kinds of weddings. 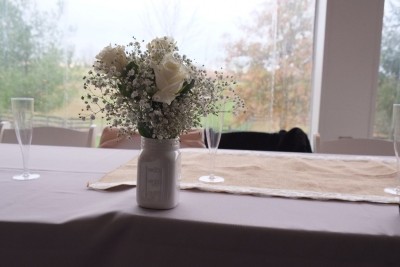 This bride and groom had waited to find each other longer than either of them had wanted to wait. It wasn’t until they did their first dance that I cried. The joy on the face of that groom whom I have known since he was about eight years old did me in.

Each table at the reception was numbered. At table 9, we were supplied with notepaper, pens, and a large envelope with a number nine on it. We were instructed to write a message to the bride and groom which they could open on their ninth anniversary.

Ray and I had already been to one party to celebrate this couple. It was an evening of blessing hosted by the groom’s parents. Their living room was filled with our hosts, three of his siblings (all five were at the wedding, staying close, and obviously enjoying one another’s company), and several friends, most of whom were old enough to be the young couple’s parents or even grandparents (Ray and I were in the parent category, by the way). We were all encouraged to give them a blessing of encouragement as they began their lives together. I knew everyone in the room that night. That made their words powerful for me, because I have watched these people live out what they shared.

One guest said that the best marriage books to read are Matthew, Mark, Luke, and John. That’s where we learn to follow in His steps. Doing that would definitely make a person treat his or her spouse right.

One guest does marriage counseling with her husband. She gave them a funny plastic ball and told them that when they have conversations, the only one talking should be the one holding the ball. That is excellent advice — and I think actually using that physical ball would help many couples really listen to each other.

The groom’s father told them really to live the 1 Corinthians they have heard so many times.

Ray encouraged the groom-to-be to build up his wife and love her like Jesus does. Ray certainly knows how to do that.

I encouraged the bride and groom to love each other’s families and to stay close to them. Honoring our fathers and mothers is a lifelong command. It is hard to do that with a spouse pulling in the opposite direction.

I liked the simple connection between the wedding and a happy anniversary that we found beside the centerpiece at our table. In between the two is a whole lot of learning and changing.

But we all, with unveiled face,
beholding as in a mirror the glory of the Lord,
are being transformed into the same image from glory to glory,
just as from the Lord, the Spirit.
2 Corinthians 3:18