Ray and I are in Richmond with Connor for the Home Educators Association of Virginia (HEAV) convention. We drove up Tuesday so we could visit with Ray’s nephew Chris, the ringbearer in our wedding, and his family on Tuesday night. This morning is set-up time and tonight the convention begins. We planned for yesterday to be a respite day in between the busy times.

We spent several hours sightseeing yesterday with my friend Wanda, whom I met through these Daily Encouragement posts, and with her daughter. We loved trekking around this city that is brimming over with history with them.

Our first stop was St. John’s Church where Patrick Henry gave a stirring speech that included some of the first words we all learned from American history: “Give me liberty or give me death!” Our guide, who was dressed in colonial attire, was animated and enthusiastic about the story he told us from American history; and he was also enthusiastic about homeschooling, being the grandfather of homeschooled children himself.

I learned today that this church is not only an historic place where George Washington, Thomas Jefferson, and many other patriots gathered one day, in defiance of the King of England, and listened to Patrick Henry. It is also an active church, where you can worship every Sunday. Respect for Jesus can be seen as you look in every direction.

As you sit in the pew, you read these words of Jesus. 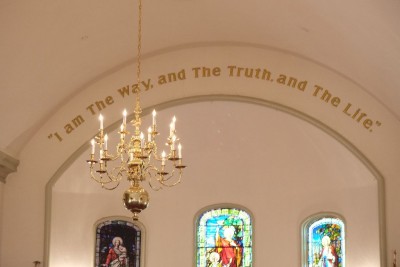 On the right side of the building is a reminder that Jesus is the Alpha and the Omega. 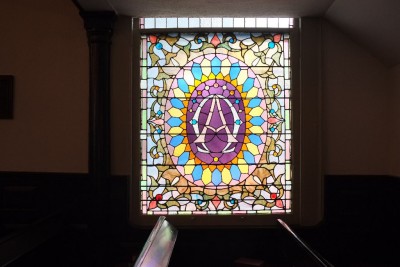 On the left side of the room, the left window reminds us that at the judgment, Jesus will tell the sheep that “to the extent that you did it to one of these brothers of Mine, even the least of them, you did it to Me.”

The right window illustrates when Peter, Andrew, James, and John left their nets and followed Jesus. 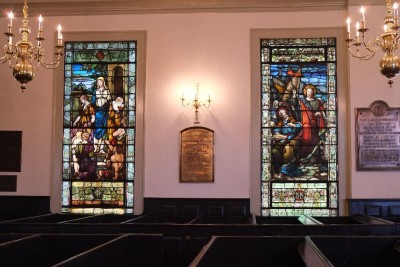 I didn’t take photos of the exterior of the building today because the front was covered with scaffolding, but I was able to find this one from the Library of Congress. 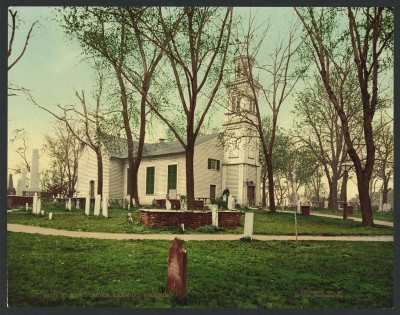 I did photograph this cute little building at the back of the church. It once housed the church’s resident “keeper.”

Our guide was enthusiastic about homeschooling not only because he has grandchildren who homeschool but also because of the homeschooled children he sees in his work as a guide. He is very impressed with them. I keep telling you that you are doing a good job. It is encouraging when you hear such positive reports from someone like this.

I know that sometimes you worry about whether you are doing a good enough job. Our guide told us two things that might encourage you. He said that Patrick Henry was homeschooled by his father for several years. He also said that Henry couldn’t afford to study law at nearby William and Mary, so he took the route of “reading law” as many lawyers did in the early years of our country. Henry studied for somewhere between six weeks and six months before going  to William and Mary to have his knowledge tested to see if he could be admitted to the bar. He was.

Keep holding on to the liberty available to you as a homeschooling mother and as a follower of Jesus.

But one who looks intently at the perfect law,
the law of liberty, and abides by it,
not having become a forgetful hearer but an effectual doer,
this man will be blessed in what he does.
James 1:25