When we are out of town, I like to stop at thrift stores and browse among the castoffs of people who live in other places. Ray and I made a brief stop at a Goodwill in Greensburg, Indiana, a few days ago. I found a blouse (in my favorite color), a pair of capris (bright and cheerful for summer), a shadow box frame (I decided just the other day that I wanted to frame some objects), and a blue and white plate (one of my particular weaknesses).

Circling the plate were these words: “A good mother makes a happy home.” I agree. 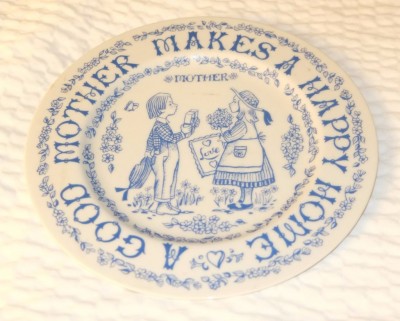 After I paid the young and friendly cashier my $8.00 plus tax, she asked me about my day. I told her it was wonderful and asked about hers. “Stressed,” she replied. I asked if the stress was connected to her job. She said that it was and then told me that people had been asking her about the fifty percent off the entire store deal. When she told them that the deal had been in effect the day before, they had become upset with her.

The cashier also told me about two women who had stood right in front of her and discussed how demeaning it would be to work at Goodwill. “I’m a senior in high school,” she told me and then she wondered what they expected of her.

You have the opportunity to teach many truths to your children. One of those truths is that every person is created in the image of God. The man who grows the wheat for my bread, the boy who makes my Subway® sandwich, the surgeon who puts a stent in my mama’s heart, and the girl who takes my $8 at Goodwill are people Jesus loves.

I’m so proud of you for teaching your children the most important things.

Be of the same mind toward one another;
do not be haughty in mind, but associate with the lowly.
Do not be wise in your own estimation.
Romans 12:16