Don’t ask me what this photographer was aiming at when he took this picture, but here we are, Mother, Steve, and me, in front of Boyd’s Market. I must have been about six years old. I’m sure that Mother had made both of our dresses. As you can see from the open book sign above my head, the store was modern–we were listed in the yellow pages! You may have to ask your own mother or grandmother what those are. 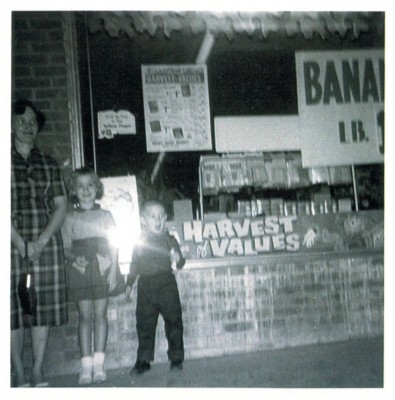 I think the first number in the price of bananas is a one. Wouldn’t less than twenty cents a pound be nice? That sign looks as if it might have come pre-printed, but some of our front window signs were handmade. My Uncle Ronnie must have been the artistic one at the store, because he made them. He had an elaborate and super cool set of felt-tipped markers in graduated sizes. Some were huge. He dipped them into cups filled with colors of ink. Today we would print something off on a computer; back then people did so much more by hand.

Daddy Leland worked hard to keep customers. With Nashville’s big supermarkets only a half hour away, competition was stiff. Between the yellow pages sign and the banana one is that week’s full page ad in the weekly Ashland City Times. Another way Daddy Leland kept his name in front of the citizens of Ashland City was by giving away calendars like this one. 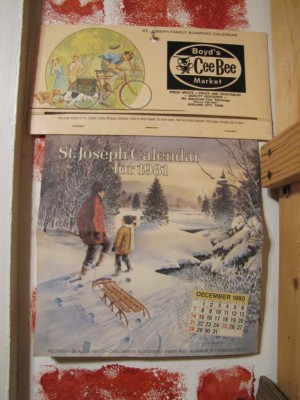 Sixteen years after the top photo and seven years before the calendar in the second one, I married Ray and my grocery experiences shifted to the consumer side of the picture rather than the side of the owner’s family. Though not the same as the ones in my childhood, my grocery store adventures continued.

As newlyweds, Ray and I learned to blend our ideas about just how grocery shopping was to happen. In Ray’s family, grocery shopping was a family event which happened every Thursday night before his dad got paid on Friday. They came home, put the groceries away, mixed up powdered milk and poured it into the homogenized milk (to make it go farther and still taste good), baked frozen pot pies, and ate them in front of the TV as they watched Gilligan’s Island.

Mother, Steve, and I walked to Boyd’s Market every Saturday night and did a little shopping while Daddy was still at work. As I recall, our bill would be about $10. Just like his own daddy before him, Daddy bought groceries all through the week, bringing home this and that as Mother needed them.

Like Ray’s family, he and I started out shopping for groceries together. I remember how weird he thought it was the first time I wanted to buy whole wheat flour. I don’t really know where I got the idea either, but we’ve been making whole wheat biscuits ever since. It was decades before we bought a grinder (like a good little homeschool family) and started grinding our own.

Ray thought generic brands were just fine, but I had grown up with name brands. After all, it was name brand companies that gave our family prizes like this one.

So, what is the right way to buy groceries? With gratitude to the God Who feeds us, with humble realization that there is more than one right way to do some things, with thankfulness that food is in the store, with love for the people we feed.

Whatever you do in word or deed,
do all in the name of the Lord Jesus,
giving thanks through Him to God the Father.
Colossians 3:17, NASB