Today is our baby girl’s birthday. In Proverbs 31:28, children rise up and call their mother blessed, but I rise up and call Mary Evelyn blessed. She is a wonderful mother to two-year-old Clara and one-week-old Wesley, a great wife to Nate, a faithful sister to John and Bethany, a devoted daughter to Ray and me, a joy to Nate’s family, and a blessing to many others.

When Clara was a few months old, Nate and Mary Evelyn bought some land nearby, put their beautiful log cabin on the market, and began making plans for a new house. Mev and Nate work in Notgrass Company and had been driving 45 minutes to come here for work. When their cabin sold, Ray and I invited them to move in with us so they could save money and time while they worked on their house.

You know how building a house goes. It almost always takes longer than you think it will. That is true when you are using a contractor, but Nate wasn’t using a contractor. Nate builds houses the way he learned from his mom and dad: 2 x 4 by 2 x 4, pipe by pipe, wire by wire.

Nate and his parents had already worked together to build three houses: one in Michigan and later one in Tennessee for his parents, and the log cabin. They came out often to help him with this one. Day after day Nate worked in Notgrass Company and night after night he worked on their home. At other times, he worked on the house in the daytime and then late at night for the company.

Month after month, Mary Evelyn and I shared shopping, meal planning, and cooking. When Ray needed a handyman assistant (or foreman), Nate was there. When we were out of town, they watched our house.

Meanwhile, we watched them be devoted and fabulous parents. We enjoyed our granddaughter Clara in a way that we know is likely a once-in-a-lifetime opportunity. As Nate, Mev, Ray, and I sat at our desks writing curriculum or sending out newsletters or preparing to ship orders, little Clara played at our feet. We played with her and read to her and smiled at her antics. We saw her learn to scoot, to crawl, and to take her first steps. We heard her first words and her first songs. We kissed her good morning and good night.

Month after month, our friends asked us and them, “How’s the house coming?” When they asked me, I got to tell them how much we were enjoying our housemates. I often quoted Ray’s line: “The hard part is going to be when they leave!”

A few months ago, Ray and I went into the kitchen for supper and Clara was wearing a Big Sister shirt. Another baby was on the way! We rejoiced. The push to get the house finished became even more intense. On August 24, Mev, Nate, and Clara slept in their new home for the first time. Eighteen days later little Wesley was born.

Ray was right. The hard part wasn’t sharing our home. The hard part is missing them now, but we are so happy for them. And we figure out some way to see them every day. Here’s little Wesley on his first visit to Notty and Little Mama’s house. He was almost two days old. 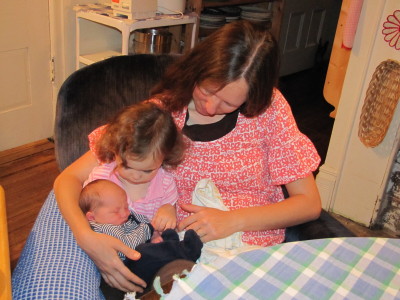 Happy Birthday, Mary Evelyn. Enjoy each night and day in your very own beautiful new home and thanks for staying close by Notty and Little Mama.