One of the booths at the WOW festival at Tennessee Tech on Saturday showcased the Eastern European country of Lithuania. By the end of the 1300s, Lithuania was the largest country in Europe. It lost its independence in 1795; regained it after World War I; was annexed by Russia and became part of the U.S.S.R. in 1940; and on March 11, 1990, became the first of the Soviet republics to declare its independence.

Instead of the Lithuanian booth being manned by international students at Tech, it was manned by a mother and her two children. Both children were dressed in native costumes. I would love to show you their picture. Their mom gave me permission to use it in one of our upcoming geography books, but I am hesitant to display it online.

The young man wore a long blue and white woven necktie and a woven multi-colored belt. The girl wore a black vest with a white lace-trimmed blouse. Her skirt was a large black and cream windowpane plaid. She wore a white fringed apron attached to a black, white, yellow, and red woven sash. Her hair was in two side braids and she wore fresh daisies on top. She also wore an amber necklace.

. . . and this doll give you an idea of the traditional national costume for girls.

A main feature of the Lithuanian booth were beautiful objects created from amber, a fossil resin used to make jewelry and art. Amber, peat, and arable land are the three main natural resources of Lithuania. 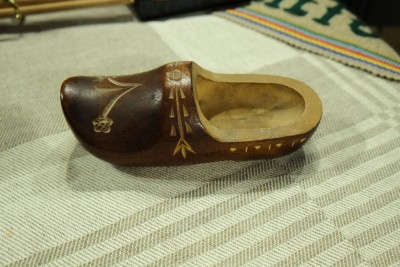 Like their Ukrainian neighbors, the Lithuanians create beautiful works of art from real hen eggshells like this one. 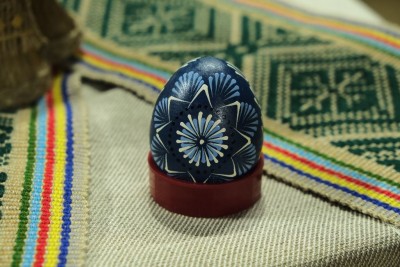 The mother who was manning the Lithuanian booth is not herself of Lithuanian heritage, but her husband who is now deceased was half-Lithuanian. Because her son (about 20) and her daughter (about 15) are one-quarter Lithuanian, she helps them celebrate their heritage. What a wonderful way to show her love for them, give them a sweet and continuing connection with their father, and honor her husband’s memory.

During my childhood and young adulthood, many people prayed for freedom for the people behind the Iron Curtain. God listened.

First of all, then, I urge that
entreaties and prayers, petitions and thanksgivings,
be made on behalf of all men,
for kings and all who are in authority,
so that we may lead a tranquil and quiet life
in all godliness and dignity.
1 Timothy 2:1-2