When I was in third grade, a new girl moved to town. We became school friends, church friends, and just plain good friends. I made a photo album of my youth a while back. This is Kathy’s page. 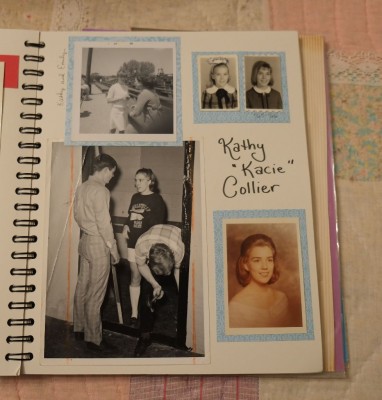 As little girls, we loved sitting beside one another at church, especially when we were having a singing. We enjoyed the acappella four-part harmony. Her alto was beautiful.

Sometimes we spent Sunday afternoons together. In my memory just now I am standing in the Collier kitchen on Fairview Circle. I was impressed by the table her mother set for Sunday lunch. Her Sunday silverware wasn’t silver; it was gold! After lunch, we went to the basketball goal in the backyard to play HORSE, a game Kathy taught me.

During our high school years, Kathy and I got nicknames. Kathy became KaCie because of her initials; I was called Charle (pronounced Charlie).

I gradually lost touch with most of my high school friends, including Kathy. I am thankful that in our fifties many of us reconnected. Some even call me Charle. Kathy and I became soul mates again, just as we had long ago.

We had a lot to catch up on. Kathy’s health was not good and so much of her story was tough, really tough, including losing a son in a car wreck when he was eighteen. He was on his way to play in the band at his first college football game.

Early in March four of us friends from high school, along with a sister of one girl and a friend of another, gathered at a state park in Kentucky for a girls’ weekend. Kathy and I rode up together and talked all the way. We and another good friend were roommates. The six of us talked and ate and talked and played games and ate and talked. We visited a farmers’ market, went antiquing, and had a do-it-yourself spa night.

That next week Kathy had a stroke. Over the next few weeks, she improved dramatically.

Last Monday we had a good chat on the phone. On Tuesday she was in the hospital again after another stroke.

Soon after we got to our homeschool convention booth on Friday morning, Kathy’s husband Bob called with the sad news that Kathy might never come home from the hospital. My heart broke and the tears flowed. Twice I almost prayed that God would keep her with us until I got home from North Carolina, but it just didn’t feel right to ask. In His mercy, He kept her here until I got to say goodbye Monday morning. Late that night Bob called to let me know that she had peacefully “breathed her last.”

Last night I talked to Kathy’s brother Keith. Keith said that she knew how to make lemonade with the lemons of her life. Kathy had so many lemons, but what I will remember is the lemonade.

I don’t know what I will miss the most. She had such a gift for listening to whatever I needed to talk about and for however long I needed to talk. She was wise. Her laugh and her smile brightened those around her. Her faith was solid and vibrant and constant.

I will not have to miss one important lesson she taught me. I will keep it close. Kathy, whose life had so many “no matter whats,” taught me to be joyful no matter what.

Rejoice in the Lord always; again I will say, rejoice!
Let your gentle spirit be known to all men. The Lord is near.
Philippians 4:4-5, NASB