After the Glass Doctor “fixed our pane,” we drove east toward Louisiana. The scattered raindrops on the windshield were a down payment for what was about to come. 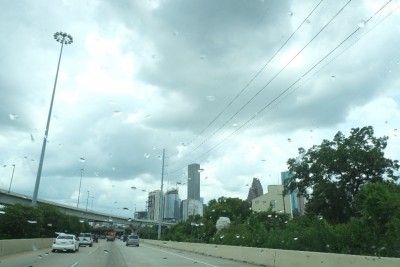 So were the dark clouds over Houston — which certainly looks like a city on the move. See the four cranes in this one section of downtown. 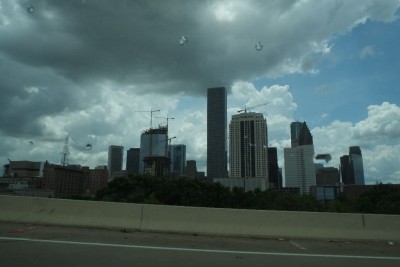 Soon we were rolling along, not so speedily, through torrential rains in southern Texas. Finally the rains were so heavy that we pulled off the Interstate somewhere not too far from Galveston. Guess what we found just off the exit — a museum, a little museum called the Chambers County Museum at Wallisville. What a great place to get out of the rain! We went inside to wait along with the museum staff of two.

Naturally, we took in the sights. This is part of the camera display. I remember my mama taking pictures with a Brownie, like the one third from left on the bottom row. She held the camera in front of her torso, looked down through the lens on top, snapped the photograph, and then turned a knob to roll the film to the next frame. 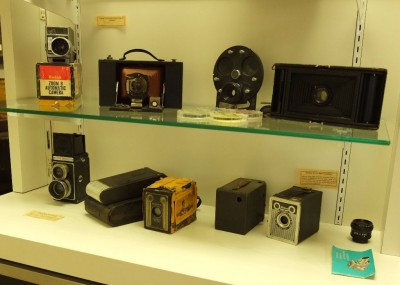 This picture of my brother Steve and me was probably taken with a Brownie. Steve was two and I had just turned five. Notice that dated photos is nothing new. However, the date was not of when the photo was taken, but when it was printed, which might be a week, a month, or a year later.

We saw a huge old camera. Can you imagine using that? 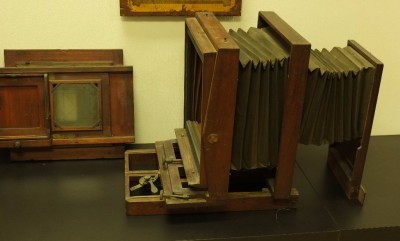 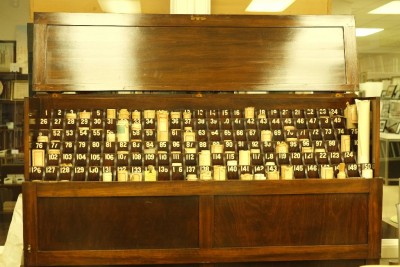 And we saw this baby buggy. I can’t figure out what ages the children were who rode in it. Looks to me as if any child small enough to fit inside would be just the right age to fall right out! 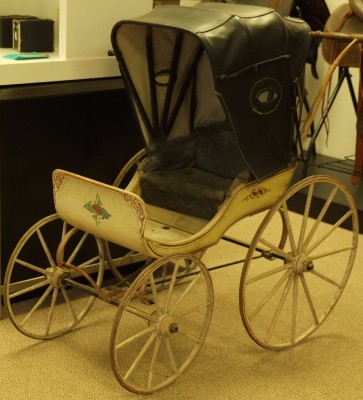 I was surprised to see Cherokee items, like Sequoyah’s syllabary, in a museum in Texas, but the museum director said that there was a major trading crossroads nearby and that many tribes came through there. 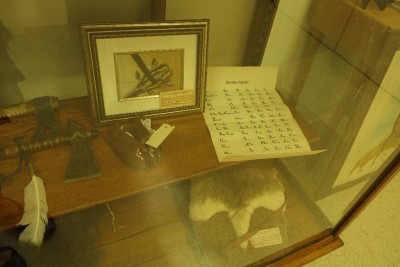 We saw the uniform of a soldier from World War I. 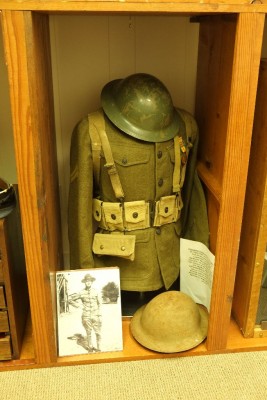 We even saw a selfie station. 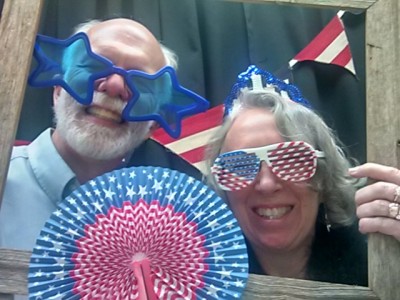 By the time we were finished, the rain was just a sprinkle. A member of the museum staff snapped our picture outside. 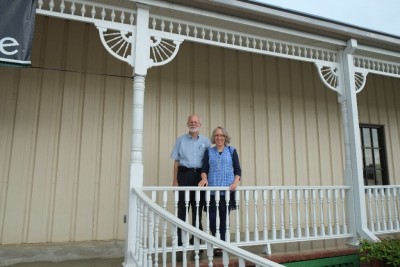 We got back on the road and eventually a sign welcomed us to Louisiana. 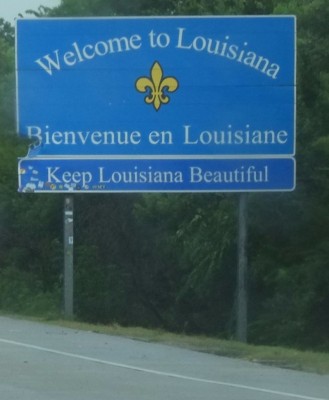 We got off the freeway and rambled through one little Louisiana hamlet after another to experience Louisiana off the beaten path. What we saw more than anything was trees, trees, and more trees. 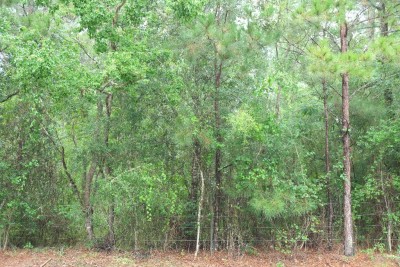 We saw evidence of the Acadians who came to Louisiana from Canada before the American Revolution. 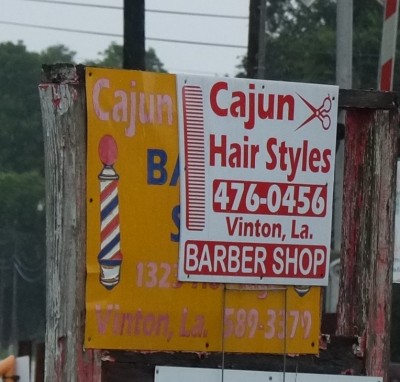 This sign in a tiny town honored Longfellow’s poem about the Acadian’s plight. 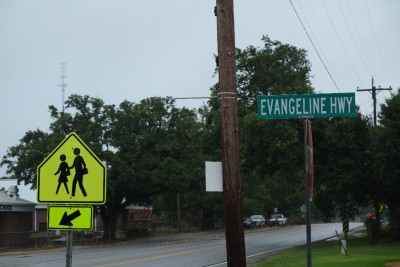 In DeQuincy, Louisiana, we walked around the already-closed railroad museum. 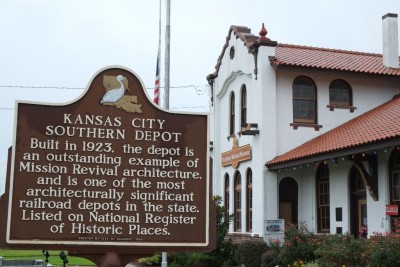 Near the front door was a fading magnolia, still beautiful and fragrant. 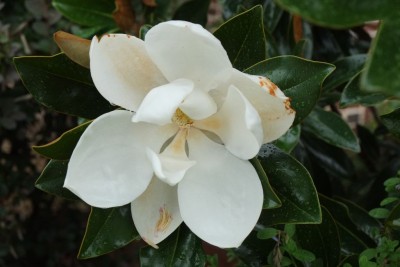 We played a bit in an outdoor waiting area by the depot . . . 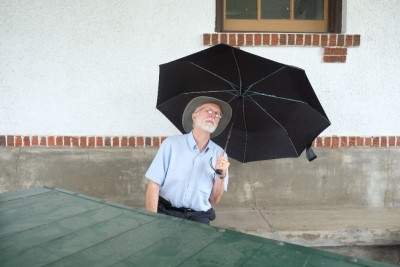 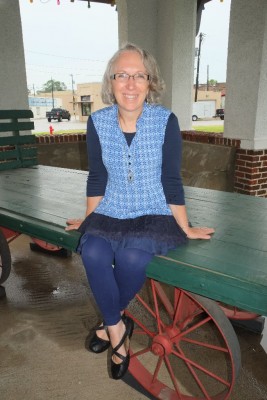 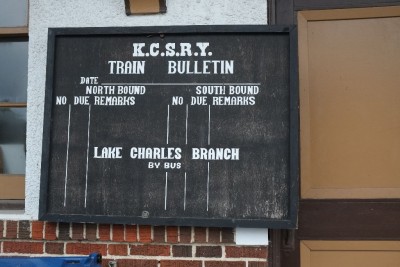 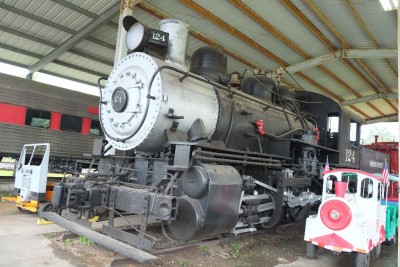 Near this caboose, we chatted briefly with a foursome all looking at their phones as they sat around a picnic table. I think they were all playing a game together. 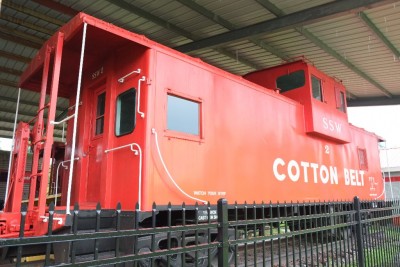 The afternoon faded into dusk and twilight . . . 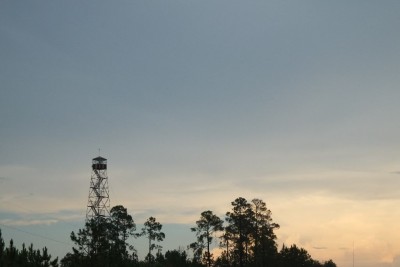 . . . and finally nighttime before we crossed the Mississippi River from Louisiana into Natchez, Mississippi.

I love seeing old stuff that is real and taking a little walk backwards in time, even if it is only inside a little county museum in south Texas or outside a closed one in Louisiana.

Maybe you can check out a small local museum sometime soon with your children. Then, maybe they will be a little more history savvy than the teenager a couple of our friends met recently. After our friends hiked to a waterfall they had visited thirty years before, they asked him to take their picture, telling him about their previous visit. He was amazed and asked, “Was the waterfall there then?”

Sing to the Lord with thanksgiving;
Sing praises to our God on the lyre,
Who covers the heavens with clouds,
Who provides rain for the earth,
Who makes grass to grow on the mountains.
Psalm 147:7-8