After our trip to the museum on Wednesday, Ray and I enjoyed a taxi ride from Montreal on the northern bank of the St. Lawrence River to Boucherville on the south side of the river. Traveling with us were Dan, another Pierre Boucher descendant from Phoenix, and his wife Kathy.

Our driver dropped us off at Eglise Sainte Famille Church, where we registered for Boucherville 350 activities for the weekend.

Across the street are these monuments honoring Pierre and his wife Jeanne.

We looked inside the stone church with its elegant wooden interior.

Then we went to register for the Boucherville 350th anniversary activities this week. 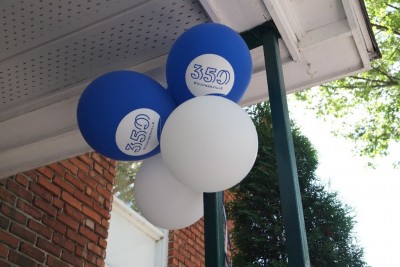 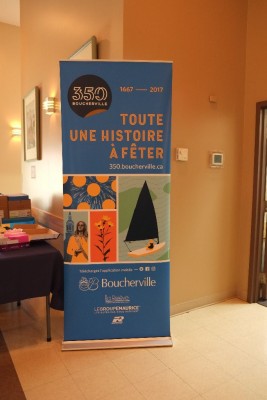 Here we met Michelle, the Canadian woman who has patiently been emailing me all the particulars I needed to know for our visit and who is serving as guide and interpreter for us few English speakers who are attending the events this week.

In the evening we attended a program and reception. In attendance were descendants of Pierre Boucher and descendants of individuals, called concessionaires, to whom Pierre gave land on his seigniory of Boucherville. Among the guests was this young couple who have been portraying Pierre and Jeanne Boucher at anniversary activities all year.

Here “Pierre and Jeanne” are photographed with some of the people who were portraying some of their fifteen children.

Before the reception began, our group of thirteen who are members of the Timothy Demonbreun Historical Society, based in Nashville, Tennessee, and who had traveled from several places around the country had gathered. This photo of the group was taken on Thursday.

Since I am a new member of the group, I didn’t expect to know any of the members of our group here in Boucherville, except for Ray. However, when most of us gathered for the trip to the Marguerite d’Youville museum, one lady looked very familiar to me. As we began talking to one another about where we were from, we discovered that we both grew up in Cheatham County, Tennessee, and that we had actually been in band together when she was a senior and I was a freshman. I learned that one of the men who worked as a butcher at my grandfather’s grocery store was one of her relatives.

Uncle Jack was a busy man, but he had time for children and he had a way of singling them out and making them feel important and special, something every child deserves.

And they were bringing children to Him
so that He might touch them;
but the disciples rebuked them . . .
And He took them in His arms
and began blessing them,
laying His hands on them.
Mark 10:13,16