On Sunday Ray, Mother, and I traveled a couple of hours away to Springfield, Tennessee, in Robertson County, the county where my ancestors established themselves after coming as pioneers to settle in Middle Tennessee in the winter and spring of 1779-80 (the men came in the winter and the women in the spring — but that is a story for another day).

Mother and I were both born in Robertson County. Mother and most of her cousins still live in Middle Tennessee, so Springfield is often the gathering place when Mother, her first cousins, and their descendants gather for the annual September Elliott Cousin Reunion.

During our potluck lunch, Ray and I visited with the husband of the youngest girl cousin. She’s in her early 70s. Her husband is a retired track and field coach and math teacher — and a godly man with a servant heart, too, by the way. Last spring he agreed to teach one semester at Springfield High School. His subject was Algebra I. His task was to prepare students to pass the end-of-the-year test. In each of his six classes (with 24 to 30 students each), he said, half of his students were classified as students with special needs. A teacher who specialized in special needs was assigned to assist him. For this he was very grateful.

When asked to return this fall, his answer was no. He told us that what he wanted to do was to teach his students, but that was not possible. All he could do was work to help the students pass the test. He said that it was not the students, but government regulations, that kept him from going back this fall.

It hurts to know that those students are not getting what they need to be able to do what God made them to do, but are instead being forced to fit a mold that some official (or many officials) somewhere have said they must do.

I am grateful that your children do not have to do that.

Jesus met people who wanted everyone to be the same, too.

Scene 3 of Touched by the King opened with a song and dance called “Tsafra Tava, Capernaum,” which means “Good Morning, Capernaum.” In between choruses with the women and girls of Capernaum singing the good morning song, townspeople sing about their special roles in the town.

The spice merchant advertises his spices. 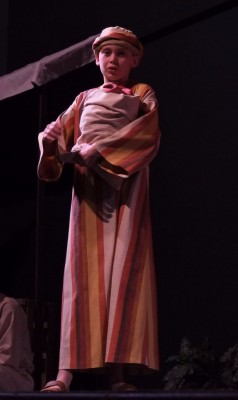 The baker expounds the quality of her bread. 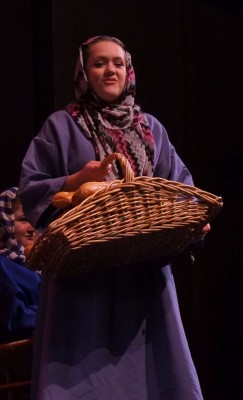 The fruit peddlers entice people to buy their olives, dates, and figs. 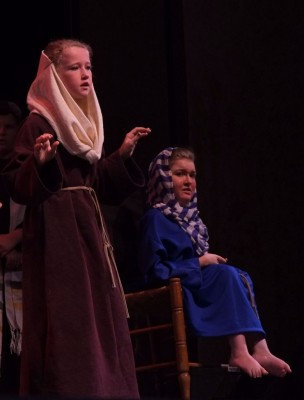 A Pharisee offers to help anyone know anything he or she is unsure about. 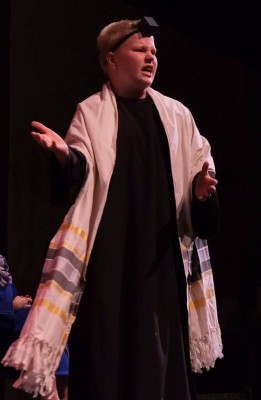 Our daughter Mary Evelyn sets each of her plays in a specific historic time period and works to help the actors and the audience experience historic events and places. This year a mother of a daughter who has been in many of them told me that her daughter said, “I have been to so many places through these plays.” That is exactly what Mary Evelyn wants a child to experience.

Because people are all different and have different convictions, Mary Evelyn works hard not to offend anyone. As Mary Evelyn tells the children over and over, the purpose of these plays is “To God Be the Glory!” She wants very much to do that well and to lead the children in doing that. This year was particularly challenging because her setting was Israel, and her subject was the life of Jesus. Mary Evelyn’s purpose in Touched by the King was to help the audience imagine what it might have been like to have been one of the people Jesus healed or one of the people who knew and loved those people. Every main event was taken directly from the life of Jesus, but she wove in imagined stories about the individuals He touched and the reactions of those around them.

One of the adult helpers asked Mary Evelyn one day if Jesus Himself would be portrayed in the play because she had people she would like to invite who had convictions about that. It was after dress rehearsal before Mary Evelyn made the final decision about how to honor Jesus and the convictions of her audience, concerning this question. In the end, one of the actors stood unseen inside a house and read Jesus’ actual words from the Bible during one scene. Near the end of the play, the actor portraying Jesus walked across the stage in shadow, carrying a cross; and he also appeared one time in shadow after the resurrection.

Mary Evelyn honored Jesus by letting people who were “touched by the King” tell us His story. After one performance, I listened as a grandfather told her that doing the play the way she did helped people not concentrate on the actor who portrayed Jesus but on the truths of His teachings and actions. That was reassuring.

As the townspeople of Capernaum go about their day, three women discuss what they have heard about the amazing miracle at the wedding at Cana. 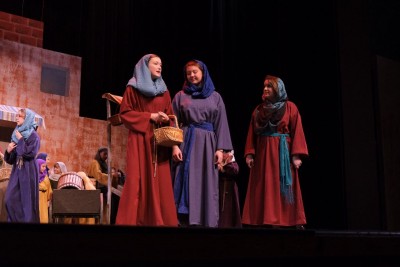 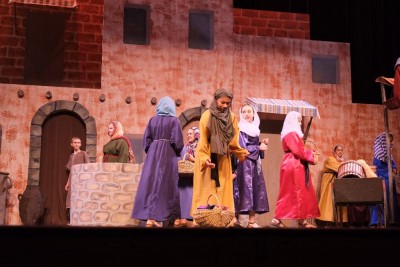 . . . under the watchful eye of a Roman soldier. 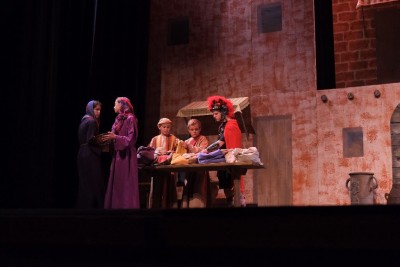 When two Pharisees walk into the marketplace, the vegetable peddler tells everyone that it must be time for prayer. 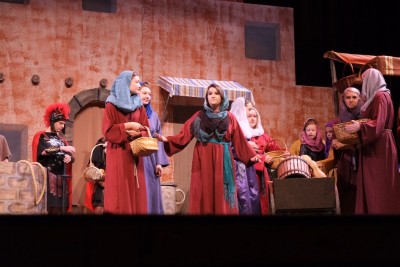 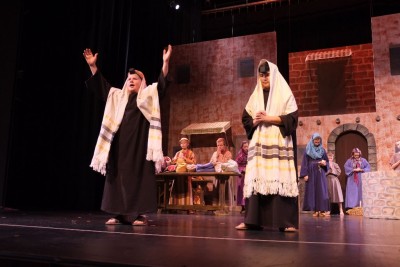 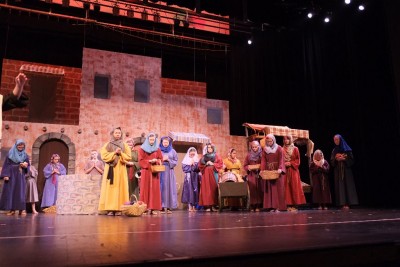 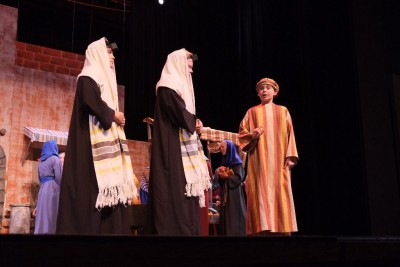 When the Pharisees leave, some town women discuss what they have heard about the teachings of the Man called Jesus of Nazareth. 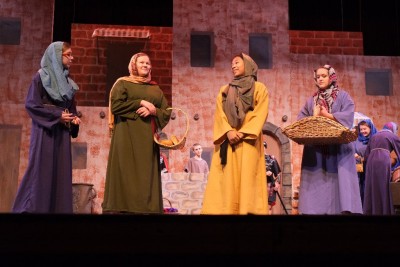 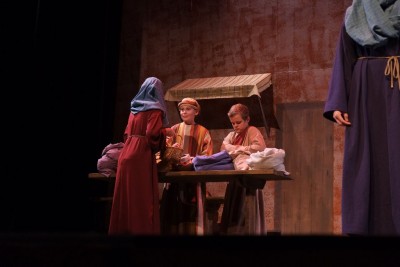 . . . and the fruit peddlers keep selling their wares. 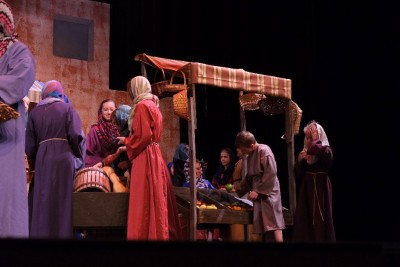 Suddenly, a demoniac bursts onto the street shouting . . . 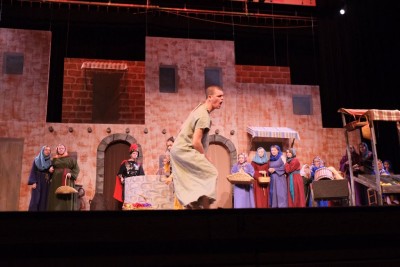 . . . before falling to the ground. The demoniac’s daughter rushes to his side. 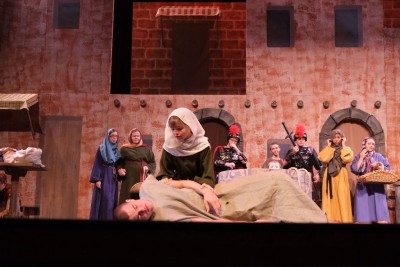 She helps him up and starts to lead him home. 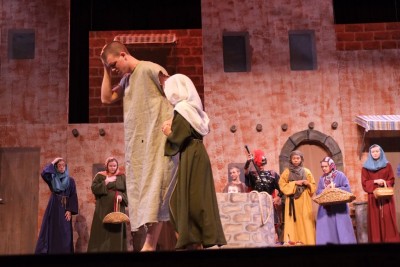 Other children make fun of the demoniac. One asks his daughter if she is not afraid of him. 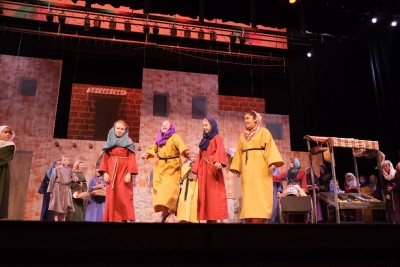 She tells them that she is not afraid of her papa, but only of the demon inside him. 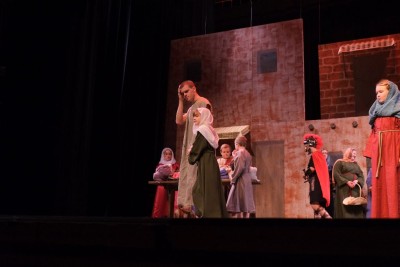 Then the children make fun of a boy who also has a demon. 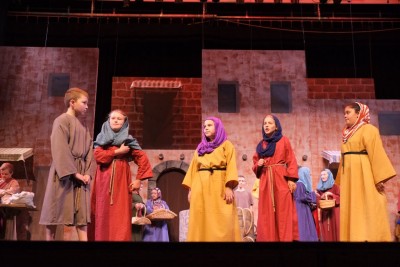 The little boy runs to his mother for comfort. 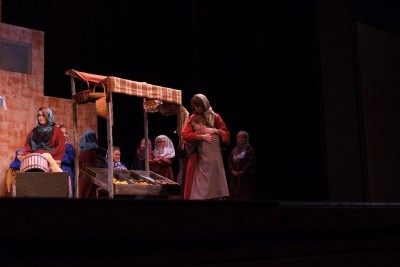 The scene ends with children pretending they are at a wedding while dancing and singing the traditional Hebrew song, “Hava Nagila.” 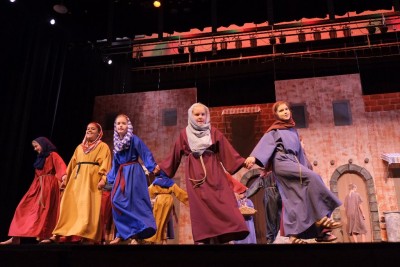 . . . may the Lord cause you to increase and abound in love for one another,
and for all people,
just as we also do for you;
so that He may establish your hearts without blame in holiness
before our God and Father at the coming of our Lord Jesus with all His saints.
1 Thessalonians 3:12-13