June 30, 1999, was my husband Ray’s last day as a full-time minister. On July 1, 1999, he began working full-time in what we then called The Notgrass Company (TNC). We were a three-person partnership including Ray, our son John, and me. From the beginning, our daughters, Bethany and Mary Evelyn, worked alongside us. In time they and Mary Evelyn’s husband, Nate, joined us as the six owners of the company.

We had no idea in 1999 that we would someday become Notgrass History because we didn’t even know then that we would ever write history.

Though we didn’t realize it at the time, something one homeschooling mama said at one of the very first homeschool conventions we attended changed our focus. She told us that she wished someone would write a history of Tennessee. Ray has a master’s degree in American history and another master’s in New Testament, and I have a bachelor’s in political science. We naively thought, “We could do that.”

After months of hard work by our whole family, we published a Tennessee history in 2000. In that first history curriculum, we wrote from a Christian worldview and included Bible instruction. We wrote 150 lessons with a Bible verse at the end of every lesson.

Meanwhile a Tennessee Technological University history professor, who was part of the church where Ray had recently served as minister, asked Ray if he would be interested in teaching one class of American history at the college for one semester. Additional income sounded very good at the time, so Ray said yes. He continued to teach that course for three semesters. With notes from those three semesters of history lectures under his belt, Ray came to me one day and said, “I’d like to write an American history curriculum for high school. I don’t know if anyone would buy it, but I’d like to write it.” He said that he would like to include primary sources and classic literature, which was the way his history and English teachers co-taught history and English when he was in high school, and that he would also like to add Bible instruction.

Ray researched, wrote, and greatly expanded those lectures. We published his Exploring America in 2002. Parents began to ask when he was going to write world history, so two years later, we published his Exploring World History. The rest–pardon the pun–is history. Requests continued, and now we have completed nine years of history and social studies curriculum. We have just three more years of curriculum to go to have 12 years.

Through the years, we have come to know and love many others who provide curriculum and supplies for homeschooling families. Several years ago, one of those families visited in our home for a few days. We learned during that visit that, though we had often had a booth near their booth at homeschooling conventions, the dad had no idea what we actually did. That’s when we decided to change our name from The Notgrass Company to Notgrass History.

Several weeks ago, I told you about the new headquarters we moved into this spring. We had a ribbon-cutting ceremony this past Tuesday and hosted an open house. People rejoiced with us about what they called our “dream come true.” However, for Ray and me, what Notgrass History has become is much more a great big surprise than a dream come true. What we are is astounded at how God has led us and at what He has done—and we are extremely grateful. 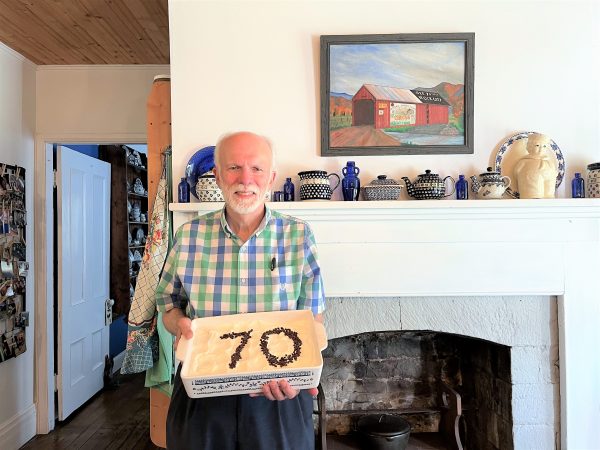 Today on July 1, 2022, twenty-three years after he began working full-time in what became Notgrass History, Ray is switching to working three-quarter time. He plans to continue leading our company as its president; updating his well-loved high school curriculum as needed; researching, advising, and editing to help us complete those three more years of curriculum; producing his popular Exploring History with Ray Notgrass podcast; and doing all of the other things he does to serve homeschooling families.  I’m so proud of him.

At the root of who my godly husband is is a deep respect for the Word of God. God’s Word has equipped Ray to do what he has done, and Ray continues to do a wonderful job of sharing God’s Word with others.

All Scripture is inspired by God
and profitable for teaching, for reproof,
for correction, for training in righteousness;
so that the man of God may be adequate,
equipped for every good work.
2 Timothy 3:16-17