One by one I have added perennials to my garden. Several years ago I stopped at a nursery and found an inexpensive four-pack of perennials. I am terrible at remembering the names of new things I plant. I’m not even sure this one was labeled. It was a perennial and it was cheap, so I took it home and planted the four little plants in a circle. As they grew, I began to wonder just what I had planted. It looked a lot like photos I had seen of marijuana plants. I didn’t just wonder; I worried if I was going to be arrested for planting these mystery plants. Here’s a close-up of the leaves. See why I was worried! 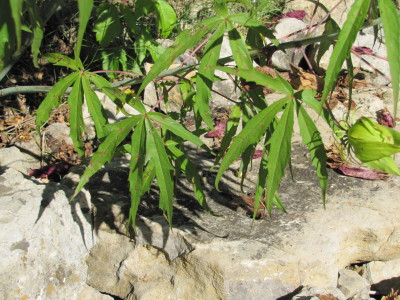 My mystery plant grew taller and taller until it reached about seven feet tall. It budded and then the buds burst into beautiful giant flowers measuring seven or eight inches across. Here’s an example from this year. See how the bright green sepals show through between the curves of the red petals. It almost looks like five small green petals between the mammoth red ones. Just beautiful. 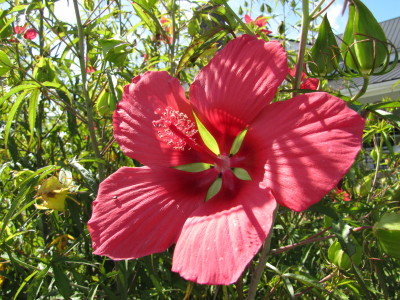 I was finally confident that I was not growing something illegal. In the fall, my four plants turned brown and crisp, but I left them standing so little creatures could use them for a home. In the spring about a dozen green stems sprouted up from the roots and I cut down the four tall brown stalks from the year before. The stems have continued to multiply year after year until now there are dozens.

One spring a new friend who was helping out at her sister’s nursery stopped by our house. While here, she identified my mystery plant, an old-fashioned hibiscus not seen much these days.

God kept a mystery secret for long ages and then He revealed it in Jesus. In His time, in His time.

Now to Him who is able to establish you
according to my gospel
and the preaching of Jesus Christ,
according to the revelation of the mystery
which has been kept secret for long ages past,
but now is manifested, and by the Scriptures
of the prophets, according to the commandment
of the eternal God, has been made known
to all the nations, leading to obedience of faith;
to the only wise God, through Jesus Christ,
be the glory forever. Amen.
Romans 16:25-27, NASB