A billboard prompted Ray and me to follow our noses — and our phone navigator — to the Pioneer Cafe in Sulphur Springs, Texas, on Monday. We weren’t there long before it began to dawn on us that this wasn’t the first time we had been lured to Sulphur Springs after seeing a billboard.

Three years ago we went there to see the first glass public bathrooms in the United States — on the public square, no less. That time I never got up the courage to go inside. This time I mustered up just enough to look inside one of them. It was clean and had all the usual plumbing. The only thing unique about it was that three walls are made of one-way mirrors. The user can see out but the public cannot see in — at least that’s the claim. I don’t intend to find out for myself.

If you look closely in the photo above, you can see reflections of the American flag and the beautiful courthouse.

Usually Ray and I admire courthouses from the exterior but on Monday, we decided to go inside. Ray sits on a bench near one of the courthouse’s two entrances.

In the center of the courthouse is this beautiful staircase, made not of wood as is typical in old courthouses, but of metal. The steps made a great sound as we went from floor to floor.

I was already intrigued by the metal staircase, but when I noticed that the ceiling was metal, too, I guessed that the folks who built this courthouse were taking extra precautions to protect it from fire.

Sure enough, I have since learned that the former courthouse burned in 1894. When construction began immediately on this one, the architect used fireproof materials.

The courthouse had many curved lines with round turrets and arches on the exterior and arches in the hallways, too. 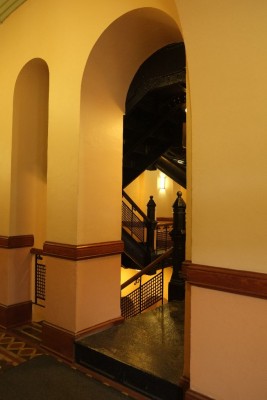 Even this safe along one of the hallways is topped with an arch.

Some of the doors in the courthouse had glass panes at the top with beautiful wood blinds covering them. We were able to go inside some rooms. The door into this room was locked, but we were able to peek beside the blinds to see that the room and its benches were also round. 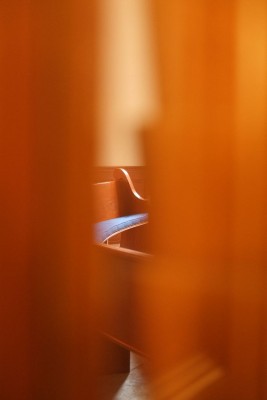 We saw this quilt celebrating the county’s sesquicentennial (1854-2004) as we made our way up and up. 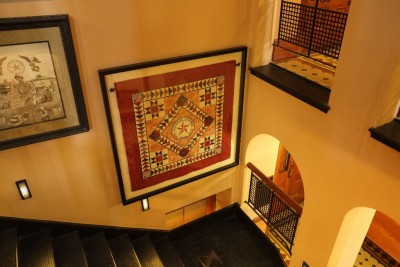 On the top floor, we saw yet another staircase. This one is a spiral and reaches . . . 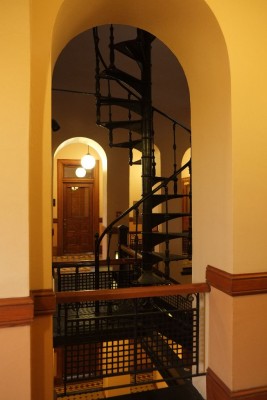 According to legend, architect J. Riely Gordon intended for the tower to have a clock that could be seen outside, but local authorities never appropriated the money. One of the county commissioners explained why they didn’t need a clock, saying, “Get up at sunup; go to bed at dark; and eat when you are hungry.”

The blinds of this room were open, revealing the heart of someone who worked inside or at least someone who decorated its walls. Notice the cross between a door and window.

I’m thankful that person is not ashamed of the gospel. That’s another key lesson to teach our children.

For I am not ashamed of the gospel,
for it is the power of God for salvation to everyone who believes . . .
Romans 1:16