When you live in a house built between the 1840s and the 1880s, you just never know what you are going to find inside, outside, under the house, or up the chimney! Ray and I had been married for decades before we ever saw a mouse in the house. We had caught maybe one or two in Cookeville, but, boy, oh, boy, all that changed when we moved to the country in 2004! We didn’t catch one or two mice — you could multiply those numbers by a dozen — every fall and winter!

We’ve also had birds fly out of the chimneys and skunks crawl under the house. Pee-yew! This summer some new critters decided to take their vacation under our house. First, we had a problem with our phone line. Then, we found out that our home security system was on the fritz. The problem with both was chewed wires under the house. The culprits were groundhogs.

We don’t get our house sprayed for bugs but we do have an underground termite system. Tennessee’s trees are beautiful in every season . . .

. . . but this many trees means termites. Once a year the termite inspector comes out, tells you all is well, and things are good for another year. When we learned about our groundhog visitors, we called our termite guys, the only critter guys we knew; but they told us that a new Tennessee law tells them that they can’t handle big critters like groundhogs. We would have to call a wild animal control specialist. That we did. What a blessing 1-800-VARMITS has been to us this summer. (I’m not joking — 1-800-VARMITS. Isn’t that cute?)

The first task was to set traps under the house and in the yard. They never actually caught anything but an opossum. Maybe our groundhog visitors were smart or maybe they got tired of our place and decided to find another B and B somewhere else. Though they never caught a groundhog, the guys at 1-800-VARMITS sealed our house from top to bottom. They sealed up around soffits and destroyed wasp nests. They put mortar between the stones of the chimneys (we’ve been wanting those chimneys re-mortared for years) and mortar between the holes of the foundation. I can’t wait until those little field mice try to get in this fall! They are going to find that the holes they thought meant “Welcome to Our House” for the last eleven years are shut tight.

1-800-VARMITS is a team of two. One is an older man who is the owner. He really knows his stuff and has great stories about what he has gotten out of people’s homes. You know, stories that make you go, “Yewwww!” He loves his job. Climbing onto the second story roof of an old house and repairing chimneys that are even taller would scare the socks off me. Mr. 1-800-VARMITS thinks it’s fun. He was actually very excited about our project. The other man is much younger, about 19, I guess — young enough to be the owner’s grandson, I’m guessing. The owner gave him high praise. I agree.

One of the fun things about having 1-800-VARMITS around was hearing about their work in other places. While they had our project on their agenda, they were also working on a church — a skunk had made its way into the ductwork! When the duo left our house on Wednesday, the owner said, “Gotta go get about 200 bats out of a house.” “Is someone living there?” I asked. “Oh, yeah,” he replied.

Our project has been ongoing for weeks and weeks, a day here and a day there. On Wednesday the duo came inside for the final task — cleaning out the chimneys. Okay, I’m really embarrassed to tell you this because, though we think it’s really cool, we also feel a bit shy about telling people how many fireplaces there are in our house. When we bought this place for a song in 2003, we knew it had four — three out in the open and one in a small closet. Then, when we were tearing out the cheapest-paneling-you-can-find-at-Lowe’s which covered the walls of every room upstairs, we were shocked to find four more fireplaces hiding behind the paneling — an upstairs fireplace above every downstairs fireplace. How else were you going to heat a big old house in the country in the 1800s? I’m telling you — this house is old. Even the kitchen was outdoors until the 1970s! Well, that many fireplaces takes a bunch of chimneys, two single ones and a double one to be exact. Outside, that looks like three chimneys; and so when we first moved into this drafty old place, we named our house “Three Chimneys” after the country cottage in The Railway Children by Edith Nesbit, another of my favorite children’s books, but I digress . . . .

We used propane logs in three fireplaces downstairs for several years, before we could finally afford central heat and air. Because of that, one single chimney and the double one had been swept. All 1-800-VARMITS found in those chimneys was spider webs. The story was quite different in the one in the living room which we had never had cleaned out. This is what they found in there: 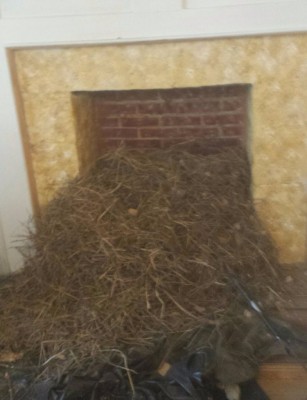 Years and years of the efforts of little birds or squirrels!

When I was a young mama, I used to struggle with looking around me and being jealous about what other families had that we didn’t have. Contentment can be a challenge, especially when you are young. Now I am heartbroken when I hear that another one of the families I envied has split asunder. We just never know what kind of holes are in a foundation or what is hiding in someone’s chimney, do we?

Make sure that your character is free from the love of money,
being content with what you have;
for He Himself has said, “I will never desert you, nor will I ever forsake you,”
so that we confidently say,
“The Lord is my helper, I will not be afraid.
What will man do to me?”
Hebrews 13:5-6