Last night was special in our little town of Gainesboro. In early November, the director of our local Chamber of Commerce asked me if I could pull together a live nativity for our first tree lighting on the courthouse square. The director found a stable and provided haybales, and last night homeschooled children, ages 1-12, wore costumes from our church as they portrayed Joseph, an angel, three shepherds, a camel, and two sheep. A public schooled child in our church’s Wednesday Bible class joyfully portrayed Mary. Her parents and big brother were so proud of her. I’ve known her since she was less than two years old, and I don’t remember seeing her any happier than she was last night.

Our live nativity sat quietly in the cold while: 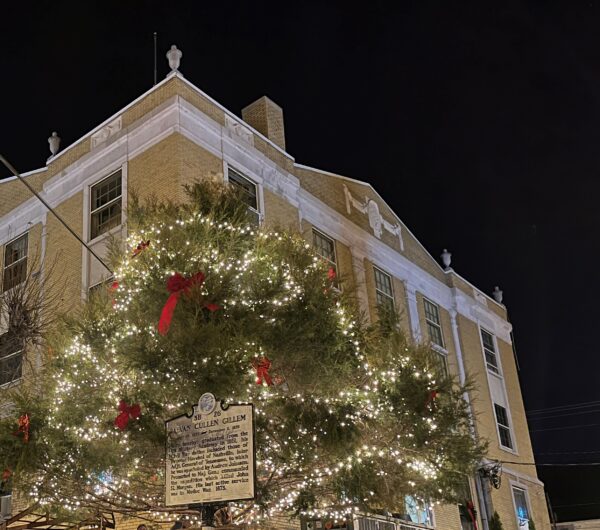 A group of last minute carolers waited at the bottom of the courthouse steps for their turn to sing. That group consisted of eight members of our church (Ray and me included), the sister of a member, the grandfather and the father of two of the shepherds, and the mother of the angel and the other shepherd.

On Wednesday morning during our ladies Bible class, I saw a text from the Chamber director. It read:

The second group of musicians backed out. If you were able to pull together some carolers, that would be fantastic.

My reply was: “I will see what I can do.” I made some phone calls. When the live nativity characters arrived to put on their costumes, the volunteer carolers gathered as well. We ran through “Joy to the World,” “Beautiful Star of Bethlehem,” and “Silent Night” twice. Ray stood in as makeshift director. Voilà! We were a singing group.

While the poem was being read, we carolers moseyed to the steps. We climbed them and formed a semi-circle. Ray lifted his hand, gave the downbeat, and we sang. It was fun. 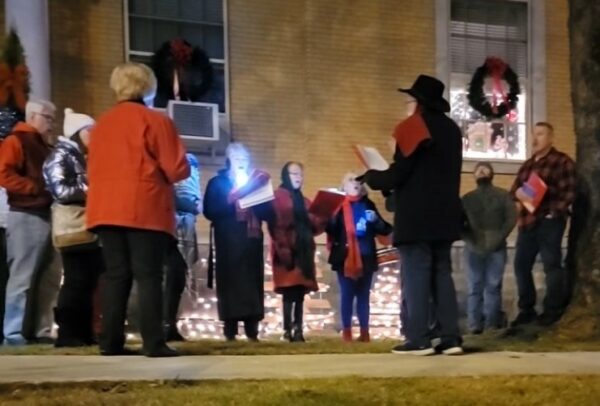 When we finished, the high school band played Christmas songs, and the mayor gave closing remarks. We gathered the children from the stable as the watching crowd dispersed and walked away joyfully. Participants and spectators alike were happy to have been a part of this historic occasion, our first Jackson County tree lighting on the square.

And an angel of the Lord suddenly stood before them,
and the glory of the Lord shone around them;
and they were terribly frightened.
But the angel said to them,
“Do not be afraid; for behold,
I bring you good news of great joy
which will be for all the people;
for today in the city of David
there has been born for you a Savior,
who is Christ the Lord.”
Luke 2:9-11