Ray is such a wonderful dictionary/concordance/encyclopedia. Yesterday, as I was thinking about what I wanted to share with you today, I asked him for a C. S. Lewis quote about the importance of knowing history. I didn’t remember a single word of the quote I wanted. I just knew that Lewis had said something wonderful about that topic. In no time, Ray was back with his paperback copy of The Weight of Glory and a slip of paper between pages 28 and 29. I was amazed—again! Here’s the quote. I encourage you to ponder it.

. . . we need intimate knowledge of the past. Not that the past has any magic about it, but because we cannot study the future, and yet need something to set against the present, to remind us that the basic assumptions have been quite different in different periods and that much which seems certain to the uneducated is merely temporary fashion. A man who has lived in many places is not likely to be deceived by the local errors of his native village; the scholar has lived in many times and is therefore in some degree immune from the great cataract of nonsense that pours from the press and the microphone of his own age.

The reason I wanted to share this concept from Lewis is that I continue to hear comments that cause me concern and make me sad. I was chatting with a friend recently. Her job is in health care. The job, as you can imagine, has been very stressful during the COVID pandemic. I asked her how things were going at work. She told me that she is looking forward to retirement and explained some of her reasons. She surprised me with an aspect of her work that she had not mentioned before. She is weary of the differences of opinion between older employees and younger ones. She said that younger employees assume that differences of opinion are based on age; in other words, they think that my friend and other older employees think the way they do simply because they are older. My friend said that her sister is experiencing the same attitudes in her work environment.

At Notgrass History, we are involved in a major building project. On Monday some of our team members met with the project manager from the construction company and one of the subcontractors. As we weighed the pros and cons of a decision, we discussed the fact that the owner of the construction company (who was not present at this meeting) had a different opinion than another person involved in the decision. When I asked why the owner felt the way he did, the subcontractor explained that it was because he was “old school.” Here we go again.

These recent experiences reminded me of an anecdote that I shared with you last September in my post, “Give Your Children the Gift of the Past and of Those Who Have Lived It.” I even shared the same C. S. Lewis quote in that post, too.

When Paul wrote to the young preacher Timothy, he told him:

Let no one look down on your youthfulness,
but rather in speech, conduct, love, faith, and purity,
show yourself an example of those who believe.
1 Timothy 4:12

Likewise, he wrote to the young preacher Titus, saying:

. . . in all things show yourself to be an example of good deeds,
with purity in doctrine, dignified,
sound in speech which is beyond reproach,
so that the opponent will be put to shame,
having nothing bad to say about us.
Titus 2:7-8

However, Paul also told Titus about a special role for older women. They were to teach what is good:

. . . so that they may encourage the young women
to love their husbands, to love their children,
to be sensible, pure, workers at home,
kind, being subject to their own husbands,
so that the word of God will not be dishonored.
Titus 2:4-5

There is a time for older people to teach and for younger people to listen. I think that the C. S. Lewis quote sheds some light on why that is true. People who have lived longer have an “intimate knowledge of the past.” As Lewis said, that is not because the past has any magic about it. Older people have “something to set against the present.” They can “remind us that the basic assumptions have been quite different” in the past. Older people who have learned well from the past have some degree of immunity “from the great cataract of nonsense that pours from the press and the microphone of” the present age. To be sure, not all older people have learned well from the past, but many have. When younger people learn from those who have learned well, they too can develop that much-needed immunity that Lewis mentioned.

Older people must follow young examples of good deeds, purity in doctrine, dignity, and soundness of speech. I also believe more older people need to do more teaching. They need, of course, younger people who are willing to learn, young people who don’t dismiss their ideas as “old school,” but who respect the godly wisdom they have. As all homeschooling mothers know, teachers and learners must work together. Learners need teachers; teachers need learners.

Respect for older people is something that God cares about. Paul told Timothy:

Timothy had a role in teaching those who were older and younger. He had a particular way he was to carry that out. He was to treat them like family. The Bible is clear again and again about how everyone should treat their parents. It seems to me, from the teaching in 1 Timothy 5, that this should be our pattern in all interactions between the generations. It is a great example to your children, too. It trains them in how God expects them to treat you.

Honor your father and your mother,
so that your days may be prolonged on the land
which the Lord your God gives you.
Exodus 20:12

In a recent conversation with other empty-nest parents, the father hypothesized about why many young adults don’t seek the wisdom of their parents. He said that in an age when they feel that they can Google any information they need, they don’t think they need to hear what their parents would say. There is a great deal of information online for sure, but we must all be careful about what pours from that “microphone” of our own age. Some of it is a “great cataract of nonsense.” However, as helpful as some of it is, it doesn’t come close to being a substitute for the godly wisdom of parents who have loved and sought the best for their children since before they were born.

I like the illustration I used back in September so much that I am using it again today.

Listen to your father, who fathered you,
And do not despise your mother when she is old.
Proverbs 23:22

Let your father and your mother be glad,
And let her rejoice who gave birth to you.
Proverbs 23:25 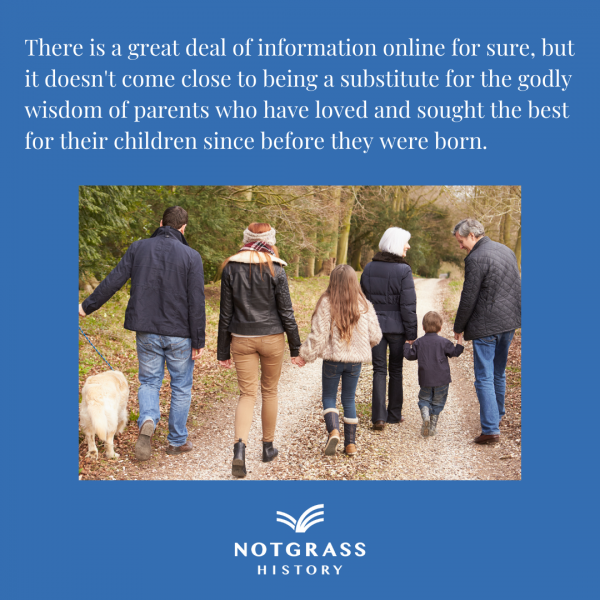