My family got our first telephone when we moved into town when I was four years old. It was a black table model with a rotary dial. We rented it from the telephone company, just like everybody else. If we called someone and the phone rang and rang and no one answered, you knew they were not at home. If they were talking on the phone, you heard a different sound called a busy signal.

People who didn’t want to talk sometimes took their phone receiver “off the hook” so that people would get a busy signal and think they were already talking to someone else. “Off the hook” is a weird expression. It probably came into use when the earpiece of a big wooden wall phone hung on an actual hook. In the fifties and sixties, “off the hook” meant that the receiver was not resting on the phone where it belonged, but on a table. I remember the fear I felt when we got a late night call. It usually meant that someone was very sick and on the way to the hospital. Our family never ignored a phone call or left the phone off the hook. Phone calls involved people and people were important.

While we were at the California state homeschooling convention in 2013, I got a phone call just fifteen minutes before the convention ended on Saturday night. I looked at the phone and saw the number. It was my mother. We talked every day, but it was rare for her to call me. She usually waited for me to call her. I answered the phone and heard two unintelligible syllables and then the call was lost. I knew immediately that my mother was in trouble. I felt confident that she was in the midst of a stroke. I called my brother and a friend, both of whom live near her. I also called her local emergency number (a number I kept in my purse for such a time as this). An ambulance took her to the hospital in Nashville.

Since I was far, far away in California, I wondered what I should do. On Sunday one of her doctors assured me that Mother would improve and that I did not need to rush home, but he said some sobering words: “Your mother may talk again and she may not.” I thought: “I’ll hold on to the ‘may,’ because this is Mother.” I had seen Mother’s courageous determination many times.

I took the advice of two different doctors and made the difficult decision to remain out West to do the Colorado homeschool convention the following weekend and to travel home with Ray and Mary Evelyn’s family as originally planned. I felt ripped in two.

While I was gone, Mother spent four days in the hospital and a week in rehab. My brother and niece were wonderful and took great care of her. She was released from rehab the day after we returned home. We brought her home with us. She worked hard in home health therapy. You can imagine my joy when she falteringly told the speech therapist, “I want to learn to speak.” Mother did learn to speak but never in the way she had before. She was able to return to her home for several months, but then needed to move in with us permanently until her death in 2020. 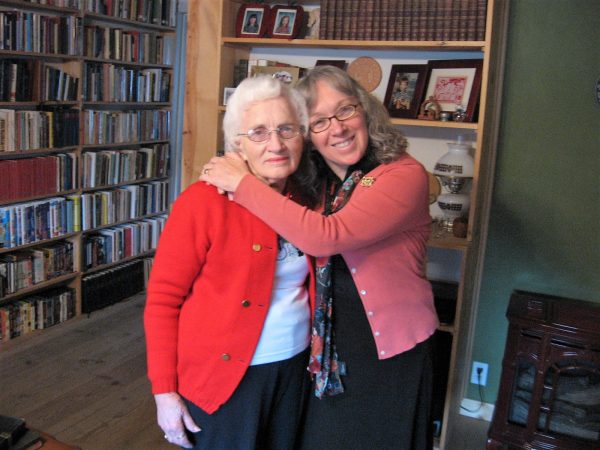 Not long after Mother’s stroke, my cell phone rang while I was in a meeting. Others in the meeting wondered why I didn’t ignore it. I think you know why I didn’t.

Mother’s call to me in California that night was her only link to help from another person. She tried to make other calls but no one could hear her say anything and they didn’t realize it was she. I’m glad I heard my phone. I’m glad I answered it.

I admit now years later that I ignore calls from numbers I don’t recognize. On a few rare occasions, I don’t answer a call immediately, but I am probably one of the most consistent phone answerers among my friends and family. My experience has told me that whether to answer a call is a very important decision—sometimes a lifesaving one.

I’m glad God answers when I call on Him.

In the day of my trouble
I shall call upon You,
For You will answer me.
Psalm 86:7