When I was in elementary school, we looked forward to the times when entertainers visited our school through a program called Southern Assemblies. Teachers collected a quarter from each child who wanted to attend. At the scheduled time, we got into our straight lines, walked into the gymnasium, and filed into the bleachers or into rows of folding chairs on the gym floor. There on the stage where I had my acting debut in first grade while playing a rose in an operetta, entertainers thrilled a gym filled with elementary kids. Three Southern Assemblies stand out in my memory.

One time our entertainer was a hypnotist. Can you imagine schools allowing someone to hypnotize children? Our elementary school included grades 1 through 8. Only eighth graders were allowed on stage to be hypnotized. Whew! I’m glad I was too young.

Another time our entertainer was an artist who drew big pictures really fast with chalk. For the rest of my elementary school days, his chalk drawings hung on the wall of our cafeteria.

My favorite Southern Assembly ever was the whistler! Visiting our little elementary school in our little town was the actual whistler who whistled the theme song of The Andy Griffith Show! Wow! I was impressed!

I was six years old when The Andy Griffith Show began in 1960. Today I wish Andy and Barney hadn’t spent so much time hugging and kissing on Helen and Thelma Lou, but, aside from that and a few other moral issues,  I still like The Andy Griffith Show. Except for the occasional documentary, Ray and I watched basically zero television until Mother came to stay with us in June, but Mother really likes to watch Andy Griffith. Because of that, we have subscribed to Netflix so that every night Mother and I (and sometimes Ray) can enjoy the exploits of Andy, Barney, Aunt Bea, Opie, and their neighbors.

Today we had no events scheduled for our Homeschool Without Fear tour through North Carolina, so we drove up to Mt. Airy to explore the town where Andy Griffith grew up. Along the way, we saw Pilot Mountain, which is likely the inspiration for the TV show’s town of Mount Pilot.

Mt. Airy entrepreneurs have found many ways to immortalize their hometown’s favorite son. We saw signs for Mayberry Auto Sales and the Mayberry Insurance Agency. Of course, there were Mayberry gift shops. Some sites were authentic like Andy’s childhood home, where you can pay to spend the night.

An attendant at the Mt. Airy Visitor Center told us that the barber at Floyd’s City Barber Shop cut Andy’s hair. The barber is only 89 years old. Since Andy Griffth died at 86 years old in 2012, the barber must have cut Andy’s hair sometime after he grew up. 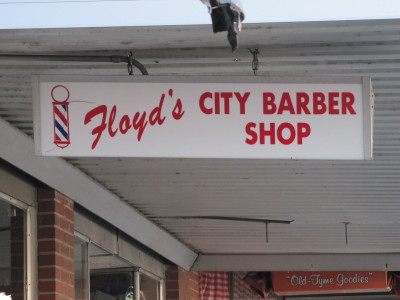 A complex a short distance from downtown had reconstructions of several buildings from the television series. You can go to “Wally’s Service Station” and catch a tour of Mt. Airy in a squad car. We decided the $35 price tag for a 30 minute tour was too steep for our budget.

Our favorite stop was the Andy Griffith Museum. Here we are beside the statues erected by TV Land.

Inside was this cut out of Goober.

This museum owes its existence to the forethought of Emmett Forrest, who became friends with Andy Griffith when Andy was nine years old. They remained friends throughout their lives. Andy died in 2012 and Mr. Forrest in 2013. Forrest served as the benefactor and the founding curator of the museum which honors his lifelong friend. Another important museum supporter was Betty Lynn, who played Barney’s girlfriend Thelma Lou.

Today we saw clothing that actors wore on the TV show: Andy’s shirt and badge, Barney’s black and white tweed suit, and Goober’s brown striped one. Actor George Lindsey who played Goober donated the strange hat that he wore with his mechanic get-up. He had had it bronzed and attached to a wooden plaque! Lindsey wrote that he cut the holes in the hat himself and that the style was the type he had seen mechanics wear when he worked in his Aunt Ethel’s garage when he was young.

A special treat was seeing the chair that Barney used when he and Andy sat in the sheriff’s office. When actor Don Knotts left the show after five seasons, the chair was bronzed for him and 72 members of the cast and crew signed it. Mr. Knotts liked the chair so much that he sat in it at home–even though it was bronzed! It was fun to see the Sheriff and Justice of the Peace plaques that hung on the doors of the Mayberry courthouse. Perhaps the most exciting artifact of all was the ring of jailhouse keys–the ones that usually hung on a nail within reach of whatever prisoner was occupying the Mayberry jail.

As much as I enjoyed seeing these artifacts and many more, the most exciting thing about the museum was the information about Andy Griffith, the person. On display was the beautiful rocking chair his father made for his mother while she was expecting Andy, their only child. After he became a successful actor, Andy moved his parents from Mt. Airy to California. When he came to Mt. Airy to help arrange their move, he gave the chair to a relative who later donated it to the museum.

When Andy Griffith was eighteen years old, he entered the University of North Carolina, becoming the first person on either side of his family to attend college. He intended to become a Moravian minister, but later switched to music. During college, Andy sang in the choir of a local church. For one year, he worked as a youth choir director. Andy Griffith had no idea how to be a good student at first, but he stuck it out at UNC, and after five school years and two summers, he graduated, by the skin of his teeth. After Andy established a successful career, he and his wife third wife Cindi established the Andy and Cindi Griffith Scholarship in the departments of dramatic art and music.

Earlier this week, we visited the Lost Colony of Roanoke. During our trip, we have learned about The Lost Colony play. This outdoor drama has been performed there each summer for 76 years. Andy Griffith began acting in that play while he was still at UNC. He began as Soldier #1, but eventually played the lead role of Sir Walter Raleigh for several seasons before he began acting on Broadway, on television, and in Hollywood.

Andy Griffith visited his hometown many times during his long career. In the museum are several notes that he gave to his friend Emmett Forrest, explaining various artifacts and showing appreciation for Mr. Forrest’s work. One of the most touching items in the museum was a photograph taken when Mt. Airy’s Andy Griffith Parkway was dedicated in 2002. During a prayer, Andy and Cindi sat holding hands with their heads bowed. They appeared to be so genuine. They looked as if they were in a position to which they were accustomed.

Late in life, Griffith returned to his musical roots. At age 70, he recorded a collection of hymns, titled I Love to Tell the Story. He won a Grammy for the album.

Griffith loved the Outer Banks of North Carolina, where he had performed in The Lost Colony as a young man. He made his home there for many years and there he died in 2012. When he died, Cindi to whom he was married for 28 years gave this statement:

“Andy was a person of incredibly strong Christian faith and was prepared for the day he would be called Home to his Lord. He is the love of my life, my constant companion, my partner, and my best friend. I cannot imagine life without Andy, but I take comfort and strength in God’s Grace and in the knowledge that Andy is at peace and with God.”

My purpose is not to exalt Andy Griffith or to hold him up as a perfect example. I just wanted to share with you stories of a man created in the image of God. Andy Griffith was a fallible human being like us all. On television, Andy Griffith created the character of Sheriff Andy Taylor who made us smile and taught us important lessons. In his real life, Andy did some very sweet things and I enjoyed learning about those in our day in Mt. Airy.

What is desirable in a man is his kindness.
Psalm 19:22a, NASB