First, I want to thank Joanie and Cathy for identifying this painting.

While writing “We Don’t Need to Be Afraid” for yesterday, I found other incidents in the gospels when people heard the same comforting words that the shepherds heard: Do not be afraid.

When the angel came to Mary to tell her she would give birth to Jesus, he told her: “Do not be afraid.” She was seeing an angel. She was about to find out she was going to be pregnant and she wasn’t married. Still, she had no reason to be afraid.

After Joseph learned that Mary was going to have a baby, he decided to break the engagement secretly; but an angel visited Joseph and told him not to be afraid to take Mary as his wife.

When Jesus and the disciples experienced a storm on the Sea of Galilee, Jesus told them: “Do not be afraid.”

While Jairus was waiting for Jesus to come and heal his daughter, messengers came to tell him that his daughter had died. Jesus told him: “Do not be afraid.”

Faith is the antidote to fear. We see the word “Believe” on T-shirts and many decorative objects this time of year. Sometimes I’m not exactly sure what those items are encouraging us to believe in, but I know what Jesus wants us to believe.

Jesus said to [Lazarus’ sister Mary],
“I am the resurrection and the life;
the one who believes in Me will live, even if he dies,
and everyone who lives and believes in Me
will never die. Do you believe this?”
She said to Him, “Yes, Lord;
I have come to believe that You are the Christ,
the Son of God,
and He who comes into the world.”
John 11:25-27

Several years ago, our daughter went on a mission trip to Belize and brought me home a pottery Nativity. Since then I have looked for Nativity sets from various parts of the world. I have found them at fair trade shops, craft fairs, and gift shops from Michigan to Texas to Tennessee. Here are most of them.

As we celebrate the birth of Jesus, let’s remember why He came:

I have come as Light into the world,
so that no one who believes in Me
will remain in darkness.
John 12:46

And let’s do what Jesus told Jairus to do. 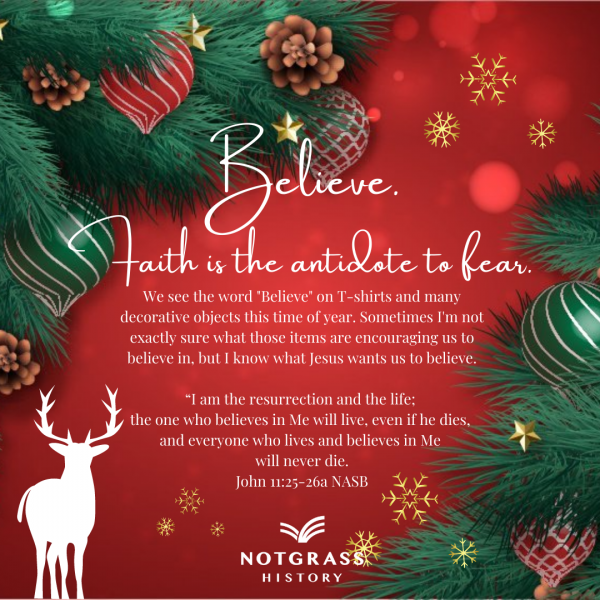