Ray and I always enjoy the little towns of southern Illinois when we drive home after visiting our son and his family in Missouri. Ray and I grew up watching Popeye cartoons in the 1960s, so we sometimes stop at the Popeye gift shop in Chester. Chester is the hometown of E. C. Segar, who created Popeye. 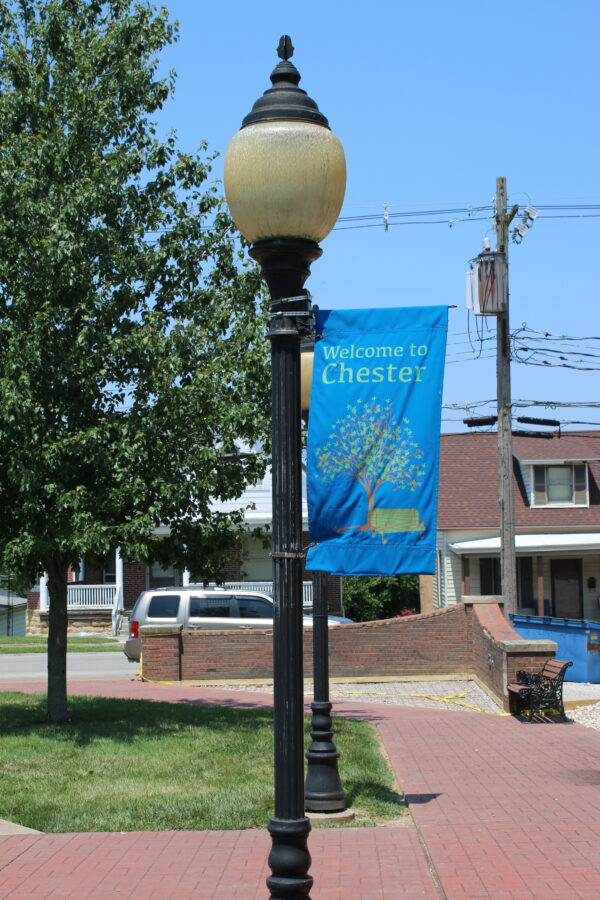 Statues and images of the Popeye the Sailor Man decorate the town, including:

This mural of the strong Popeye on the right and his girlfriend, Olive Oil . . . 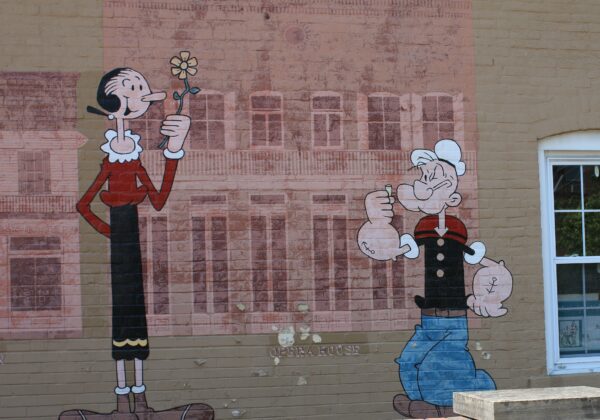 . . . this statue of their hamburger-eating friend, Wimpy. 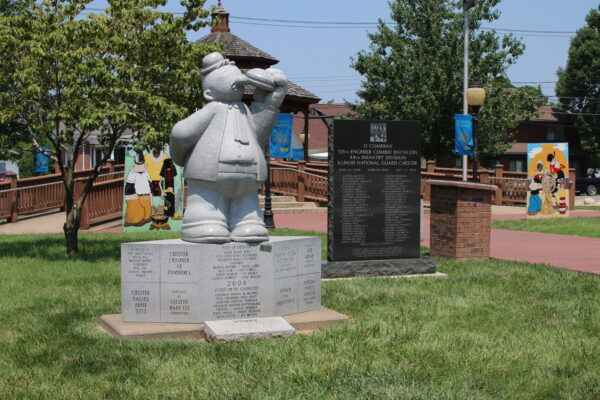 When we stopped in Chester last summer, we took those pictures and asked a fellow tourist to take Ray and me as the loving couple. 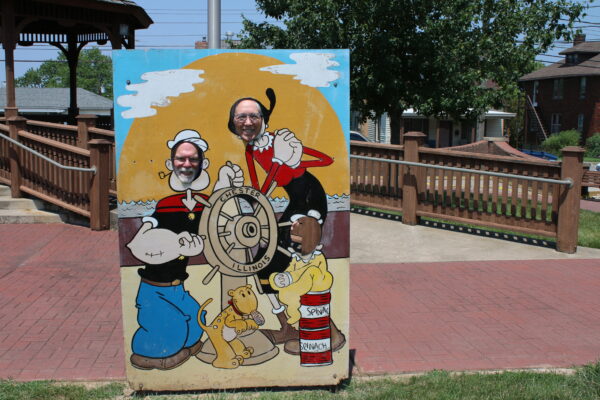 Last week it was lunchtime when we got to Chester. We drove on past the gift shop and adjacent park with these images and statue above and were soon following the directions on my phone to St. Nicholas Landmark, a restaurant I found in my search for restaurants in Chester. The directions were some of those mystifying ones. I’m surprised that we actually stuck with the quest with all of the turn left . . . turn right . . . turn left commands that took us up and down residential streets in a seemingly hopeless path. However, we finally came to the edge of the bluff along the Mississippi River and began to descend quickly to the rather narrow strip of land beside the mighty river.

When we saw utility trucks parked in the lot beside the restaurant, I felt confident we had found a great place to eat, figuring that those utility workers knew exactly where to eat. Our first surprise was actually finding a restaurant when we got to the end of the directions. Our second surprise was the huge brick building that appeared to have once been a warehouse. Our third surprise was the water wheel near the entrance . . . 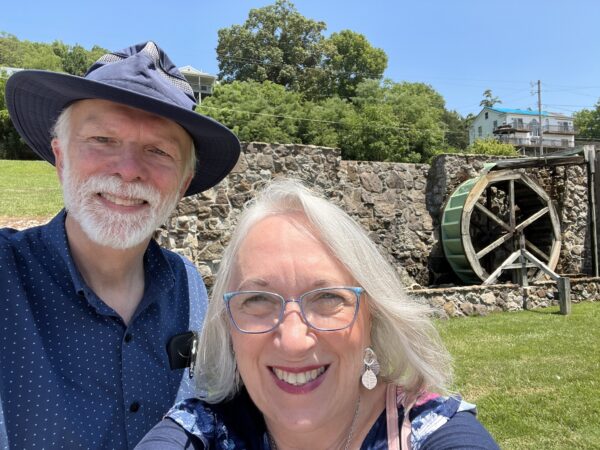 . . . and the historic marker that explained it. 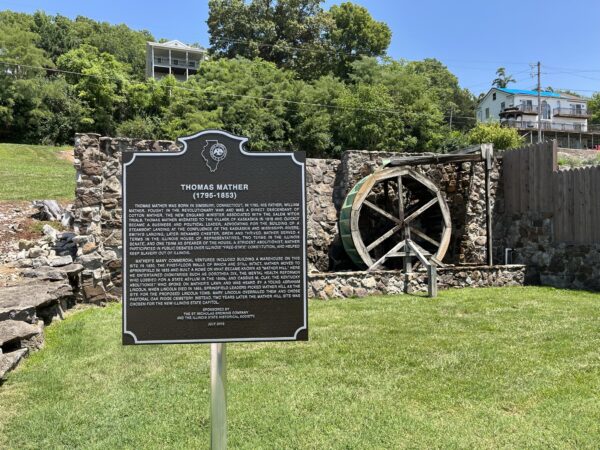 Thomas Mather was instrumental in the founding of Smith’s Landing, which later was renamed Chester. Mather was a member of the Illinois state legislature for several terms and was an enthusiastic abolitionist. He was instrumental in building the warehouse that was later added on to and much later became the restaurant where Ray and I were about to enjoy lunch. Thomas Mather later moved to Springfield, Illinois, and built a home on what came to be called Mather Hill. According to the sign, a young Abraham Lincoln once listened to an abolitionist speech on the lawn of Mather’s home. In 1867, two years after Lincoln’s death, the Illinois State Capitol was constructed on Mather Hill.

The interior of St. Nicholas Landmark is striking. We were blessed to have its manager as our waitress. She told us about the building’s history and encouraged us to look around. We did so as we waited for our delicious lunch. We enjoyed the stained glass window beside our table . . . 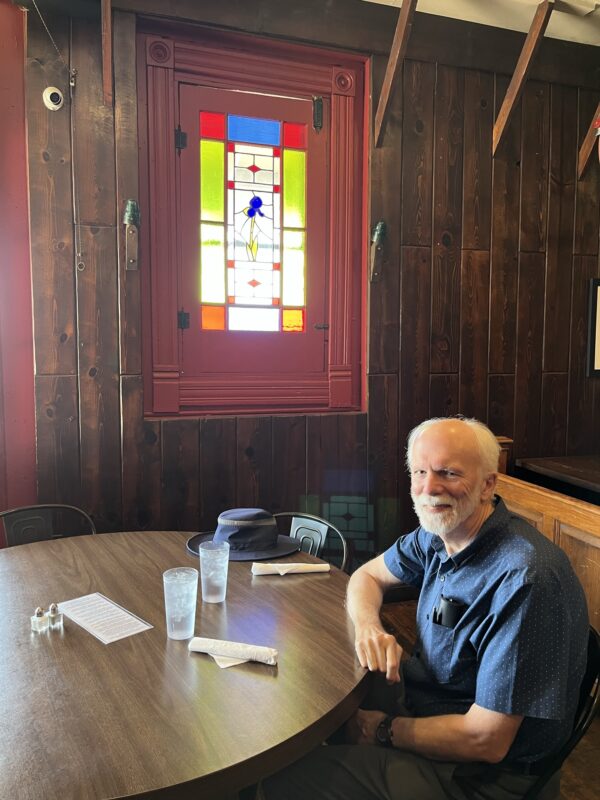 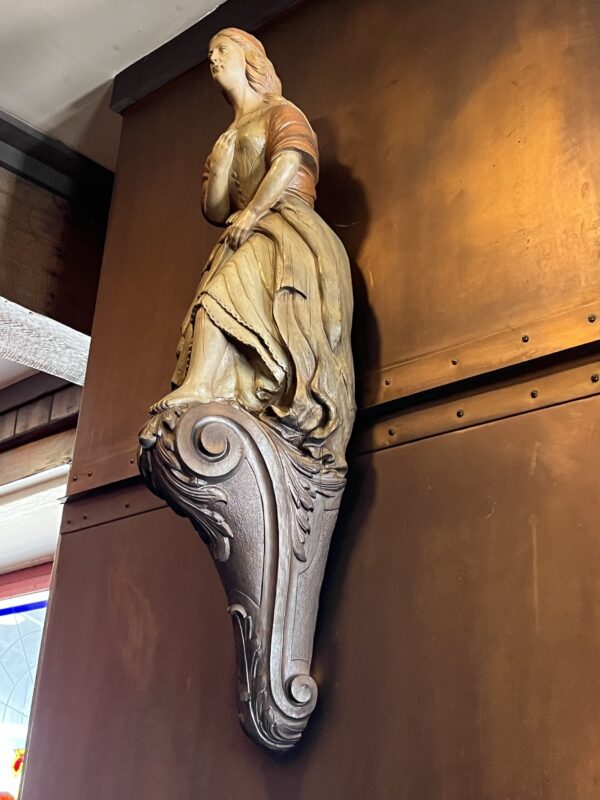 . . . the antique glass insulators which decorated many of the building’s beams, . . . 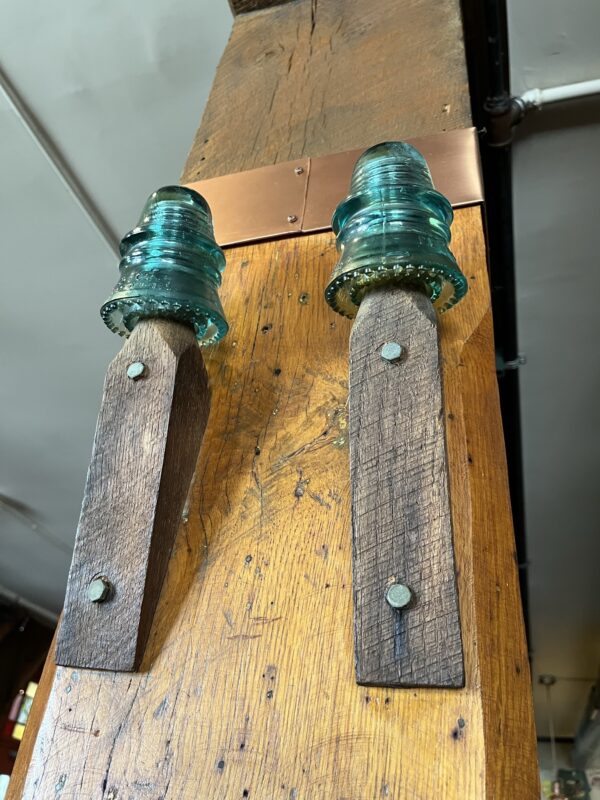 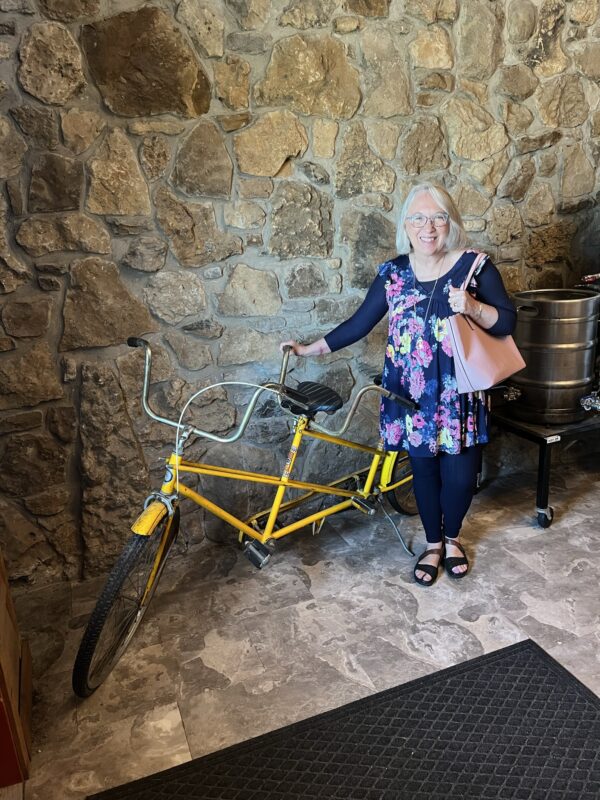 . . . and the stained glass decoration beside the front stairway. 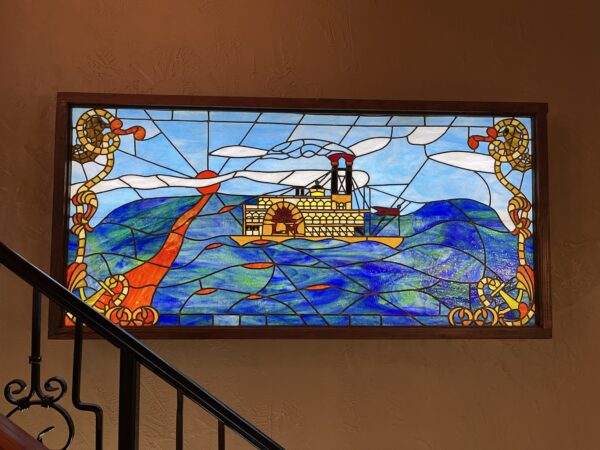 While we enjoyed our yummy sandwiches and homemade house chips, we had three special surprises. A barge sped down the Mississippi River outside our window. 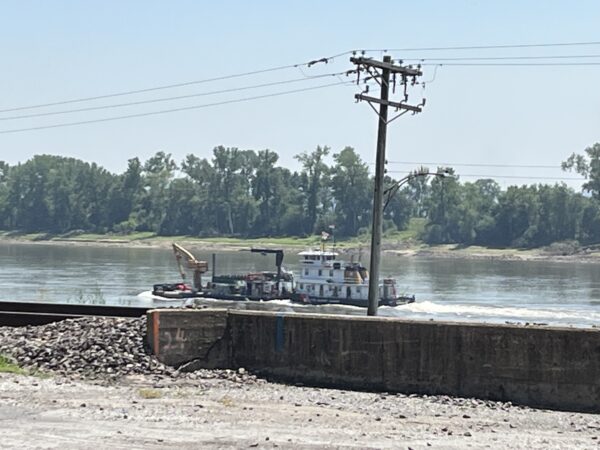 Soon a long train filled with car after car of coal sped along the railroad tracks between us and the river. 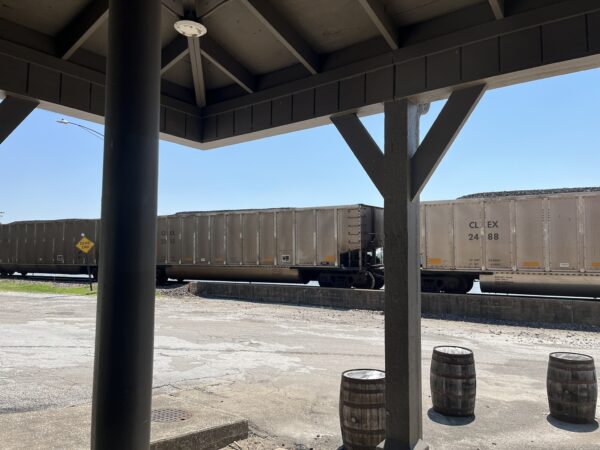 Then to our great surprise, the manager told us to save room for dessert which they give free to first timers. 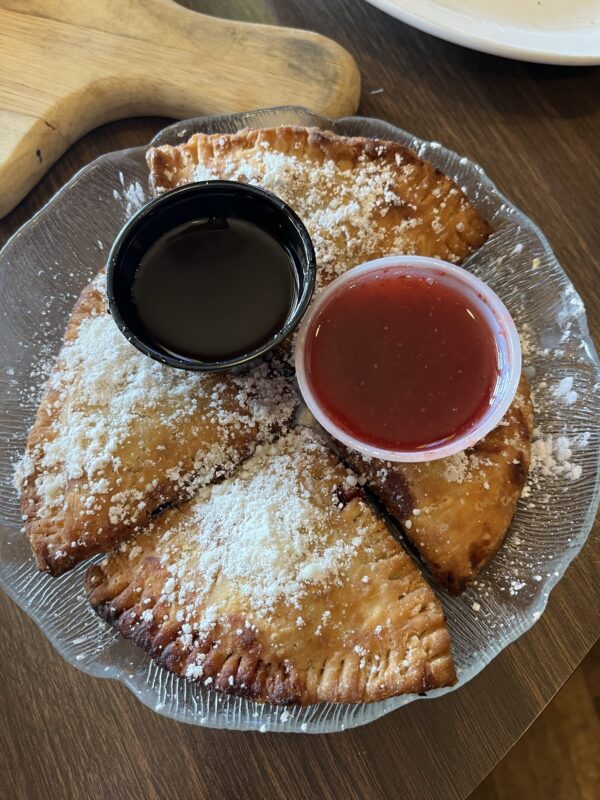 Yes, those four fried pies, filled with fruit, topped with powdered sugar, and dipped in strawberry sauce and chocolate sauce were as scrumptious as they look.

Needless to say, we left St. Nicholas Landmark amply supplied. Before heading south to Tennessee, we walked over to the river and took more pictures of the railroad track and the Mighty Mississippi.

Ray and I were grateful for all of the pleasant surprises that awaited us at the end of our uncertain drive to an unknown location, recommended only by a search on Google. All of us get up every day and walk through that day with its surprises. Sometimes those surprises are pleasant like those were; sometimes they are not so pleasant. Either way Jesus understands (from personal experience) and He walks through them with us. You are also getting to walk through them with your children. What a blessing that is, too.

Make me walk in the path of Your commandments,
For I delight in it.
Psalm 119:35