Later this morning, Ray and I are off to an eye center for Ray to have the first of his two cornea polishings—one today and one next Tuesday. According to his trusted ophthalmologist, this is an essential first step for him before he can have cataract surgery in eight to ten weeks. This polishing surgery is a complete surprise to us. We got the surprise last Thursday when we went to the ophthalmologist for Ray’s first appointment in preparation for cataract surgery. It turns out that the ophthalmologist can’t get a good computer image of Ray’s eyes until some small lesions get polished off. Bad computer imaging would mean an inaccurate reading of what type of lens he will need when he gets the cataract removed. I would cherish your prayers that what is supposed to be a fairly simple process turns out to be just that.

Yesterday morning Ray came into my office from his to tell me about the phone call he had just received. An obviously southern woman from the eye center had called to talk to him about his upcoming procedure: “She called me Sweetie and Sweetheart,” he said, “but I assure you I’ve never seen her.” He’s so cute!

We were amused. Though it doesn’t happen often, we are rarely surprised when a waitress or a worker in an office calls us Sweetie and Sweetheart. It’s a southern thing. As Ray got to the door of my office after his phone report yesterday, I asked if he thought she used those terms because we are older. “I don’t think she would have used them for someone who was 30,” he said.

Everyone deserves to be called Sweetie and Sweetheart by their mamas and daddies and aunts and uncles and grandparents. One nice thing about growing older is that we get to be called those names again, even by people we have just met.

While my Sweetie and I head to the eye center today, I pray that you, tender and gentle mother, have a happy and affectionate day as you share life with your own dear Sweeties and Sweethearts.

But we proved to be gentle among you.
As a nursing mother tenderly cares for her own children,
in the same way we had a fond affection for you
and were delighted to share with you
not only the gospel of God,
but also our own lives,
because you had become very dear to us.
1 Thessalonians 2:7-8 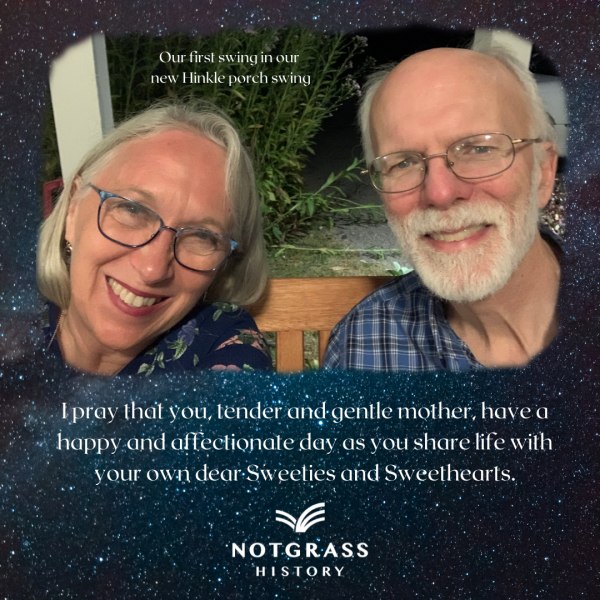