As we traveled between San Angelo and Austin, Texas, last Tuesday, Ray was excited to see on our atlas that we would be passing close by the LBJ Ranch at Stonewall, Texas. Anyone paying attention to the news in the 1960s knew immediately who LBJ was; but for those of you too young to know, LBJ was President Lyndon Baines Johnson. Not only was LBJ always in the news, so was his ranch.

Johnson served as vice president during the administration of President John F. Kennedy. After the assassination of President Kennedy on November 22, 1963, President Johnson took the oath of office on Air Force One while it sat on the tarmac at Love Field in Dallas, Texas. Johnson ran for his own four-year term as president in 1964, won that election,  and served until 1969. 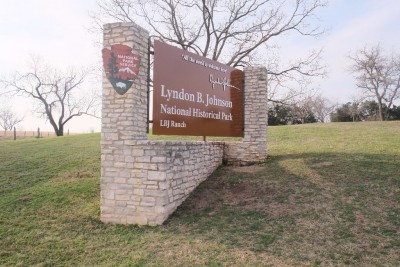 By the gate is the one-room schoolhouse where Johnson began school at age four.

The LBJ Ranch continues to be a working ranch.

The Hereford cattle there are descendants of the president’s own cattle.

The LBJ Ranch is in the beautiful Texas Hill Country and lies along the Pedernales River.

This low water crossing is the original entrance to the ranch.

We arrived too late to drive into the ranch, but we could see a complex of buildings in the distance across the Pedernales River.

If we had arrived in time, we could have seen the reconstructed birthplace of Lyndon Johnson. Johnson himself had it rebuilt in 1964. It is the only presidential birthplace to be rebuilt by a president while he was in office. I took the photos above, but these last two photos are courtesy of the National Park Service.

We could have also seen the Johnson home, nicknamed the “Texas White House.”

Lyndon Baines Johnson was born on the ranch in 1908 and grew up there. He and his wife, known as Lady Bird, moved back to the ranch after he left the presidency in 1969. Five years later, on January 22, 1973, Johnson suffered a fatal heart attack in his bedroom in the Texas White House. Johnson had long made it clear that he wanted to buried in the family cemetery on the ranch, along with generations of his family going back to his great-grandmother.

During the five years that President Johnson served as the thirty-sixth president, he returned to the Texas White House seventy-four times. He made major decisions here and held staff meetings and press conferences on the front lawn of his home.

Lyndon Johnson had the gift of a place to call home, and that place had deep meaning for him. Whether you live on a ranch or in an apartment, whether your family has lived in your home for five weeks or for five generations, you are providing a place to call home for your children. That is a precious gift that takes much work and sacrifice on your part. I’m so proud of you for doing that.

God understands our longing for home. That is why Jesus promised:

In My Father’s house are many dwelling places;
if it were not so, I would have told you;
for I go to prepare a place for you.
John 14:2