Yesterday morning I asked the teacher of our ladies Bible class if I could have a few minutes to tell about Ray’s and my experience at the state capitol on Tuesday. I know from past classes that many of these ladies get discouraged by what they hear on television news. I wanted them to know that television news does not tell the whole story. On Tuesday people praised God and called other people to follow Jesus inside the chamber of the Tennessee house of representatives, and two of the people who did that were elected officials. I’m thankful to get to share that with you, too.

When I wrote yesterday’s report about Rally Day, I didn’t have this photo of Ray and me during our presentation. Here we are in one of those joyous moments. 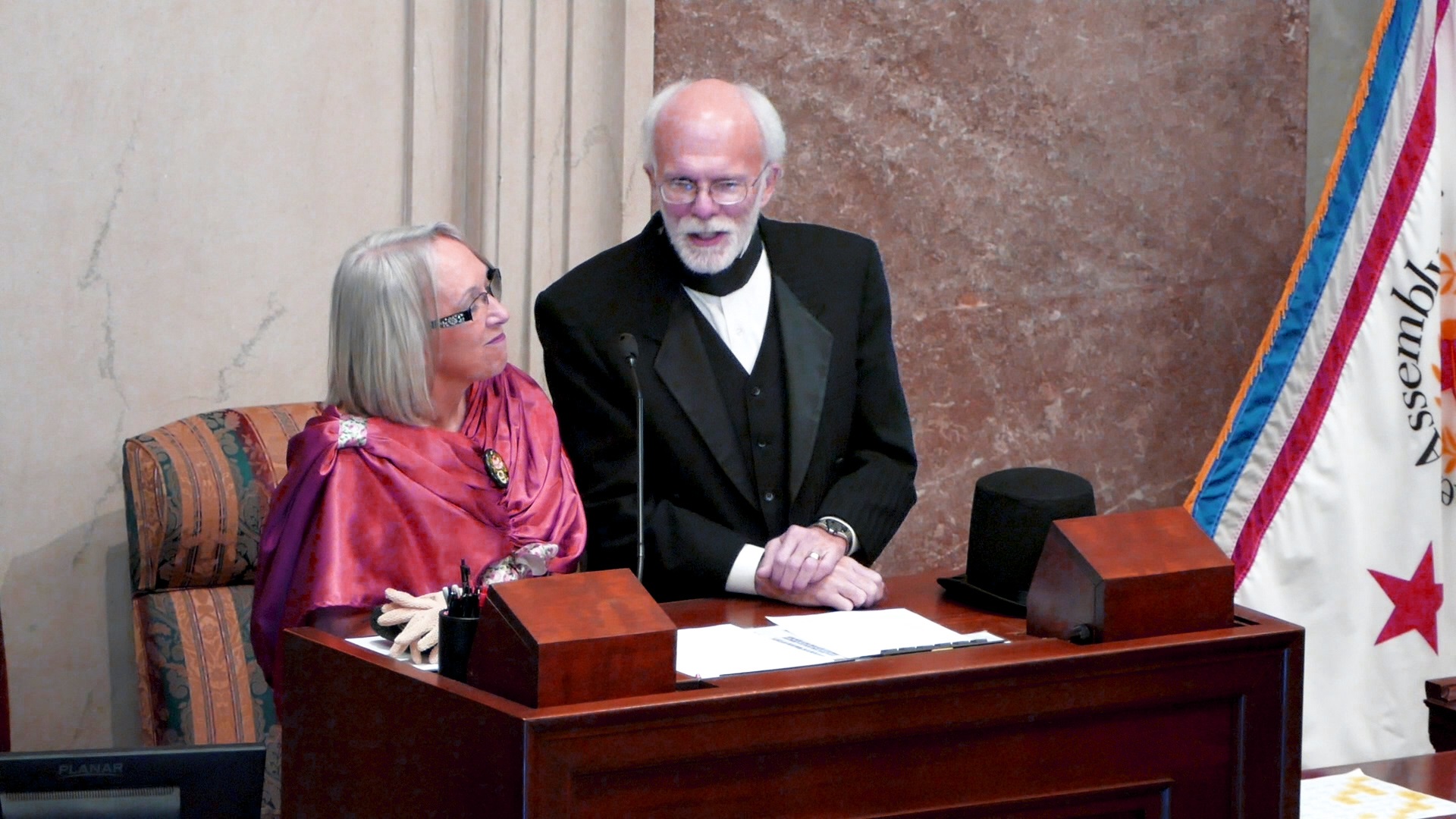 Right after going through security at the entrance to the Cordell Hull legislative office building (in our fancy getups — that was an experience!), we saw our representative, John Mark Windle, in the foyer. We introduced ourselves and he surprised us by asking, “Can I take you to lunch?”

Wow! That was much better than the “Hello, Mr. Windle. We appreciate what you do for us. We want you to know that we live in your district and publish history for homeschoolers. Thank you. Goodbye” sort of conversation we had expected to have with him when we stopped by his office.

He let us store our video equipment and other materials in his office before going out to lunch. We snapped this selfie by his office entrance, while we waited for him to do one quick errand before we left. 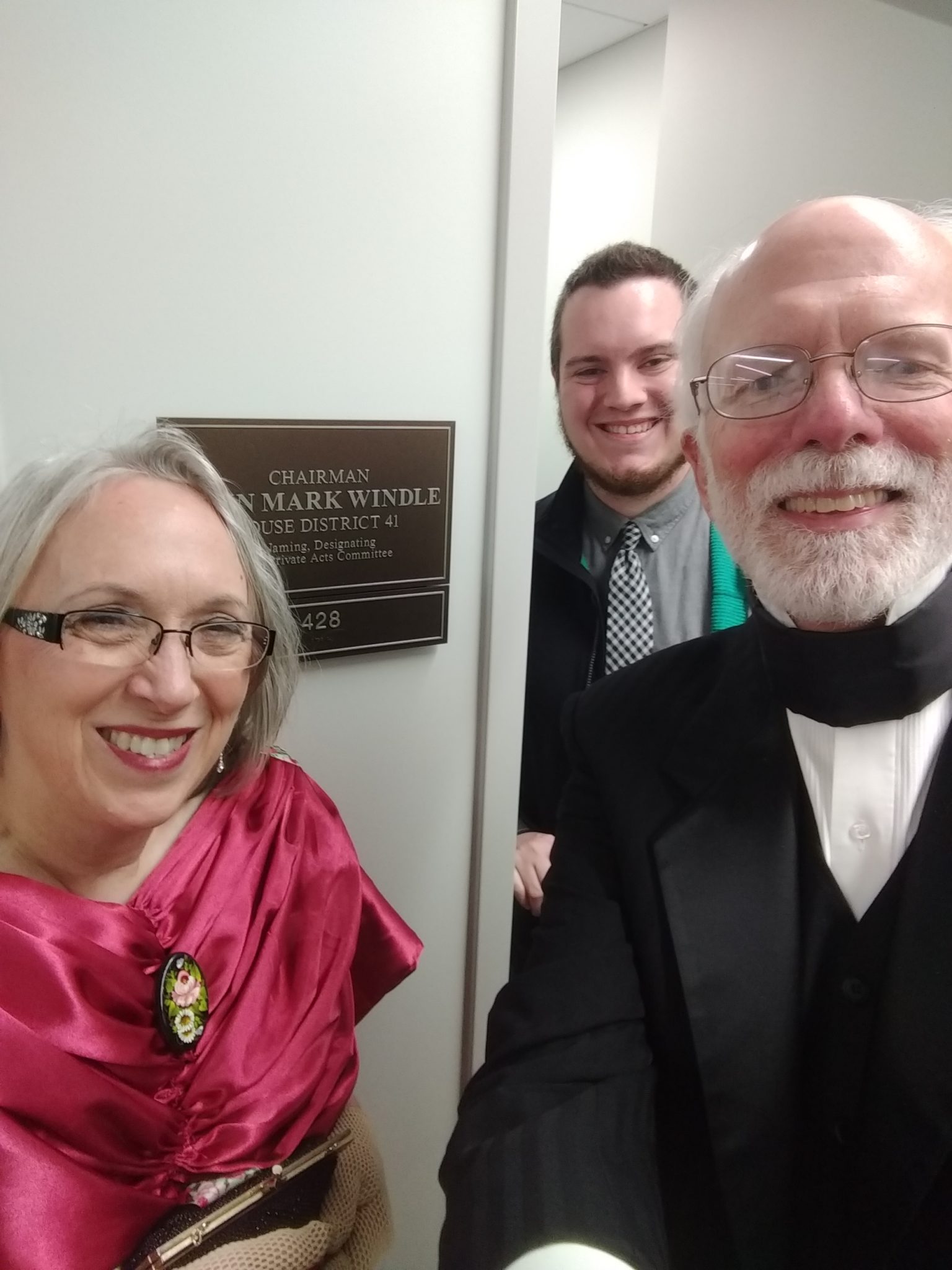 When he returned, we scurried out into the bustling Nashville streets and walked a few blocks away to the Frothy Monkey. All along the way, Representative Windle asked us questions to learn the story of Notgrass History.

I told Ray the next day that we now know what it means to “turn heads.” It is quite an experience to keep up with a quick-walking representative through city streets and into a trendy downtown breakfast and lunch shop — in 1845 formal wear!

The conversation continued at our table. When our server brought our food, Mr. Windle offered for Ray to say a prayer. Somewhere between the foyer, the restaurant, and back to the office building, he invited us to go with him to his committee meeting in the afternoon and asked if we would give the committee a reprise of our morning presentation. We quickly agreed! What an opportunity!

In the committee room, Mr. Windle began the meeting and called for a personal privilege. Then he asked “President Polk” if he would say a prayer and he did!

We enjoyed listening to our representative government in action, and then Mr. Windle called “President and Mrs. Polk” to the lectern where we gave a shortened reprise of our morning presentation. Titus streamed it on Facebook Live. The photo below is a still photo captured from that video. 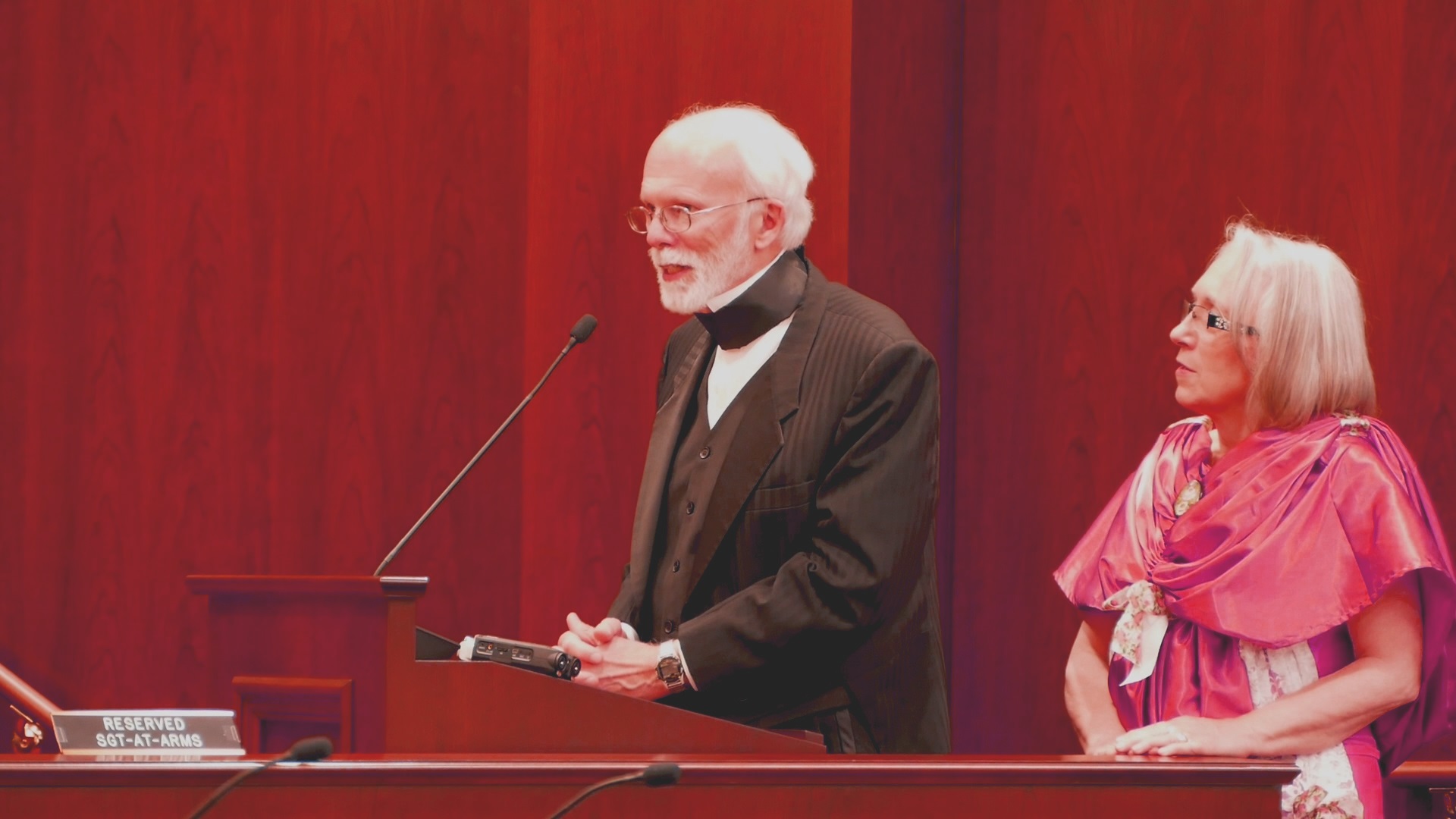 We were especially excited that our daughter who lives in Tennessee, her homeschooled children, and a friend and her homeschooled children were present for both of our Polk presentations. After the committee meeting was over, Mr. Windle took photos of us at the front of the committee room and we also asked him to pose with us for our own pictures. 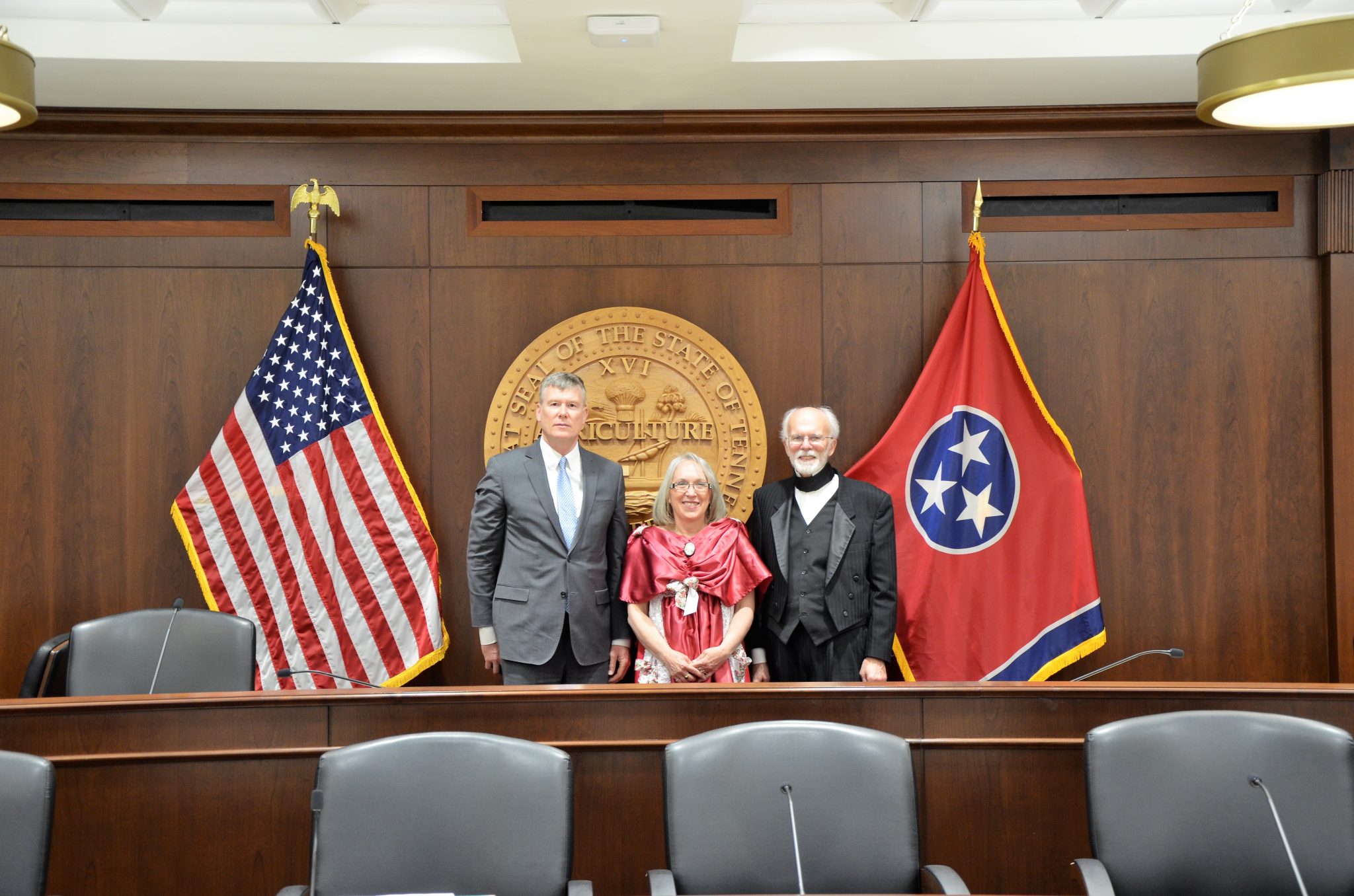 The surprises kept coming. He wanted us to accompany him to the tomb of President James Knox Polk and Sarah Childress Polk on the grounds of the capitol, so he could take pictures of us there. Ray, Titus, and I, along with our daughter and her children and our friend and her children, made the long walk to the tomb for those pictures.

The mortal remains of
JAMES KNOX POLK,
Are resting in the vault beneath.
He was born in Mecklenburg County,
North Carolina,
And emigrated with his father,
Samuel Polk, to Tennessee
In 1808.
The beauty of virtue
Was illustrated in his life:
The excellence of Christianity
Was exemplified in his death. 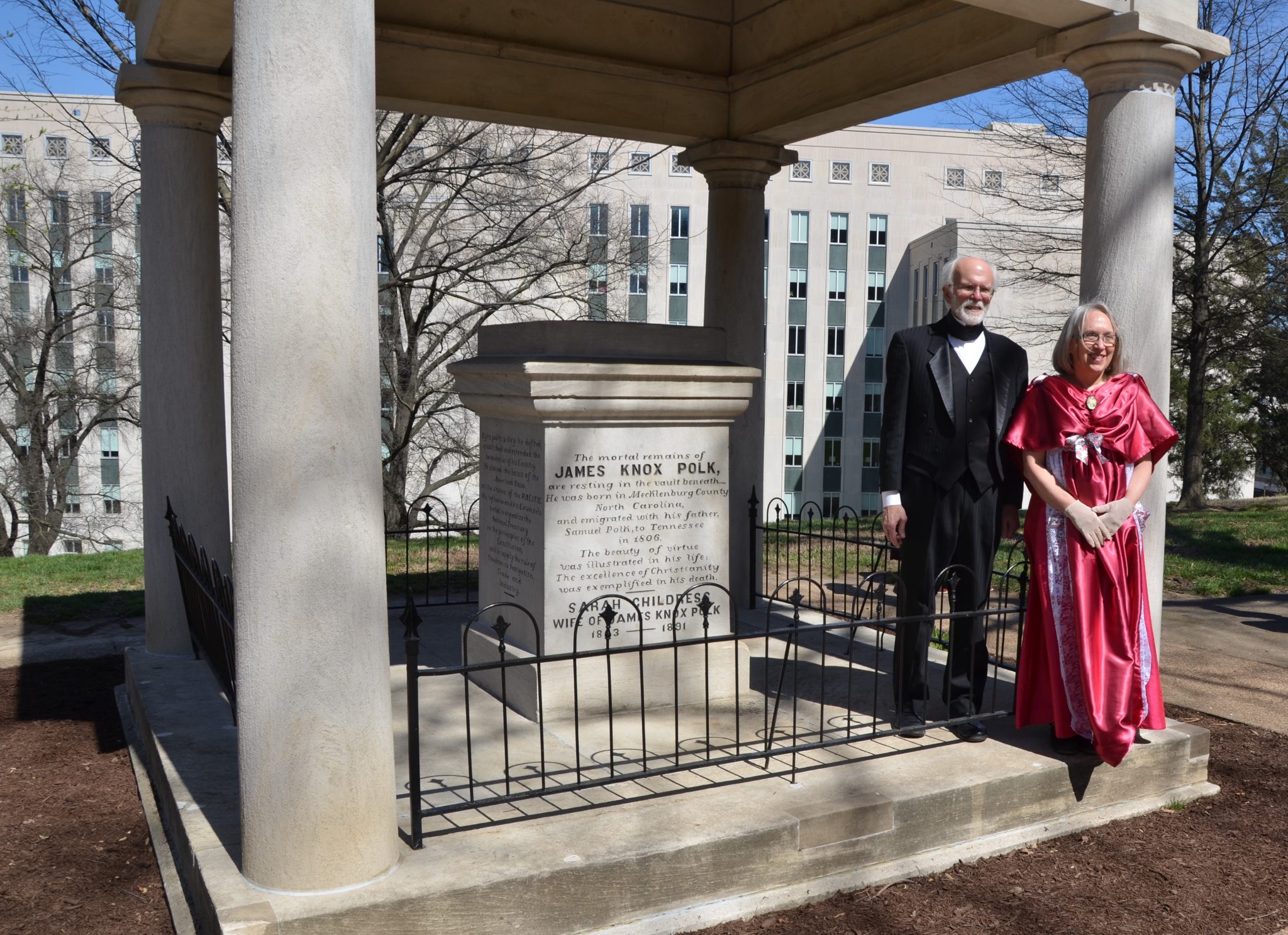 This is the inscription for his wife on the other side: 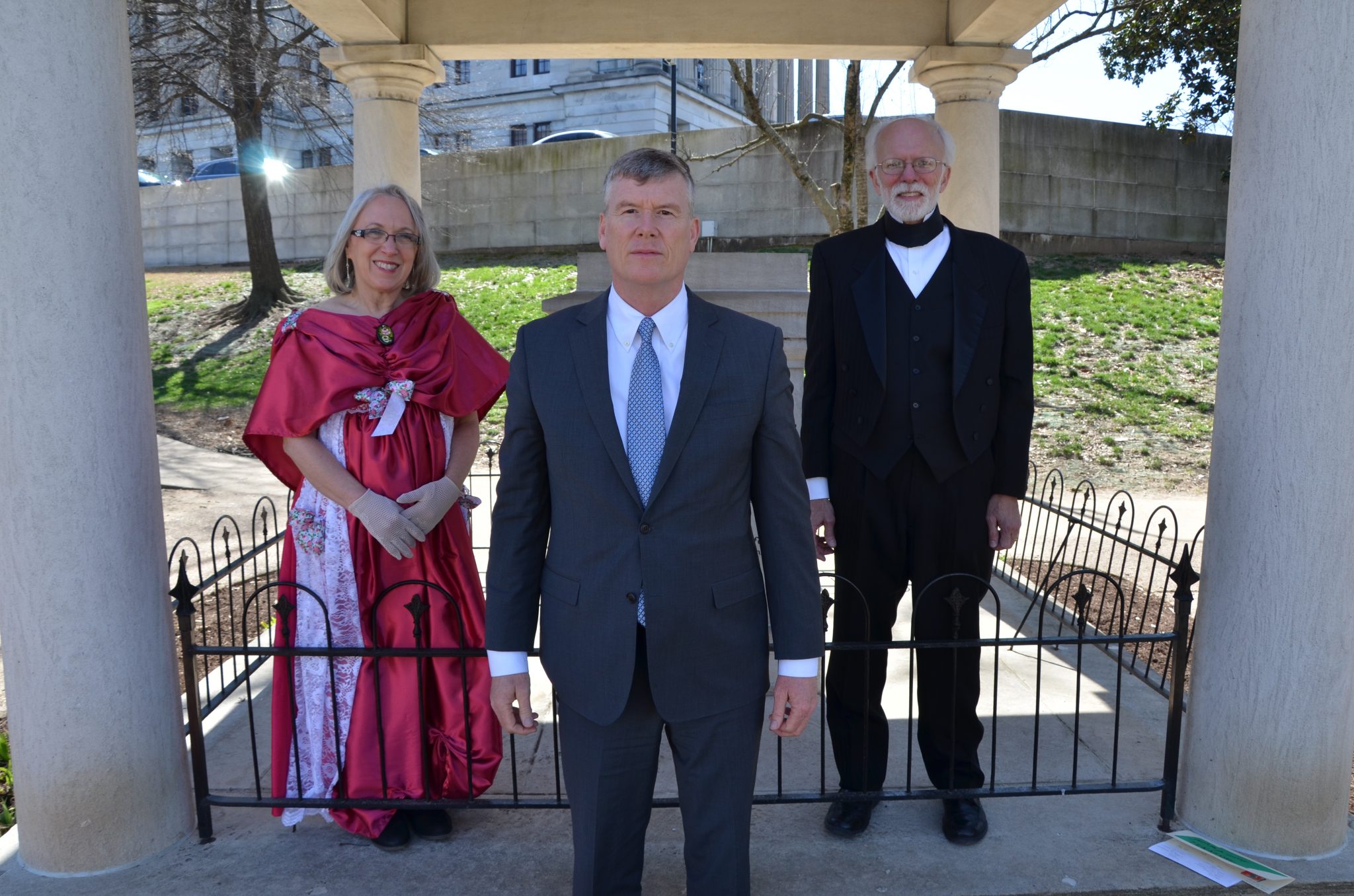 After all these kindnesses, Representative Windle took all eleven of us to another committee meeting where our state senator Paul Bailey was presiding. As we sat in the back of the room, he went to Mr. Bailey, whispered to him, and then left us for his other responsibilities. After we watched those proceedings for a while, Mr. Bailey introduced us to the committee and to the guests in the room. Thus ended our afternoon of surprises.

We said so long to our family and friends and rushed back to the lobby outside the house chamber. At many points during this day-long experience, we had opportunities to visit with homeschooling families and they gave us great encouragement. This continued in the lobby. We gathered up our Notgrass History display, hurried to get out of the capitol before closing time, and made the long trek back to our car — still in costume!

For many weeks, I have been thinking about contacting our government officials to share with them what the Notgrass History team is doing in their district. I have thought about emailing or calling or going to Nashville to meet with them. It was with deep joy that I watched God give us that opportunity in surprising and amazing ways that I never would have imagined.

Now to Him who is able to do
far more abundantly beyond all that we ask or think,
according to the power that works within us,
to Him be the glory in the church
and in Christ Jesus to all generations
forever and ever. Amen.
Ephesians 3:20-21 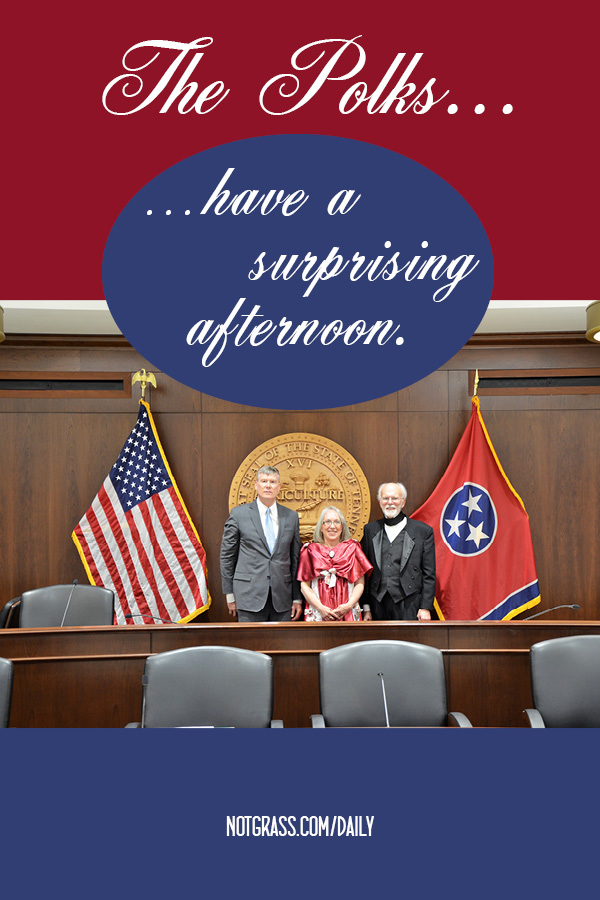