I became a teenager in 1966, when fellow teens and twenty-somethings were telling the “establishment” (that was anyone over thirty who did things the way things had been done before) that their old ways didn’t work. Actually most teenagers of the sixties were following in their parents’ footsteps and living as law-abiding citizens. However, the message that traditions were a bad thing got through to the masses. We have been skeptical of traditions ever since.

As homeschoolers we can be thankful for some of the results of this non-traditional thinking. After all, we are part of one of the most non-traditional movements of the twentieth and twenty-first centuries.

Of course we are in great company when we question traditions. It was our Savior who said:

However, Jesus didn’t reject all traditions–just religious traditions that made God’s commandments secondary. He even began a tradition Himself the night that He was betrayed, the tradition of remembering His Body and Blood in the Lord’s Supper.

So, are traditions a good thing or a bad thing? It depends.

I love family traditions. They can be great ways to teach our children how we value them. They can also give order to children’s lives. A child finds comfort in knowing what to expect at certain times, such as Sunday morning, at bedtime, or on holidays.

Of course, a tradition can become a problem when the tradition is made a higher priority than the people involved. For example, “We will have our evening devotional tonight, even though we got caught in traffic and didn’t get home until midnight!” Is anybody under ten really going to be blessed by that wonderful tradition on that particular night?

Mother, Ray, and I drove from Tennessee to our son John’s house yesterday, arriving in time for a relaxing evening with John, Audra, and Henry, an evening which included at least three family traditions.

Tradition One: After supper John surprised me with a birthday dessert that he made himself–a delicious cheesecake! That’s two delicious birthday desserts this year! Our daughter made me a pineapple upside-down cake when we were at her house for Thanksgiving. I know birthday cake with frosting is traditional, but our family has modified that tradition. We have learned that candles do well in lots of desserts, not just traditional birthday cakes. 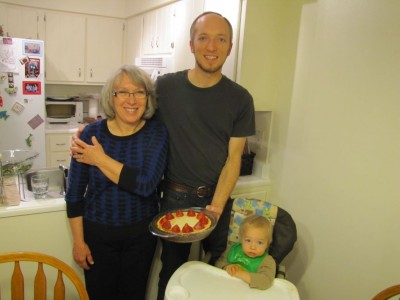 Tradition Three: Before bedtime John led us in a devotional. I especially cherish the memory of singing “Jesus Loves Me” with John, Audra, Henry, Mother, and Ray, precious loved ones with an age span of eighty years. Very special.