On our last day in Pennsylvania, we enjoyed the Pennsylvania Trolley Museum in Washington, an hour south of Pittsburgh. 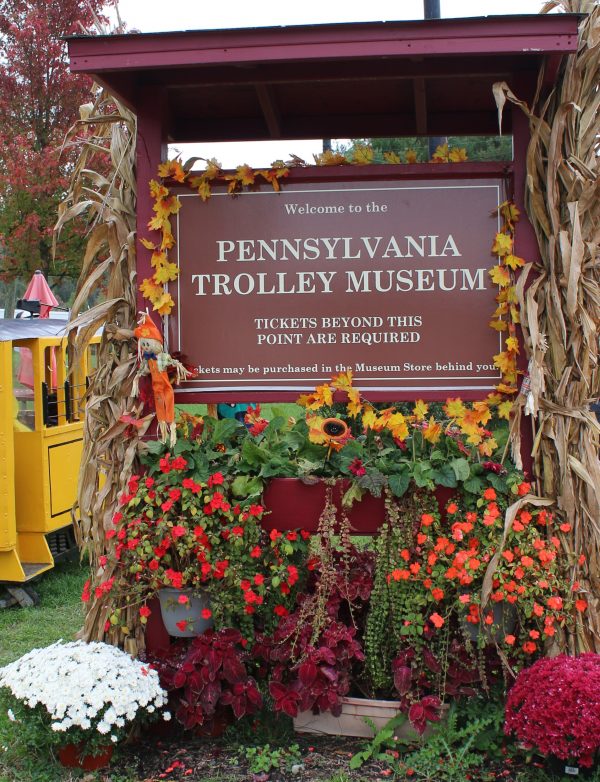 The Pennsylvania Trolley Museum has provided a home for historic trolleys since 1954. Today the museum has almost 50 trolleys. 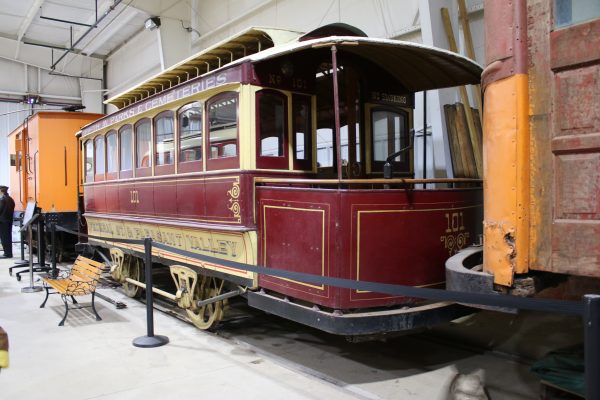 On the day we visited, three of those trolleys were giving rides on its two trolley tracks.

On our first trolley ride, we rode to the trolley barn which houses most of the museum’s trolleys. Inside we saw row after row. Suddenly I noticed an orange one and recognized it immediately. I didn’t know we were going to see anything related to Mister Rogers at this museum, but there it was—the trolley where Mister Rogers sat for one of his iconic photographs! I knew the photo well because we purchased the rights to use it in the “Mister Rogers: Neighbor to America’s Children” lesson in America the Beautiful.

I was so excited! One by one we posed for pictures. These are Ray’s and mine. 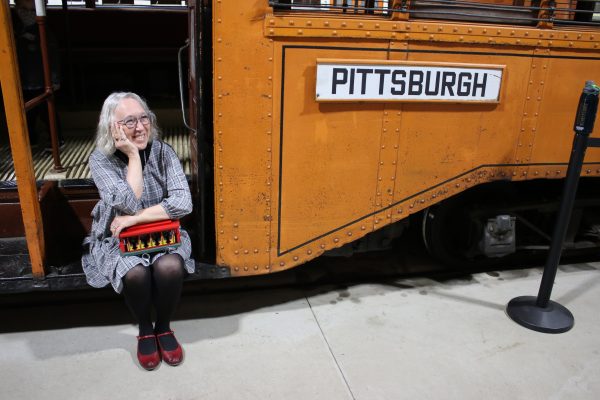 We learned that Mister Rogers drove a trolley while filming that episode, and we learned that that very trolley was one of the ones transporting visitors that day. We were so excited to be able to ride it on our longest trolley ride of the day! Here it is. 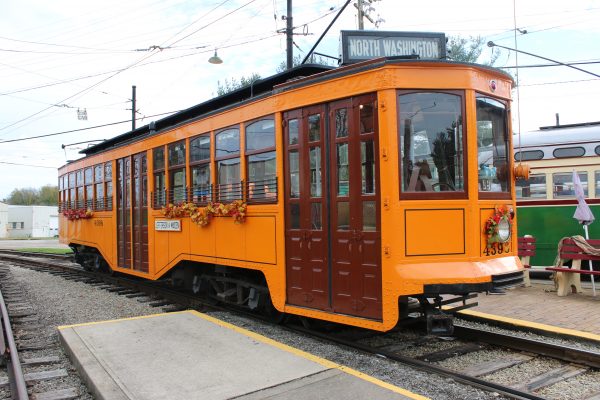 Above the seats in both trolleys were historic advertisements. I took the following pictures while riding the trolley Mister Rogers drove. One advertisement related to Christmas Seals. 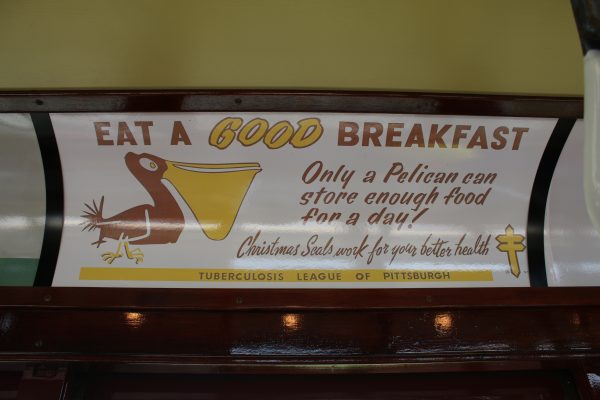 One ad was for Meadow Gold Sherbet. Sherbet, as well as the Meadow Gold brand, were staple treats during my childhood. 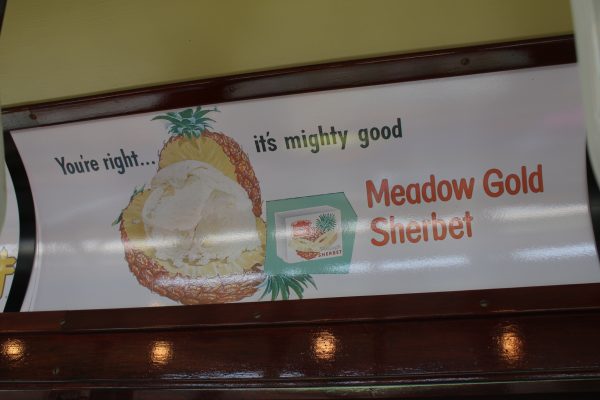 Another was for Philadelphia Cream Cheese. 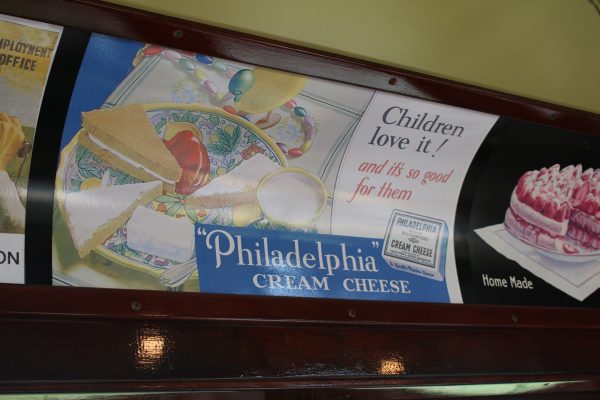 The following sign was evidently from the World War II era because in June 1941 President Franklin Roosevelt issued an executive order which forbade discrimination by defense contractors, directed that African Americans be accepted in job training programs in defense plants, and established a Fair Employment Practices Commission. 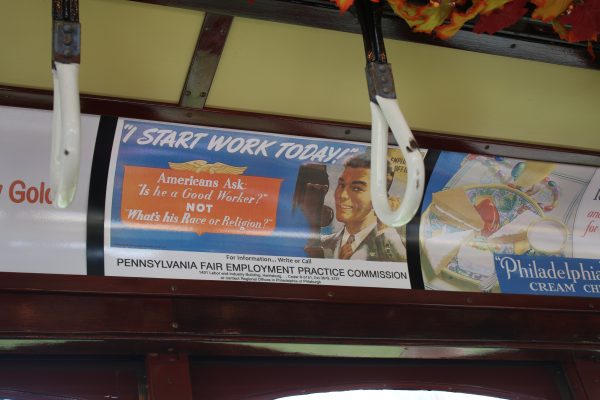 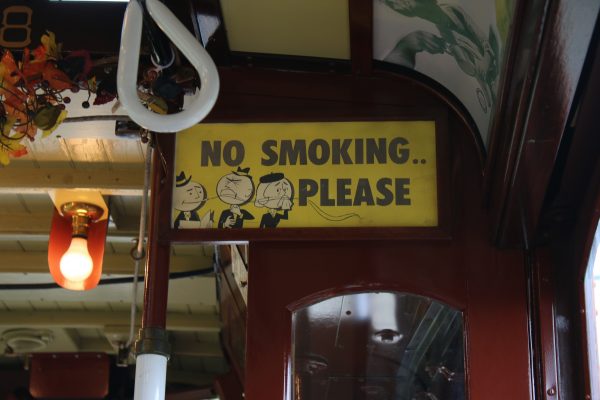 . . . and was surprised by the serious response for non-compliance. 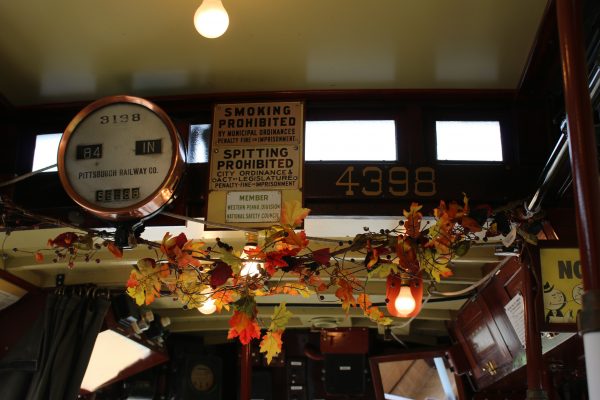 The Pennsylvania Trolley Museum has 150 active volunteers, including this lady who was delivering pumpkins for the many fall children’s activities going on the day we were there.

As I stood watching our grandchildren enjoy the activities, the volunteer told us that she would be happy to answer any questions. She told us one fascinating fact after another. We learned about the importance of trolleys in rural areas and about farmers using them to deliver their goods to the cities. We learned about trolleys with snowplows attached to the front, a fancy executive trolley, this trolley with a crane, and more. 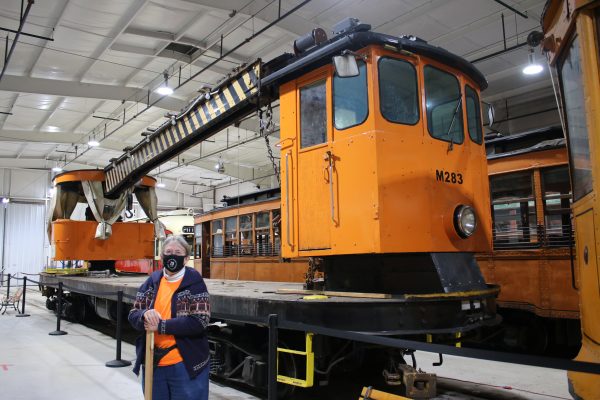 She also told us that her father had enjoyed riding trolleys during the 1920s and had developed a lifetime interest. He helped to begin the museum in the 1950s. I was impressed with her knowledge, dedication, and enthusiasm. “Your father would be proud of you,” I said. “He is,” she replied.

Astonished that a person who enjoyed trolleys in the 1920s could still be alive, I said, “Your father is still alive?” “He’s 100,” she said.

Imagine! Between them, this father and daughter have devoted almost seven decades to preserving trolleys and sharing them with others. That’s commitment! And what a delightful way to honor her daddy.

Honor your father and mother
(which is the first commandment with a promise),
so that it may turn out well for you,
and that you may live long on the earth.
Ephesians 6:2-3 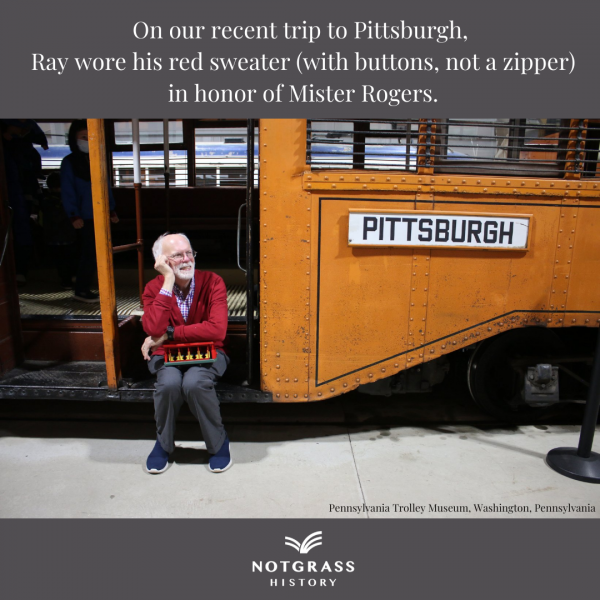