Playtime–a short and simple word so important to children. Children need to play and they need time to play. Now there’s a way to lessen homeschool stress. Relax for part of the day and let your children play.

I have great memories of our children using their imaginations at play. Though I have a long way to go in organization skills, I always thought it was important to keep our children’s toys organized. I never liked toy boxes, because it seems they end up holding a jumble of this and that. I liked to keep pieces together, so that their toys were fun to play with the next time, too. For me the best solution was to keep sets in separate containers on shelves and to make sure things got put back there periodically. Of course, it was fine with me if the ping pong table was covered with Lego soldiers in the midst of a battle that was to continue for the next day or week or month. It was also okay if the dress-up clothes were in a pile waiting for the next day’s performance of Cinderella on roller skates.

Let me introduce you to one of my own toys. Years ago Mother gave me this giant stuffed frog for Christmas. I was quite surprised when I first saw it. A really big frog? Then she told me that it was the last frog that an elderly woman at our church ever made. Miss Naomi was dear to me and she had made a lot of frogs. This was a sweet and special present from my mother. 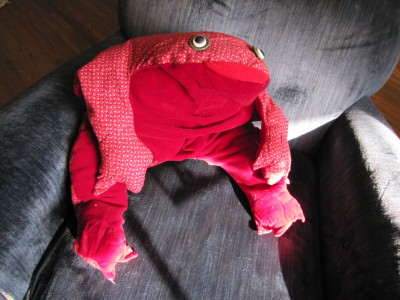 This style of frog was popular in the late 60s and early 70s. Believe it or not, people had velvet frogs with jewel eyes (though mine has buttons) just sitting around as decorations in their living rooms. If Pinterest had been around back then, the site would definitely have had instructions on how to make them. Most were much smaller and could sit on an open hand. My frog is a giant specimen of the velvetus jewelica eyeus species.

Now one of my greatest joys is playing with my grandchildren. The other day, when I was playing with Clara, I took a notion to dress up my frog and set it in Bethany’s doll high chair. What do you think? Am I reverting to my childhood? 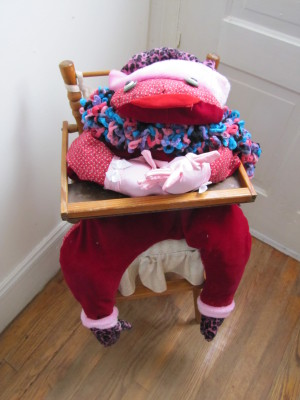 Play is important at our house. The grandchildren’s little coupe is parked between his desk and the cardboard house. Sometimes we just have to take time to play. All school and no play makes . . . Well, you know what it makes in your house!

Thus says the Lord of hosts,
‘Old men and old women will again sit
in the streets of Jerusalem,
each man with his staff in his hand because of age.
And the streets of the city will be filled
with boys and girls playing in its streets.’
Zechariah 8:4-5, NASB