Two years into the war in 1814, the British humiliated our new country by marching into Washington, D.C., and setting fire to both the U.S. Capitol and the White House. The two buildings had only been occupied for just under fourteen years.

A few months later General Andrew Jackson led forces to New Orleans. On January 8, 1815, Jackson and his troops won a major battle over British troops, which greatly outnumbered the Americans. The war was actually over; but because of slow communication, the American and British troops in New Orleans had not yet heard the news. American citizens were wildly excited about Jackson’s victory at the Battle of New Orleans.

Jackson’s home, the Hermitage near Nashville, Tennessee, celebrates two special days each year. The home traditionally offers half-price admission on Jackson’s birthday. We took advantage of that a few years ago and witnessed the wreath-laying at his grave. We also were privileged to see a distinguished visitor, Jackson’s great-great-great grandson, Andrew Jackson VI, a Knoxville attorney, at the ceremony.

On Friday night, our daughter Mary Evelyn and her husband Nate and Ray and I had a party at our house to celebrate the 4th. Some of the homeschool conventions where we exhibit have a section of booths for homeschool students who are young entrepreneurs. I bought this flag from one of them and was so excited that I remembered to hang it up for the party! 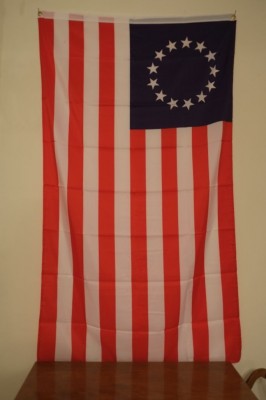 I bought the flag from a young tailor in Virginia. He didn’t make the flag, but he had tailored many items of historic clothing, including a colonial shirt and several jackets. I bought a bonnet and a pocket. This paragraph and photo has little to do with this story. I just wanted you to be impressed with this young man!

We had a potluck supper. Mary Evelyn performed “Paul Revere’s Ride.” Ray read the Declaration of Independence and led us in “The Star-Spangled Banner” (including verse 4). Nate did a fireworks show and shot his cannon–twice, just black powder (no cannon balls since the British weren’t coming).

While Ray was emceeing our little program, he mentioned that Francis Scott Key wrote “The Star-Spangled Banner” during the War of 1812. Brother Fox, an elder at our church who is about 75-80 years old, also serves as the mayor of our little 1,000-person town and the president of our local historical society. He has a servant heart and says beautiful prayers. We were happy that he brought his wife and a neighbor to our party. Brother Fox told the group that some of Jackson’s troops at the Battle of New Orleans had been recruited here in our area. The response of Tennessee men to the call for volunteers during the War of 1812 is what earned Tennesseans their official nickname, “The Volunteer State.” And to think, we live among the descendants of some of those very volunteers! I was excited. Right around here!!

Then Brother Fox’s wife Miss Helen spoke up and said that her great-great-great (I forget how many greats) grandfather participated in the War of 1812. She is descended from one of his twelve children from his first wife. His second wife applied for a War of 1812 widow’s pension and Miss Helen has the paperwork to prove her ancestor’s participation.

Brother Fox is not running for re-election as mayor. When I talked to Miss Helen about that several months ago, she said that being mayor is just something people do here when they retire. Brother Fox has done so much good for our little town and he’s done it out of the goodness of his heart. The position comes with a salary of $0, just like his roles as elder and historic society chairman.

Then those who feared the Lord spoke to one another,
and the Lord gave attention and heard it,
and a book of remembrance was written before Him
for those who fear the Lord and who esteem His name.
“They will be Mine,” says the Lord of hosts,
“on the day that I prepare My own possession,
and I will spare them as a man spares his own son who serves him.”
So you will again distinguish between the righteous and the wicked,
between one who serves God and one who does not serve Him.
Malachi 3:16-18