In romance a person often decides to follow his heart. A person who trusts her intuition when making decisions follows her nose. In the Wizard of Oz, Dorothy followed the yellow brick road. Fans follow politicians and entertainers on social media. When we sing at church we follow a song leader. In the photo below, members of the Sacred Harp Community of Vermont sing at a town hall in 2017.

I sat beside our three-year-old grandson during church yesterday. This little guy loves to “lead singing” at home. During one of the hymns yesterday, our song leader held up four fingers to tell us to skip verses 2 and 3 and go on to verse 4. I noticed our grandson looking down at his own hand with four fingers held straight and his thumb tucked in. He noticed that I had noticed and looked into my face with a knowing and adorable smile.

I usually take notes during church. When I hear or see something that I want to share with you, I write a B beside it and circle the B. On Sunday morning, I drew a cartoon hand indicating the number 4 and wrote the words imitation and example. Ray’s sermon was from the beginning of Philippians 4. By the time Ray was almost finished, I had four encircled B’s on my notes. When he finished with verse 9, I went back to my first B and the cartoon hand to note that verse which illustrated well what our grandson had done.

As for the things you have learned and received
and heard and seen in me,
practice these things,
and the God of peace will be with you.
Philippians 4:9

I recently bought a Christmas ornament decorated with the words “Let there be peace on earth.” I bought it as a gift for someone whom I thought would especially appreciate the message though surely most people long for peace on earth. I know that you and I do.

After an angel of the Lord announced Jesus’ birth to the shepherds:

. . . suddenly there appeared with the angel
a multitude of the heavenly army of angels
praising God and saying,
“Glory to God in the highest,
And on earth peace among people
with whom He is pleased.”
Luke 2:14

Jesus brought peace in many ways, and He continues to do so. One of the ways He brings peace to Christians is by teaching us how to live each day. There is peace in living in God’s will. We don’t gain peace by following our noses, our hearts, the yellow brick road, or politicians and entertainers on social media. Paul could tell the Philippians to practice what they had learned, received, heard, and seen in him, because Paul followed what he had learned, received, heard, and seen as a follower of Jesus.

We and our children need good examples to imitate. Our best example is Jesus. Our next best examples are others who follow Him.

Jesus answered and said to him,
“If anyone loves Me, he will follow My word;
and My Father will love him,
and We will come to him and make Our dwelling with him.
The one who does not love Me
does not follow My words;
and the word which you hear is not Mine,
but the Father’s who sent Me.
John 14:23-24 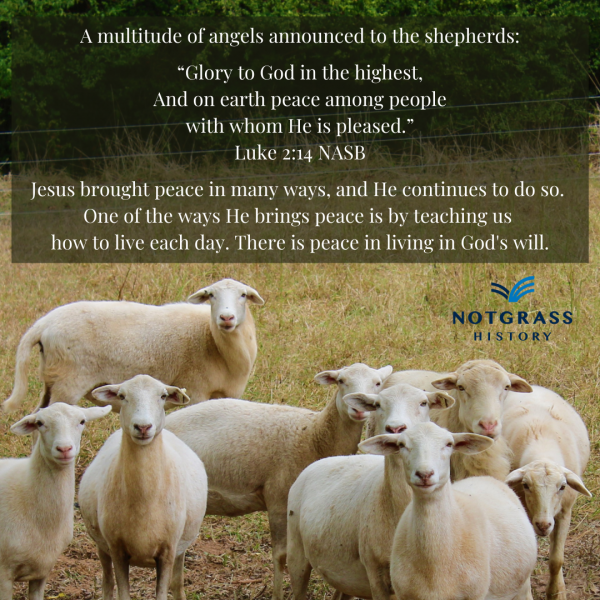