On Saturday Ray and I met our daughter Mary Evelyn and her family at the 19th annual Window on the World (WOW) festival at Tennessee Tech University in Cookeville. We enjoyed international food, entertainment, the many booths set up by various international student organizations, and running into people we know.

Our family arrived just in time to watch the Nashville Irish Dancers perform. When the group’s emcee invited members of the audience to dance with them at the end, Mary Evelyn, her two oldest children (5 and 3), and I joined them.

In the children’s craft room, we made Japanese fish kites, tried our hand at weaving, and made paper roosters since this year is the Chinese year of the rooster. For lunch Ray enjoyed his Egyptian choices and I my Saudi Arabian buffet. After lunch, we found seats on the front row to watch a group of martial artists from Knoxville perform the traditional Chinese lion dance. 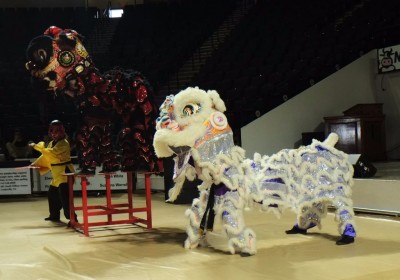 At the Turkish table, we watched a woman create beautiful pictures using the Turkish Ebru technique.

In Tennessee Tech’s basketball arena and fitness center on Saturday, you might never have known that any nation in the world had ever had a spat with any other nation. It was a bright, exciting, musical, fun, yummy, and peaceful event.

. . . and He made from one man every nation of mankind
to live on all the face of the earth,
having determined their appointed times
and the boundaries of their habitation,
Acts 17:26